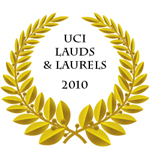 
The School of Social Sciences is pleased to have among its faculty, staff, students, alumni and community friends, five of this year’s 18 UCI Alumni Association Lauds & Laurels award winners.  Established in 1971, the awards recognize, honor, and celebrate the accomplishments of those dedicated to the University of California, Irvine. As a young girl, Lauren Collins wanted to be an Olympic gymnast. With her parents' full support, she dedicated herself to this goal, training hard with the best coaches five days a week. Then, in high school, everything changed. She grew in height - 6 inches her freshman year - ultimately reaching 6 feet. Too tall for gymnastics, Collins didn't outgrow her Olympic dreams; she simply exchanged her leotards for track spikes. Today, says coach Vince O'Boyle, she has become UC Irvine's best-ever women's track & field athlete, with a reasonable chance to make the 2012 U.S. Olympic team as a high jumper.  Learn more about Collins' accomplishments. A recent Rasmussen poll shows likely California gubernatorial candidates Jerry Brown (D) and Meg Whitman (R) in a dead heat for the state’s top job if pitted against one another come November.  Yet according to research from UCI political science graduate student Chris Stout, the news may be giving Whitman more cause for celebration. Based on a comparative analysis of polling data and subsequent election results for major state and national elections from 1982-2006 involving women and minority candidates, Stout found that women candidates often fare better in election outcomes than polls predict.  His findings were the topic of a research paper, co-authored with fellow graduate student Reuben Kline, that was selected as Best Graduate Student Paper in 2009 by the American Political Science Association’s Elections, Public Opinion, and Voting Behavior section. Learn more about Stout's research findings and accomplishments. If her Hawaiian pictures and soft streaming island tunes don’t put those who sit in her office at ease, her laid-back attitude will certainly do the trick.  As director of the School of Social Sciences’ personnel office for the past 13 years, Cindy Sasso’s good natured personality and positive outlook have been paramount to her success in what can sometimes be a difficult role. Learn more about Sasso's role in social sciences at UCI. Larry and Dulcie Kugelman, founding board members of the School of Social Sciences’ Center for Citizen Peacebuilding, have a long standing history of developing and promoting international peace building efforts.  From the local Orange County community to conflicted regions in the Middle East, their efforts and programs are helping people with opposing perspectives and viewpoints learn more effective communication strategies in hopes of finding common ground and ultimately, peace. Learn more about the Kugelmans' passion for peace. Jenny Doh, political science class of ‘91, may have spent her early years in Seoul, Korea, but she was born at UC Irvine. “I see the university as something I cannot and will not ever abandon,” said Doh. “It is my family, it is where I was really born.”  She came to campus in 1986 as a new freshman straight from Bakersfield, Calif. where her family had settled after immigrating some 10 years earlier.  By her own account, she simply fell in love with the campus. “I loved everything about it, even the design. It’s a circle, you can never get lost.” From those first few days on campus, Doh managed to never lose her way and, in many respects, has come full circle. Learn more about Doh's work with the UCI Alumni Association.

Join the School of Social Sciences and UC Irvine in celebrating this year’s award winners at the 2010 UCI Alumni Association Lauds and Laurels Banquet Thursday, May 13 at the Fairmont Newport Beach.  Further banquet details are available online.

Click here for a full listing of 2010 Lauds and Laurels award winners.