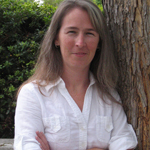 A bystander witnesses a crime and must recount to police the details of what took place. A catcher studies the cues of a runner on first in order to judge whether or not he'll attempt to steal second. A shopper avoids collisions in a crowded mall by paying attention to others' movements.

Whether the end result is catching a criminal or avoiding a head-on collision with hurried holiday shoppers, the ability to accurately pair together shapes, colors and motion is essential in creating our awareness of the world around us.

With a newly awarded $511,000 grant from the National Science Foundation, Emily Grossman, cognitive sciences assistant professor, will study how the human brain processes these complex patterns to formulate our perception and in which area of the brain it all takes place.

Using point light display tests - computerized moving dots that simulate a person's moving joints - she will test participants' abilities to accurately identify a number of characteristics such as the action the dots are representing, the gender of the person the dots are simulating, and whether the dots appear to be resembling a person at all.

At the same time, she will utilize functional MRI to monitor increases and decreases of activity levels in the superior temporal sulcus (STS) region of the brain where the neural processes for recognizing shapes, colors and motor activities are believed to come together.

Participant responses, coupled with any changes in brain activity levels, will help isolate which cues are most important for recognizing motion and where this process comes together in the brain.

Findings from the study will help researchers understand important behavioral and neurological functions associated with the motion perception process in humans. Further knowledge in this area, says Grossman, will contribute to a better understanding of the underlying causes of abnormalities - information which could be useful in developing future treatments for those with damage or abnormalities, such as the case in victims of stroke and individuals with autism and schizophrenia, respectively.

In the process, she may also shed light on potential inadequacies of current testing methods.

"Using simple motion pattern testing hasn't been proven to be effective for understanding the brain systems involved in natural vision in humans," says Grossman. By monitoring brain activity during biological motion processing, she hopes to provide evidence for or against their use in understanding brain functions in humans.

The study, which began in September, will run through August 2012.