Zeinab Kachakeche, language science graduate student, reflects on her research endeavors and experience as a mother pursuing a Ph.D. 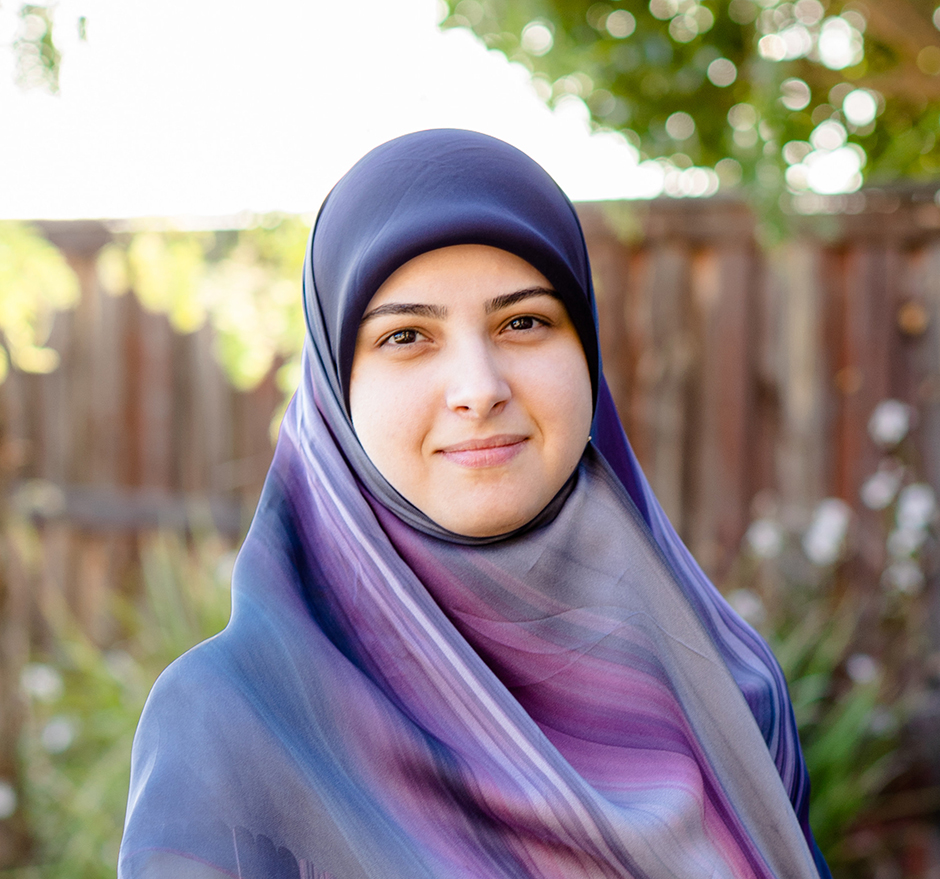 Since beginning her graduate studies, Zeinab Kachakeche has researched the differences between languages that put adjectives before nouns or after nouns (pre-nominal and post-nominal languages).

After becoming a mother, Zeinab Kachakeche decided to postpone her college career. Her unconventional road to graduate school strengthened her research abilities and invigorated her to excel in her classes. Now a Ph.D. student in language science at UCI, she uses a range of approaches to study how human language works and her bilingual background motivates her cross-linguistic research.

Unconventional undergraduate
When Kachakeche enrolled as an undergraduate student at UCI, she did so with her toddler and baby in tow. She had taken classes at a community college before having her children and was captivated by a course on language acquisition.

As a new mother, she observed her kids living out the textbook definitions of language learning in front of her eyes. So when she started as a transfer student at UCI, she knew exactly what she wanted to study: language science.

“Thinking back now, I couldn't have started at UCI at a more perfect time,” Kachakeche says. “The quarter arrived, UCI had just started the language science major and I had a passion for language.”

Since she had been out of school for two years, Kachakeche couldn’t wait to begin classes again. She returned to her coursework with vigor, beginning her research immediately upon arrival. She joined professor Lisa Pearl’s lab, where she was inspired to extend a research project from English speakers to Arabic speakers, as Kachakeche is a native Arabic speaker herself.

“Zeinab continues to impress me with her clear intelligence, her scientific communication skills, her work ethic, her emotional maturity, and her focus on broadening the foundation of language science research to better include the diversity of human language,” Pearl says.

After working with Pearl for a few quarters, Kachakeche heard about a crosslinguistic study conducted by Greg Scontras, also a language science professor, and jumped at the opportunity to help with the research. Kachakeche began running her own experiments and even received funding to continue her research through the Summer Undergraduate Research Program at UCI.

Moving on to language science Ph.D.
Energized by her undergraduate research, Kachakeche decided to apply to graduate programs and in 2020, she was one of the first enrollees in the new Ph.D. program in language science at UCI, which launched that same year. Since beginning her graduate studies, she has researched the differences between languages that put adjectives before nouns or after nouns (pre-nominal and post-nominal languages).

By analyzing a large dataset containing examples from 74 different languages, she was able to study whether speaking a language that uses pre- or post-nominal adjectives changes how often speakers of these languages use adjectives.

Her findings, which were published in 2021, show that pre-nominal languages exhibit higher rates of adjective use than post-nominal languages. She is now collaborating with researchers at Stanford University to create an interactive experiment examining how speakers of different languages refer to objects and what adjectives they use in doing so.

“The work is innovative and exciting,” says Scontras, “precisely the sort of interdisciplinary scientific study of language we wanted to create a home for when we designed our new graduate program.”

Why UCI?
Though she was accepted to several programs, UCI was her top choice because she felt so welcomed by the faculty. Although having kids while in graduate school may seem daunting, she encourages parents to pursue their passions and seek out a supportive department to work in.

The language science department has continued to expand since introducing its Ph.D. program in 2020, now comprising fourteen graduate students and six core faculty members. Two of the faculty members are new to UCI as of fall 2021: Xin Xie, who studies how perceptual flexibility shapes speech comprehension, and Connor Mayer, who studies how innate biases shape the language learning process. The department now encompasses a variety of types of research and is one of the only language science programs in the country.

“Keep in mind I wouldn't have done this without overall support,” Kachakeche says. “The department here is very supportive and I have a very supportive advisor. The faculty highly respect their students here.”

She hopes to continue on in academia and offer the same support to her future students that she has received.