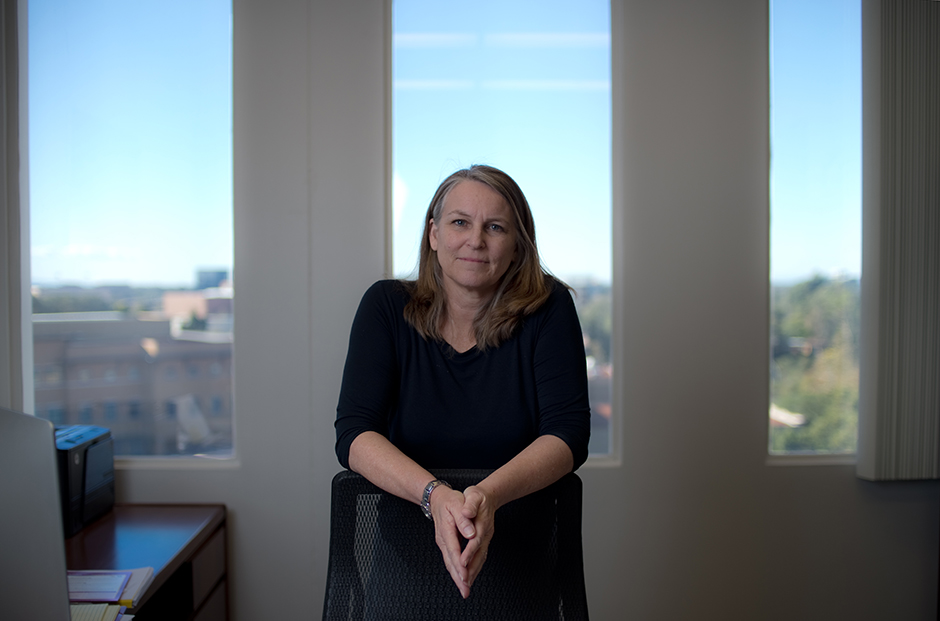 “I’m grateful for UCI’s role in the upward mobility space and I have enjoyed being able to be part of plans that help the campus serve the state and general public,” says Judith Stepan-Norris.

Hard-working. Consensus builder. Values-driven. The qualities colleagues use to describe Judith Stepan-Norris speak volumes about her character and commitment as both a career professor and campus administrator at UC Irvine. She was named the 2020 recipient of the campus Academic Senate Mid-Career Award for Service – an honor that spotlights her outstanding service and contributions to the university. Ask Stepan-Norris about the recognition and the work it represents and you get a response befitting her straightforward style: “I know my passions, work hard to make a difference and try to cultivate the expertise around me. It’s nice to be recognized for that!”

Humble beginnings
It’s a lesson the first-generation scholar learned growing up in a family of five sisters, a stay-at-home mother and union carpenter father who, in the early 1960s, built her family’s home from the ground up in an undeveloped area of Los Angeles. The family struggled with the seasonal nature of his job that ebbed and flowed with the economy; he twice travelled abroad for paid work – including trips to Antarctica and the equatorial Pacific where he logged long hours away from home on large government projects.

“Our Christian upbringing emphasized the importance of integrity and perseverance in whatever we took on,” says Stepan-Norris.

“We learned to treat people fairly and that you don’t get anywhere unless you try and try again.” For her, that meant attending college as a first-generation student, a path that equipped her with a framework for understanding her childhood experience as part of a working-class family surrounded by middle-class neighbors.

“Growing up, I experienced a lot of interesting social interactions that I didn’t understand – interactions where it was clear that the neighbors who’d built houses around us treated my family differently,” she says. “I didn’t really understand what that was; you’re not taught the framework for understanding the role of class or status in grammar or high school.”

During a sociology lecture by her subsequent mentor and co-author during her second year as an undergrad at UCLA, a light bulb went off; everything clicked. From that moment on, social justice became an underlying motivational current in what she pursued. She began to explore power differentials and the role of unions in leveling the playing field – a topic that gave her even more appreciation of her father’s work. She went on to complete her bachelor’s and Ph.D. in sociology at UCLA, and in 1990, she joined UCI as an assistant professor in the Department of Sociology.

Perseverance is something you learn through hard work and seeing it being modeled, like my parents did for me.

Research in action
In her 30-year career on campus, her research has explored interrelationships between union leadership, union democracy and workers’ consciousness and - more recently - she also focused on gender equity in higher education. She’s currently working on a book that synthesizes and analyzes data collected through a National Science Foundation grant on unions throughout the 20th century.

She notes that while most of her research takes a historical perspective, given that union membership has waned in the last half century, the pandemic has pushed to the forefront the precarity of workers in critical professions like healthcare, education and factory operations for food production – areas in which unions are still quite active.

“The virus doesn’t discriminate between high- and low-status occupations, but the way industries respond can,” she says. “From the doctors and nurses treating patients to delivery drivers, custodial crews and factory workers at meat packing plants helping to keep critical supplies flowing, exposure can happen unless the right equipment and safeguards are in place. Unions give workers a collective voice and position of power from which to advocate for needs. So how unions respond right now is critical.”

“The more my work helps to uncover solutions and furthers the pursuit of social equality, the better,” she says.

Campus and community service
The same principles that guide her research have served Stepan-Norris well in her many roles as an administrator at critical times in the campus’s young history. Right after she earned tenure as a professor, she was appointed as chair of the sociology department. The department grew extensively during her four-year term and she was instrumental in the recruitment of distinguished senior scholars, which led to the department’s rapid rise in rankings.

She went on to spend five years on the Academic Planning Group, three years on the Budget Work Group, and one year – 2009-10 – as chair of the UCI Academic Senate, a time period marked by campus budgetary constraints following the Great Recession. She also served as vice-chair of the Advisory Council on Campus Climate, Culture, & Inclusion, as the Social Sciences Equity Advisor, and as chair of the UC-wide Research Scholars Advisory Board for the ADVANCE PAID program. In 2014, she was appointed vice provost for academic planning at UCI, a role in which – among many duties – she helped craft the campus strategic plan and served until 2019.

“I’m grateful for UCI’s role in the upward mobility space and I have enjoyed being able to be part of plans that help the campus serve the state and general public,” she says. “The diverse residents of California deserve to have an accessible, high-status university that represents all racial and ethnic groups, and I’m pleased to see UCI moving in that direction. We’ve reached a period in academia when we are formally addressing a lot of inequities that have been around for a long time and I’m happy to have had the opportunity to be proactive in finding solutions.”

This past year, she was again appointed chair of the sociology department, a leadership role that drew from her extensive university experience to help the department and school navigate and thrive amid the challenges brought on by the pandemic, says UCI social sciences dean Bill Maurer.

“Professor Stepan-Norris owes her success to her no-nonsense approach to academic affairs, her knowledge of the systems that make an organization run and her passion for figuring out how to make them run better,” says Maurer. “She has always been down-to-earth and forthright. She is data driven - but also, refreshingly in our cynical and utilitarian age, values-driven, understanding that a university’s greatness comes not just from its ability to graduate the students while paying the bills but from its underlying commitment to surfacing our students’ and our colleagues’ best aspirations.”

For all of her time spent conducting award-winning research and helming leadership posts on campus, Stepan-Norris still enjoys teaching – whether in person or now virtual. And up until recently, she and her husband of 42 years could also be found on horseback in the Santa Monica mountains where they delivered needed supplies and occasionally rescued lost hikers as part of the State and National Park Service’s Mounted Volunteer Patrol. True to her Southern California roots, she’s taken up almost every outdoor activity the varied landscape supports – surfing, mountain biking and hiking with claim to successful climbs up Mt. Whitney and covering the Grand Canyon rim to rim (each in one day) – activities she’s enjoyed over the years with her husband, three sons and daughter.

“Perseverance is something you learn through hard work and seeing it being modeled, like my parents did for me,” she says. It’s served her well through all tasks she’s tackled as a researcher, public professional and family member. “I hope I succeed in passing on to others my passion for leveling the playing field, so that everyone – no matter what type of disadvantage they face – has a chance to shine.”