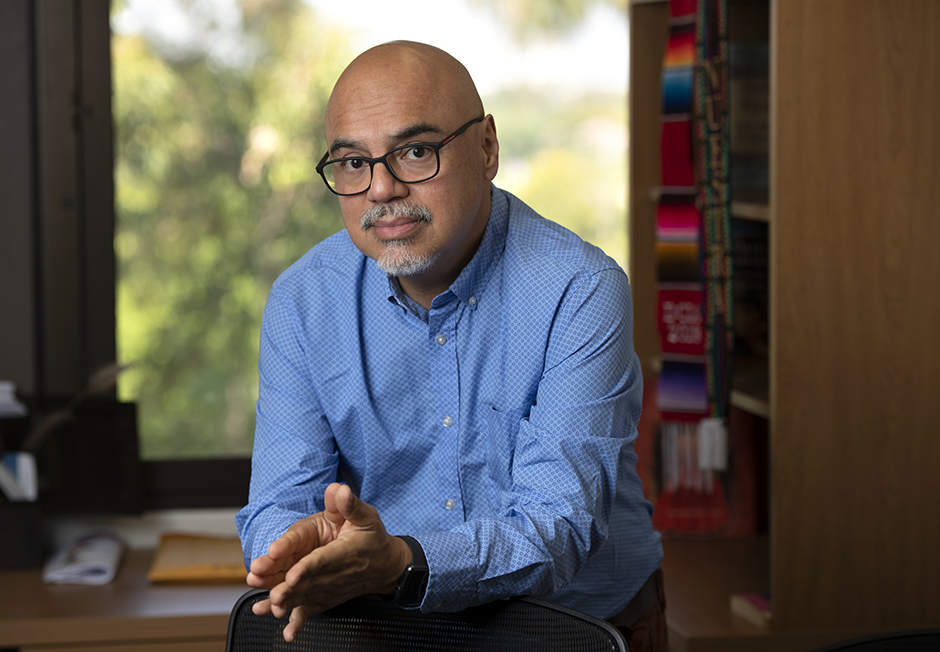 An accomplished journalist, Tobar won a Pulitzer Prize for contributing to the reporting of the Los Angeles riots for The Los Angeles Times.

Growing up in neighborhoods throughout Los Angeles, Héctor Tobar did not know he would one day become a full-time writer. In fact, he did not even know writing could be a profession, even though his early life was filled with an appreciation for literature.

This might come as a surprise to those who are acquainted with Tobar’s literary work. The UCI associate professor of Chicano/Latino studies and literary journalism has authored four books, including the New York Times Best Seller, Deep Down Dark: The Untold Stories of 33 Men Buried in a Chilean Mine and the Miracle That Set Them Free, which was adapted into a film starring Antonio Banderas.

An accomplished journalist, Tobar won a Pulitzer Prize for contributing to the reporting of the Los Angeles riots for The Los Angeles Times. His short stories have also been widely published. Tobar, who earned his M.F.A in fiction from UCI, now teaches writing courses through the UCI School of Humanities and School of Social Sciences.

Tobar’s love for the literary world stems not from a long lineage of avid readers and writers; on the contrary. His father, who migrated from Guatemala at 21-years-old, only made it to 6th grade. His paternal grandmother was illiterate. Once in the United States, his father immediately attended night school and picked up English rather quickly, which led to an insatiable appetite for literature in both English and Spanish. At 78-years-old, he still reads one book a week.

You know, we’re small against all of the injustice in the world, but in that one moment, in this one space that you’re creating in building this story, you feel like you’re the master of it.

“My father carried this shame,” says Tobar. “I think that’s present in a lot of Latino families: this sense that we have been denied the chance to fulfill ourselves as human beings, to express all of our humanity. So my father subconsciously passed that on to me: this desire to be seen, to have one’s humanity seen completely.”

As an undergraduate at UC Santa Cruz, Tobar was set on becoming a doctor. But that quickly changed after he took his first Latin American studies course and discovered the region’s tumultuous history for the first time; he made it his new major.

He recalls how his professor would thoroughly markup his work, which made Tobar feel like the professor truly respected him as a thinker. This encouraged him to contribute his writings to publications at his school, however, it still didn’t occur to him that he could write for a living. After working in childhood education for a while, Tobar began to volunteer at a community newspaper in San Francisco called El Tecolote, where he became an editor at age 23.

That’s when it all clicked, and he thought, “This is what I really want to do as a profession.”

He hasn’t stopped writing since, which he describes as a continuous challenge to create something totally new each time - to construct an entity. He does this through essays, short stories, novels, articles - and often all at once as he juggles multiple projects. He incorporates the styles of fiction into his essays, and nonfictional elements into his novels.

Tobar says that fiction has made him a better journalist and essayist. He recently wrote an essay for The New Yorker about growing up Latino in this day and age, where he recounted finding out that he was next-door-neighbors with James Earl Ray, the man who assassinated Martin Luther King, Jr. He was only five-years-old at the time he lived in that East Hollywood neighborhood, so he didn’t realize it then. To make this world come alive, he used his imagination (without deceiving the reader) to reconstruct that past.

These techniques contain the essence of literary journalism, which combines the art of language and the practical nature of research and gathering information. Tobar’s courses at UCI allow students in the social sciences the opportunity to engage in the world of literary journalism, since all of his classes, such as Writing Race, Writing the Latino Experience, and Introduction to Chicano/Latino Studies, surround a major, creative writing assignment. Tobar says that literary journalism is an advanced form of storytelling that gives students tools with which to become thinkers and writers about the world.

“I tell people, ‘Write me a story, that’s the assignment. Write me a story that’s going to capture my attention. Your job is to make me cry, make me laugh, make me angry, intrigue me,’” he says. “So I collect all these stories, and they’re from all over the state: an undocumented kid from the central valley who has to get on stage and play a Morrissey song; a young woman who leaves from here every weekend and describes her bus journeys back to Calexico to see her friends and family; a kid that grew up in a farming family in Ventura county. There’s such a paucity of truly outstanding nonfiction, and I think about the contemporary experience of people who are under 30. It’s really limited and it’s hard to find, especially about people of color. There isn’t anything better that I could have people read than to read those things.”

Reflecting the diversity of the students, the readings include stories told by African-American, Latin American, Chinese, South Asian, and Arab writers.

“What’s important about that is that people realize that they are actors and that their people have always been actors in the American story,” says Tobar.

The professor pays tribute to a unique American story in his fifth book, a novel that will be published later this year. The Last Great Road Bum is based on the real life of Joe Sanderson, a white American who fought in the Salvadoran civil war, on the side of the Ejército Revolucionario del Pueblo (ERP). Sanderson died with his backpack on, which contained a vivid diary about the war and also revealed that he had spent the last 20 years traveling the world, witnessing wars in three different continents - in hopes of finding the perfect story to tell. Eleven years ago, Tobar found a copy of Sanderson’s diary and took it upon himself to write a novel based on his life - to share a story that had previously been denied.

“The story is really about me, and it’s about being a father and it’s about feeling the corruption in the world. You know, we’re small against all of the injustice in the world, but in that one moment, in this one space that you’re creating in building this story, you feel like you’re the master of it.”