ahead of the CURVE 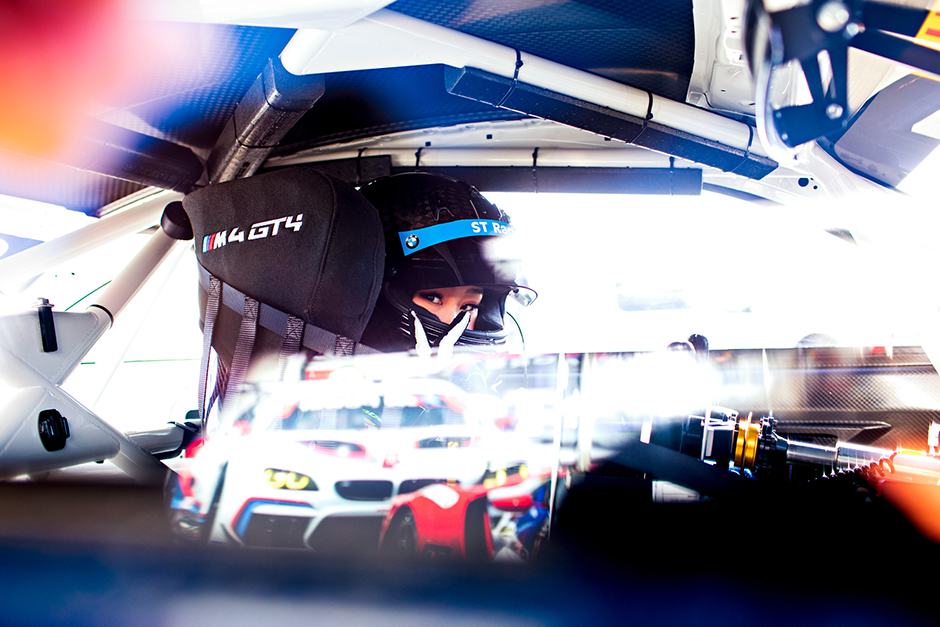 Like any social sciences student, Samantha Tan ’20 studies, works out at the gym, and hangs out with friends. But as a professional race car driver, she is anything but typical. Tan is breaking ground internationally as one of the fastest and youngest women in her racing class, and inspiring legions of young girls along the way.

Growing up outside of Toronto, Canada, Tan’s love affair with speed began at the tender age of 5, when her dad gave her a motorized Jeep. She drove the toy car so fast, and turned so aggressively, that she drifted all over the driveway.

Tan learned to drive a real car when she was 12, seated on a pillow to help her see over the steering wheel. By the time she was 14, she became the youngest driver to attend the Ferrari Driving Experience at Quebec’s Le Circuit-Mont Tremblant. And at an age when most of her peers were getting their driver’s licenses, she was racing her Mini Cooper in the Canadian Touring Car Championship, where she took 5th place.

Her speedy ascent in the world of racing was not universally welcomed.

“There aren’t that many females in the automotive industry, so we have to go into it being tough skinned,” she says. “Whenever I see negative comments, it’s just motivation for me to prove them wrong. I just get angry and I go faster.”

Zot speed
When Tan started looking at colleges, Southern California beckoned, with its strong community of car enthusiasts, proximity to racing tracks, and the promise of year-round driving weather. UCI ended up being the perfect fit, and as soon as she posted a photo of a stuffed Anteater on her steering wheel to her Facebook page, fellow Anteaters started reaching out to welcome her to the family.

With her dad being a business owner and her mom a financial analyst, Tan chose to follow in her parents’ footsteps academically and major in economics.

Be proud of who you are, and don’t let anybody tell you what you can’t do.

The biggest challenge, she says, was learning to balance school and racing. She competes in six or seven events during a typical racing season, which runs from March to October. Each weekend includes a practice on the track, a qualifying race and the final event. Because of the grueling schedule, college can be a challenge for racecar drivers.

“Samantha is a very responsible student, who took ownership of her class schedule and her academic career,” says Chika Kono, associate director of undergraduate student affairs in social sciences and Tan’s academic advisor. “She actually never told me that she was racing, but it speaks volumes that at UCI, she didn’t feel like she had to choose between her passion and her education.”

To make it work, Tan doubled down on her organization and time management skills - and gratefully accepted help from classmates, friends, and TAs. And sometimes, she just has to make it work, like in winter quarter when she raced all weekend, and flew home Sunday night to take a midterm on Monday morning. 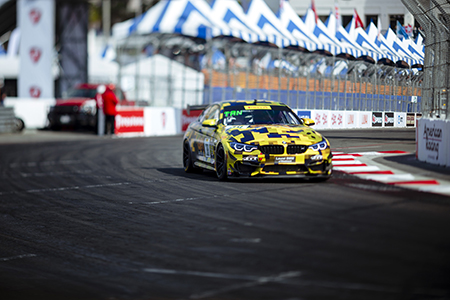 “There aren’t that many females in the automotive industry, so we
have to go into it being tough skinned,” says Samantha Tan ’20 economics.


In the driver’s seat
Tan trains year-round for the rigors of racing, spending time on cardio at the gym, go-kart racing, and using virtual reality simulators to prepare for specific tracks.

“Driving is 85 percent mental but at my level, the physical aspect definitely does help,” she says. “Cardio endurance training helps lower your heart rate and control your breathing.”

In an hour-long sprint race, wearing three layers of clothing and protective gear, temperatures in the driver’s seat can get up to 110 degrees. Braking at the turns requires 90 pounds of pressure on the pedal. And, it takes nerves of steel. She’s been bumped by other drivers, had to swerve around debris, and once even crashed into a wall at 100 m.p.h. – and walked away with just a sprained ankle.

The physical demands of racing are often given as a reason why it’s remained a man’s sport for so long. But science disagrees.

Tan participated in a Michigan State University study, published last year in the journal Medicine and Science in Sports and Exercise, that compared heart rate, breathing rate, and body temperature among male and female drivers while racing, and found no difference in how the men and women react to stress on the track. The authors concluded women will eventually win racing championships. And that’s motivating – and self-affirming – news for Tan.

To improve her performance, after every session, she reviews data from her cars, evaluating when she’s braking too early, or where she could carry more speed through a corner.

“I like calculated risks - that sets me apart from some drivers who are very instinctual,” Tan says. “The data, and seeing the numbers, that definitely helps me.” And having a solid background in data tools, thanks to her economics training, provides her firm footing in how to accurately examine risk and reward both on and off the track. 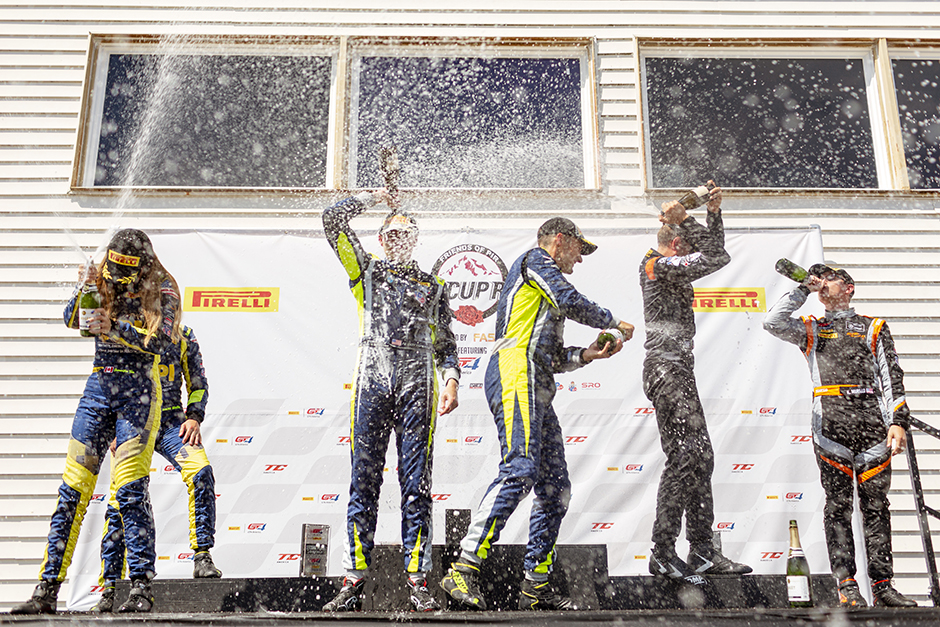 UCI’s Samantha Tan isn’t afraid to break barriers, and with her work, she’s paving a path for others to follow.

Paving the way
In 2016, to gain greater control over her race career and her team operations, Tan pitched her dad the idea of forming their own race team. He didn’t need much convincing.

“Cars and racing are a hobby for my dad, and he’s living vicariously through me,” Tan laughs.

Her team, ST Racing, now includes two BMW M4 GT4s, six mechanics, and four drivers, including her. She placed second at the Circuit of the Americas in Texas last year, her first time making the podium in the GT4 driver championship. She also made history there, when she was one of two women (the other being Harvard University student Aurora Strauss) both leading the race in their respective classes, at the same time.

One of Tan’s favorite things to do after races is meet fans, many of whom are young girls, excited to see a woman behind the wheel.

“Even if people say that you can’t do something because of your gender or your age, which I definitely experienced when I first started racing, I want these girls to know that they can be successful,” says Tan. “You just have to put the time in and the dedication.”

Tan has her sights set on becoming the first woman to win the Dubai 24 Hour Race, an endurance race in which she and her teammates take turns driving. She gave it a go last year, but the competition ended early when heavy rains flooded the track.

“Samantha is making a name for herself as a woman in racing, which is still not very common,” says Noah Stein, a fourth-year mechanical engineering and German studies major, who is a friend of Tan’s and team manager of the Anteater Formula Racing race car engineering project. “But she is very modest, and she works hard so that her driving talent on the track speaks for itself. With that mindset, she has risen and will continue to rise above her rivals’ expectations.”

After graduating, Tan hopes to put her economics degree to use by becoming ST Racing’s business manager, taking more leadership of the team’s statistics and operations.

“As a young Asian female, I fit in a lot of minority categories, and I’ve been fighting stereotypes my whole career,” Tan says. “But I tell people to be proud of who you are, and don’t let anybody tell you what you can’t do.”