An Thien Nguyen, ’20 political science focuses her research,
outreach and empathy on the Southeast Asian community

An Thien Nguyen ’20 has garnered numerous awards and scholarships while at UCI, from being named Outstanding Undergraduate Student by the Alumni Association to making the cut as a finalist for the highly competitive 2020-21 Fulbright U.S. Scholar Program. As one of the student commencement speakers for the School of Social Sciences class of 2020, Nguyen will have the opportunity to address her peers at their long-awaited ceremony, albeit remotely.

With every new accolade, Nguyen is reminded that the life she inhabits is one her parents could never even have dreamed for her.

“Because I’m so deeply rooted in my family and where I come from, a lot of my drive comes from wanting to take hold of every opportunity my parents couldn’t have,” says Nguyen, a political science major in the School of Social Sciences.

Nguyen’s parents met in Los Angeles, but share harrowing stories of escaping from Vietnam amid war and political turmoil. Her mother was incarcerated for two years after one of her many attempts to flee her homeland, and Nguyen’s parents both spent time in refugee camps before emigrating to the U.S.

“The unspeakable violence caused by war, and the trauma my parents experienced, is very difficult to talk about,” explains Nguyen, who urged her parents to share their personal stories with her once she was in college. “I wanted to know more about my parents because I wanted to know more about myself. Oral histories are so valuable to me because there are so many lessons embedded in those narratives.”

That desire to understand what her parents faced went beyond family bonding and became the driving force behind Nguyen’s undergraduate research and advocacy. 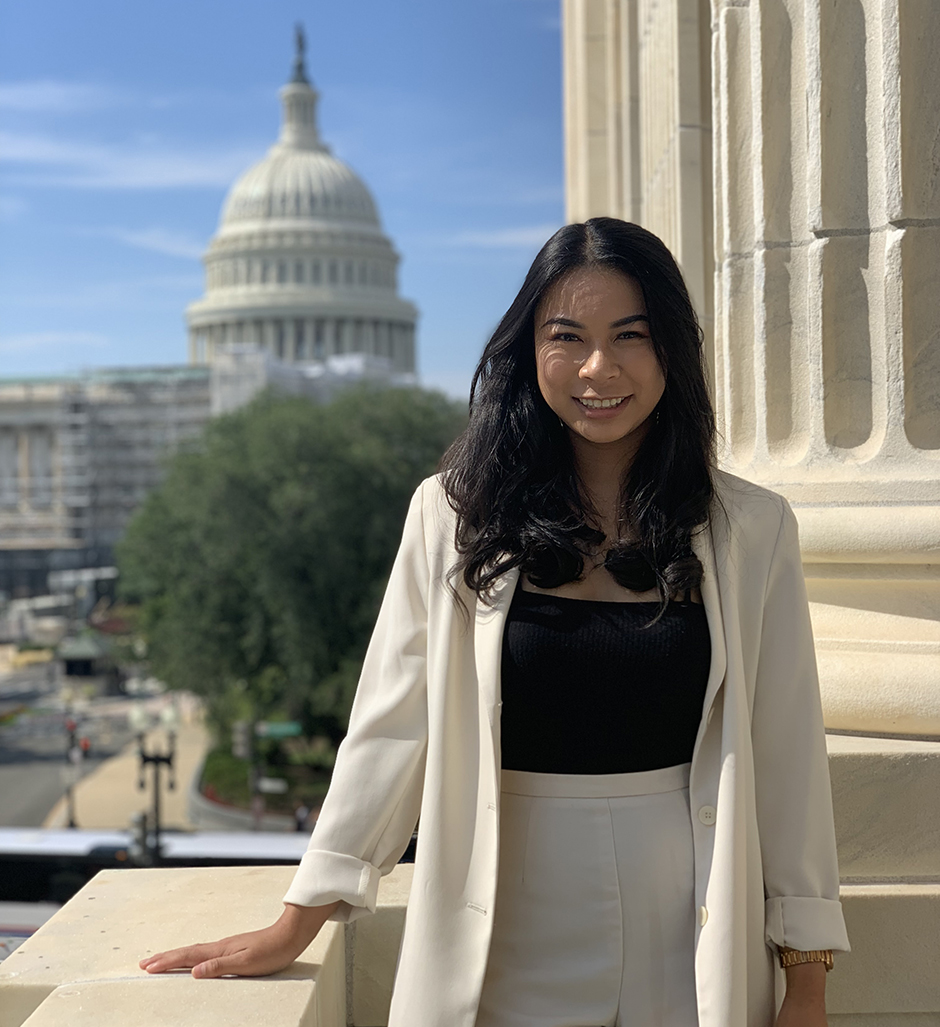 Engaging with politics
Nguyen didn’t plan to study political science when she came to UCI. She enrolled as a biological science major which, she laughs, “is such a clichè.” After a difficult initial quarter, she took a first-year writing course taught by a political scientist, and it changed the trajectory of her academic career. She switched to a full load of political science courses, and solidified her love for the subject.

Nguyen seized every opportunity to engage with politics at UCI beyond the classroom, including through the Model UN, Global Connect, the Summer Undergraduate Research Program, and UC Student Organizing Summit.

In her campus job at the Scholarship Opportunities Program, she advised other students on scholarship programs that aligned with their interests and goals.

She became so well versed in scholarship opportunities that she earned quite a few herself.

As she overcame the rocky start to her academic career, Nguyen wanted to help make sure other students like her have successful starts to their own, so she became involved with the First Generation Quarter Challenge, a 10-week program in social sciences that covers time management, financial literacy, and campus resources for new students who are the first in their family to go to college.

“I wish I had this program as a first year, it would’ve helped me navigate the space better,” says Nguyen. “It’s a lot to ask incoming first years or transfers to think about things like ‘What is your impact going to be?’ or ‘Where do you want to go?’ but that’s the mindset that we all have to come into. My personal growth didn’t come until a lot later because no one was asking me those questions my first year.” 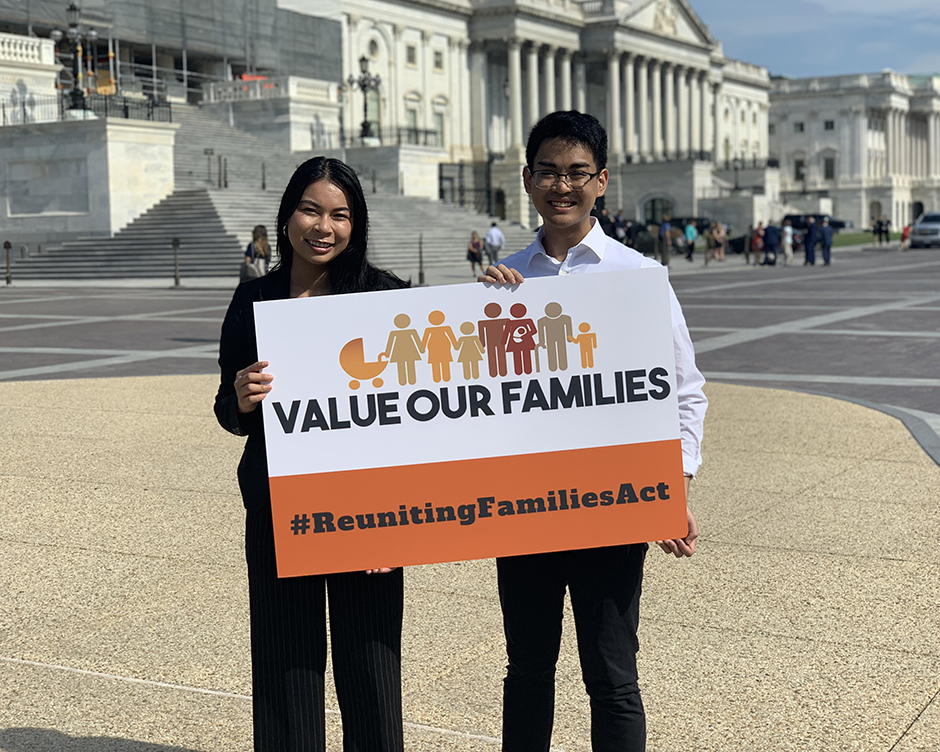 Making connections
Pivotal to her personal growth and success at UCI was finding faculty members who believed in her and encouraged her to push her own limits. Those included Jeanett Castellanos, social sciences associate dean of undergraduate studies, as well as Long Bui, associate professor of global and international studies, and Davin Phoenix, assistant professor of political science.

“When I met An, it was clear she was passionate about community and social change,” says Castellanos, who became a research advisor and mentor to Nguyen. “Over time, I have watched An develop her research interests and skills to find ways to represent her community and its voice.”

With Castellanos’ support, Nguyen threw herself more deeply into scholarly research, an endeavor that engaged her with Orange County’s thriving Vietnamese community, and then extended to the nation’s capital and across the Atlantic Ocean to Scotland. An Thien Nguyen interned for the Southeast Asia Resource Action Center (SEARAC) in Washington, D.C., raising awareness about issues facing immigrants from Vietnam, Cambodia, and Laos.

In this process of exploring the unique challenges faced by Southeast Asian immigrants, Nguyen often heard stories of hardship and trauma, not unlike those of her parents.

Through the UCDC program, Nguyen interned with the Southeast Asia Resource Action Center in Washington, D.C., interviewing Southeast Asian immigrants who had been detained by Immigration and Customs Enforcement (ICE) and writing articles and op-eds to raise awareness of the plight of hundreds of Cambodians who have been deported from the only country they ever called home.

Back in Orange County, she met with seven local organizations to better understand gaps in services - legal, social, financial, emotional - for Southeast Asian immigrants in the region, services that, Nguyen says, could ideally come together in a more holistic approach. She also interned at the City of Irvine, where she got a first-hand view of local policy-making.

In her final year as a UCI student, Nguyen landed an internship with the United Nations House in Scotland, researching Southeast Asian experiences in Britain.

“An has tremendous self-initiative and challenges herself,” says Castellanos. “She shows a unique drive that demonstrates a desire to perform to be a social change agent.”

If I didn’t have the courage to be bold, to be unapologetic, to be OK with putting myself out there regardless of the outcome, I would never have opened myself up to all of these opportunities and connections.

Research with rapport
One revelation that came to Nguyen as a result of all these experiences was that she doesn’t just want to strictly collect data and publish research - she wants to make a difference in people’s lives.

“I realize I want to do ‘community participatory research’ and really get in touch with the community I’m studying and build rapport with them,” says Nguyen. “I really thrive off of that connection.”

After she graduates, Nguyen plans to pursue a doctorate in sociology, and follow in the footsteps of a few of her favorite UCI faculty.

“Seeing professors who were people of color and had such a wide batch of experiences, who want to serve undergraduates and students who are minorities, really inspired me,” says Nguyen.

She hopes to become a professor not only to continue her research, but to mentor the next generation of students to see the possibilities that exist for themselves as educators, researchers, and policymakers.

For future research, she hopes to travel to Cambodia to study a nonprofit that helps people integrate into the country if they have been deported from the U.S. or elsewhere. It’s a model she thinks may be duplicated in Vietnam, Laos, and elsewhere.

Nguyen urges other students, including a younger brother at UCI, and a younger sister, to allow themselves to be both brave and vulnerable. She cherishes the deeper connection she made with her parents when they opened up to her about their past, and she says that others open up to her when she has allowed herself to be vulnerable.

“If I didn’t have the courage to be bold, to be unapologetic, to be OK with putting myself out there regardless of the outcome, I would never have opened myself up to all of these opportunities and connections,” she says.

And for Nguyen, connections will always start with family, even as her focus and impact expands to immigrant communities around the world.