From couchsurfing to Columbia Law

from couchsurfing to
COLUMBIA LAW

How Alexander “Sasha” Yusuf, ’20 sociology, has overcome every
obstacle thrown his way to realize his educational aspirations 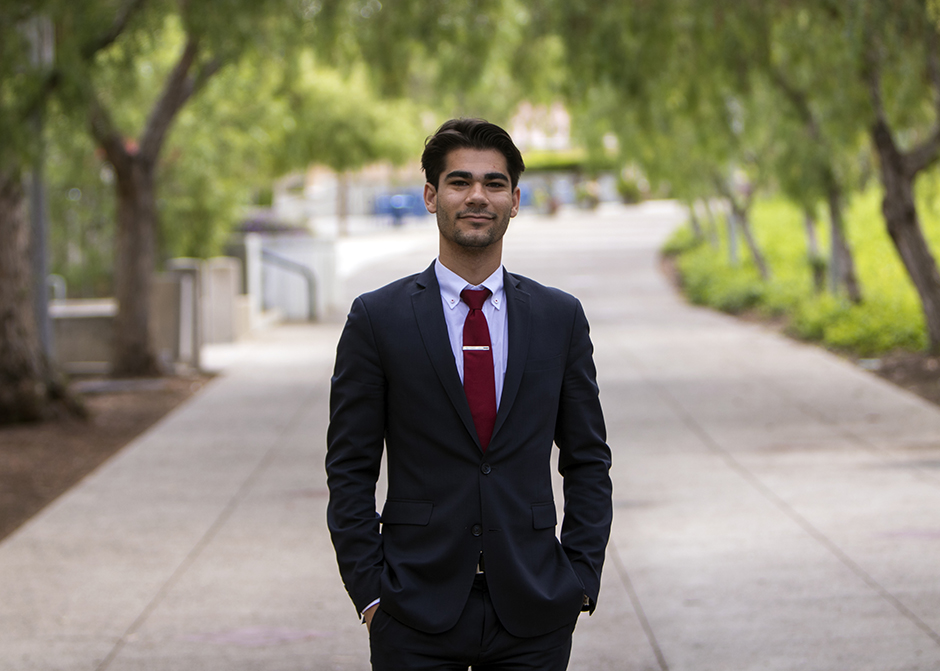 When an unexpected crisis hit, Alexander “Sasha” Yusuf found an Anteater lifeline at UCI that helped him realize his dream of a college education.

In January, when Alexander “Sasha” Yusuf applied to be one of two student speakers at the 2020 UCI social sciences commencement ceremonies, he had every intention of delivering his first-generation inspired message of hope and resilience in front of thousands of graduates, family members, and friends at the Bren Center. The sweeping changes brought on by the COVID-19 pandemic – including remote delivery of classes and commencement – have shifted his plans, but not his message or overall outlook. If anything, the new reality has made him even more grateful and optimistic about his future and his UCI community – one that has come together on multiple fronts to help him realize his dream of a college education.

“Being on lock down isn’t exactly how I envisioned my last quarter at UCI, but I’m finding comfort in knowing we’re all in this together and taking these measures for the greater good,” he says over the phone from his Irvine apartment. “It’s pretty amazing to see how the UCI and student community has come together to support each other through the toughest thing we will all collectively go through and to see the amount of resources and compassion we’re providing each other. Community has never been more important than it is now, and that shows when we take collective action for each other.”

Humble beginnings
Yusuf was born in Russia where he lived with his mom and extended family. His grandfather, a hardworking, simple man, grew up in the Soviet-era, a time when breadlines and hunger-panged nights were the norm, says Yusuf. The experience permeated Yusuf’s own childhood as he was taught early on to be thankful for what he had, which he admittedly says was not much.

“I learned to be thankful that there was food on the table,” he says. “I was always grateful for what I had and any opportunities I was given beyond that. I had a very low baseline for what life should be and wasn’t accustomed to nice things, electronics – things that are probably more normal for kids who grew up in America.”

When he moved to the U.S. as a young boy with his mom, they spent the first few months homeless in east Los Angeles. They soon found their footing, first through the help of a halfway house where they lived with two roommates, got two meals a day, and Yusuf got to attend school, and then through a more permanent move into subsidized housing.

“We were part of a big Russian community there and when I wasn’t in school, I was doing puzzles at home while my mom worked,” he says. “I had second-hand clothes, we had food on the table and a roof over our heads. I didn’t think about what we didn’t have or that we were living in hardship, I was just grateful for what we had.” Throughout his childhood, he and his mom would travel back to Russia in the summers and spend time with their extended family on the farm. Life as he knew it was good.

New adventures
When his mom got married, they relocated to Orange County where Yusuf grew more accustomed to creature comforts beyond basic needs. He excelled in the classroom and was part of his public school’s Gifted & Talented Education (GATE) Program. He applied and was accepted to UC Irvine - a top choice for the academically driven and economically minded high schooler – as a sociology major.

“I knew I wanted to be a lawyer,” he says, “so I was looking for a major that took a big picture view of how to create positive change in the world, and that’s sociology.”

The campus’s Mock Trial reputation was particularly enticing for the aspiring esquire. His first year in the program, he won several awards and made bonds with members who have become his closest friends.

But at the close of his freshman year, an unexpected crisis left Yusuf once again homeless and without financial assistance.

Seeing how the community and institution has been working together to find solutions during these tough times gives me hope that we can develop bigger solutions to broader issues.

An Anteater lifeline
“I couchsurfed with friends for awhile and was so thankful for the close knit group I knew through Mock Trial,” he says. His coach, Emily Shaw, helped connect him with Benjamin Shaver in the UCI Office of Financial Aid who proved to be a lifeline for Yusuf. “He helped me navigate the often confusing financial aid resources and support systems available to get grants and loans that allowed me to continue my education. Had it not been for Benajmin, I would likely have had to drop out of UCI.”

Shaver also helped Yusuf in his part-time job search, resulting in gigs with Gamestop and T-Mobile, complete with benefits, a 401K, and enough income to pay rent and tuition when coupled with his financial aid package.

“I feel so fortunate to have landed a job where, as a mobile expert, I get paid to talk to people,” he says, his enthusiasm and ability to see the bright side ever present.

A bright future
Instilled with his grandfather’s work ethic, he’s been able to juggle two jobs, full time school, and a Mock Trial schedule that requires a large time and energy commitment. And he’s not only managed the load, he’s excelled.

At 19 years old, he became T-Mobile’s youngest Winner’s Circle member, achieving sales that put him in the top 2% of the company.

Over his four-year Mock Trial career, he’s earned more than 10 outstanding attorney awards – two at the all-national level, a count that easily puts him in company with the organization’s most awarded West Coast members. In 2018, he helped bring the team to a third place finish in nationals. And this year, as team president, he led UCI to both a first place finish in the opening round of championships and receipt of the Spirit of American Mock Trial Association Award, honors that marked the group as the most winning AND most friendly, nice, and collegial as ranked by their peers. He was also named one of the top 16 competitors in the nation, earning an opportunity to compete at an elite Mock Trial-sponsored competition called “Trial by Combat.”

In the classroom, he’s gone beyond the required homework, projects, and exams to conduct three research studies, one with UCI political science professor Kristen Monroe focused on environmental ethics and empathy.

“For me, this project pointed to the very essence of engaging in social science and sociological action,” he says. “Issues like climate change aren’t limited to one area like government, science, politics, or economics. They span the entirety of humanity and social science gives such a good grounding for understanding and impacting these big issues on a global scale.”

The project spurred his interest in environmental justice, a topic he plans to pursue at Columbia Law School in the fall, despite hardships brought on by the pandemic and the likelihood his first semester will be delivered online. For him, it’s just another challenge to overcome, like the many he’s weathered to this point. And he’s grateful for the UCI community that’s stood by him through it all.

“Seeing how the community and institution has been working together to find solutions during these tough times gives me hope that we can develop bigger solutions to broader issues. And that gives me so much hope for the future. Together, we are stronger and we can accomplish a lot.”