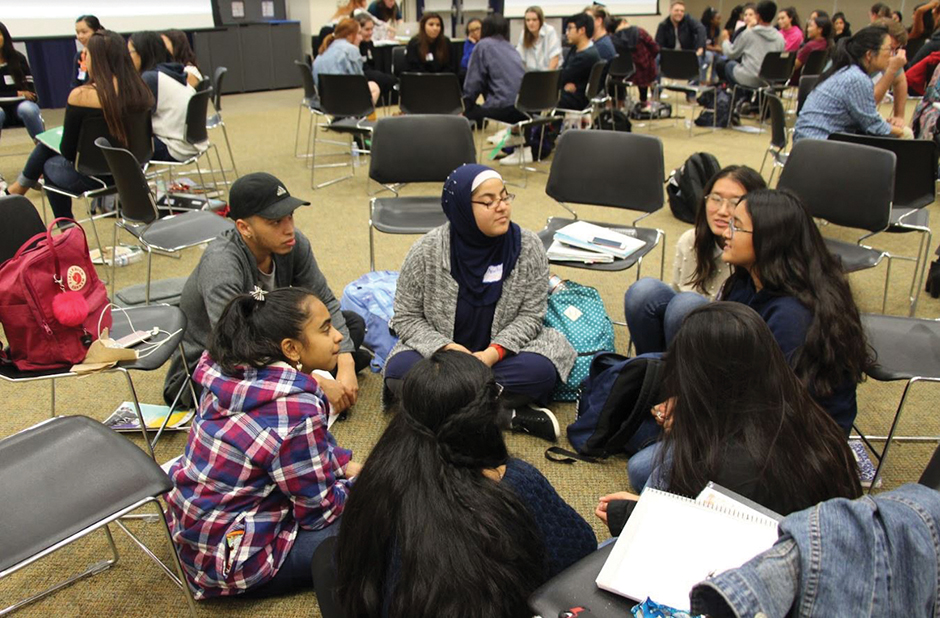 As news of race-based protests and violence in Charlottesville, Virginia, began to unfold in August 2017, the country watched in horror as another act of hate claimed the life of Heather Heyer. For Gerald Solomon, it was a tipping point. “I couldn’t just sit there as violence driven by racism yet again dominated the 24-hour news cycle,” he says. “I was frustrated and angry.” And as executive director of the Samueli Foundation, Solomon was in a unique position to channel those emotions into action. He picked up the phone and called his principals, Susan and Henry Samueli.

“I remember saying that we need to change the way people feel about each other, show people that every human has value - and that this can never, ever happen here,” he says. “The Samuelis said OK. And I knew where to start: with UC Irvine.” UCI is home to multiple programs aimed at promoting diversity and the understanding of different races, ethnicities, orientations, religions, and abilities. One in particular stood out as a model for Solomon. The campus’s Olive Tree Initiative had a 10-year track record of success in conflict analysis and resolution by promoting dialogue among people of divergent ideologies. With initial funding of $300,000 from the Samueli Foundation, the OTI-based Diversity, Inclusion & Racial Healing Ambassador Program launched in spring 2018.

“It seeks to reduce stereotypes through academic preparation, experiential learning, and leadership development,” says UCI’s Daniel Wehrenfennig, executive director of OTI and co-director of DIRHA. “Our goal is to build empathy, cultural competency, and leadership skills among high school participants so that they can pass on their knowledge to their peers.” The two-year program began with Orange County’s El Modena, Capistrano Valley, Fountain Valley, Garden Grove, and Westminster high schools. Joining them in fall 2018 were Brea Olinda, Santa Ana, Cypress, Magnolia, Savanna, Dana Hills, San Juan Hills, and Woodbridge. A fall 2019 waitlist is available for additional schools, with interest expressed by Newport Harbor, Aliso Niguel, and John F. Kennedy high schools as well as Oxford Academy.

It’s incredible to witness what DIRHA is doing for student participants and its potential for changing entire high schools and communities.
-Teresa Neighbors

Students involved with DIRHA attend UCI faculty- and staff-led seminars focused on making complicated topics - such as race, gender, and religion - digestible, thought-provoking, and age-appropriate. They work with UCI faculty and program mentors to develop a school project around one of those subjects and then share and discuss them at a reception for all member schools. Projects showcased by the inaugural cohort in December included a video created by Capistrano Valley students educating their peers on immigration’s deep roots in American history. The Garden Grove High School group organized a lunchtime talk series at which students could freely discuss issues of race, culture, and identity and confront stereotypes with the help of local leaders knowledgeable in these areas.

“It’s incredible to witness what DIRHA is doing for student participants and its potential for changing entire high schools and communities,” says co-director Teresa Neighbors, a UCI lecturer. Via the program, the five pilot schools alone are estimated to have reached more than 12,000 students with messages of inclusion and inspiration. Students’ follow-up surveys of their classmates revealed increased awareness of diversity and inclusion issues, renewed self-confidence in individual identities, and a sense of empowerment to effect change.

“At Garden Grove High School, the DIRHA program has raised empathy among different groups of students and taught us that even if we are different, we can find strength in working together and celebrating the common thread of humanity in every one of our campus groups,” says Sara Martinez, English teacher and DIRHA coordinator at the school. Just one year after its launch, the program is active in 13 Orange County high schools and plans to expand into the Los Angeles Unified School District. And another $100,000 in grants have come in from the California Wellness Foundation, the Orange County Community Foundation, and the Jewish Federation’s Rose Project.

The success of the program has sparked hope in Solomon and the Samuelis that change can happen. “Youth have significant influence within and beyond their peer groups,” Solomon says. “By showing them how to counter actions and messages that perpetuate hate, we can alter belief systems that will last through adulthood. It’s truly remarkable to watch students make such a difference at the local level that can, ultimately, change the world.”