a career helping OTHERS

Psychology alumna, author, and radio show host Jennifer Hill ’02 has made a career out of finding others their dream jobs 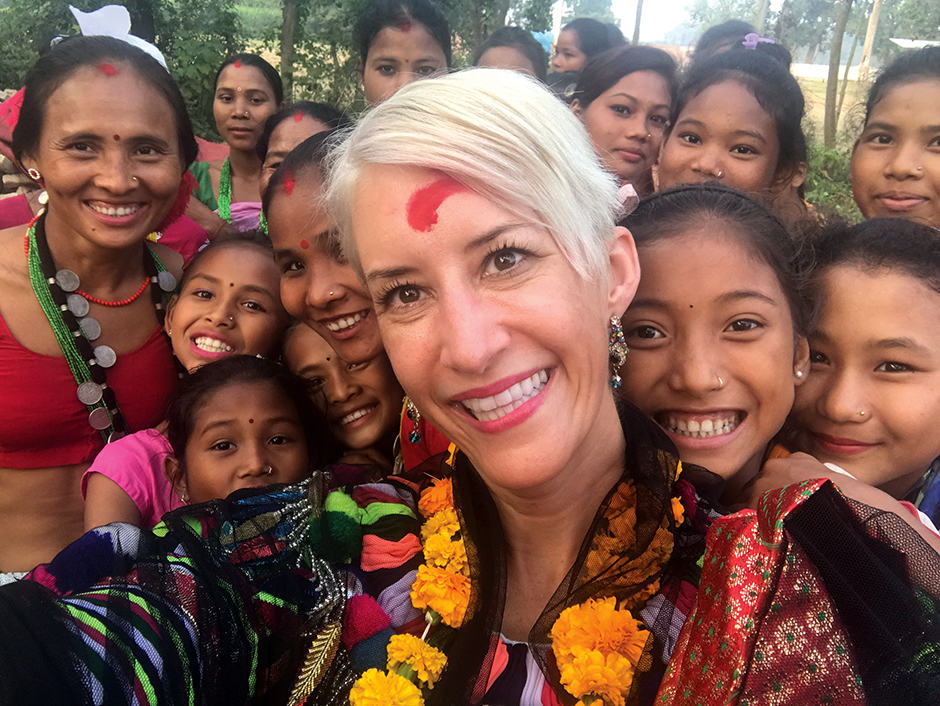 In fall 2017, Jennifer Hill and her family helped build a school in Nepal through the group BuildOn.

Jennifer Hill, psychology ‘02, is an expert at her job. Come to think of it, she’s probably an expert at your job, too. Hill is the founder of JHill’s Staffing Services, a Division of Marcum Search LLC, a recruiting firm that prides itself on expertly matching job seekers with open positions in top companies. As a longtime recruiter, she has made it her life’s work to not only find the top candidates for a company’s open roles, but to also coach job seekers through the entire interview process. So she really does need to know the job, the company, and the person inside and out. It was a business she found her way into unexpectedly, following an unplanned delay in her graduation from UCI. And it all turned out to be a happy accident in the end.

Now, Hill runs a thriving business, hosts a weekly radio show titled “Get Yourself the Job” to assist those searching for new employment, has written a book, and spends what little free time she has left giving back, including as a member of the School of Social Sciences Dean’s Leadership Society. She also recently traveled to Nepal where she and her family helped build a school. Her story is proof that careers are full of unexpected twists and turns, but she’s become an expert at navigating them for herself and others - and it’s evident that her dream job lies in helping others find theirs. Hill has always been one to look ahead, plan, and actively pursue what she wants. (“That drive came from my grandpa - he always told me I could do or be whatever I wanted.”) But all her careful career planning went awry following her final semester at UCI. Through an unfortunate error, she was missing a prerequisite that she needed in order to graduate.

“At the time I was so upset,” she says. “It felt like everything was just kind of ruined. But as frustrated as I was in that moment, it turned out to be the best thing that ever happened to me.” That delay in her official graduation meant she had to place law school (her original plan) on hold. But it also meant she had some time to scour job boards for an interim position. And that’s when she discovered the world of professional recruiting.

“I got in at a company that wasn’t a great fit, however while working there I actually came across a job I was supposed to fill. But instead I reached out to the president of the company and told him he was going to hire me and I would be the best thing that ever happened to the company,” Hill says. Her gumption grabbed the executive’s attention - she got the job, and she was quick to prove she didn’t oversell herself. She was breaking sales records left and right at the tender age of 22, but the market crash in 2007 meant a lot of the people she had placed in seemingly secure jobs were being let go, something she took very personally.

“I couldn’t sleep at night because I was so guilt-ridden,” she says. “I felt like I had made all this money on finding people these jobs and now they were the ones getting laid off.” So instead of sitting around, she wanted to do something about it. Hill approached her boss with the idea of a new division that would provide training and resources to people to help them get back to work. They loved the idea, but weren’t in a place to pursue it. So Hill decided to open her own consulting firm specializing in just that. She ran the firm briefly, then was offered an opportunity to work for a former competitor’s startup firm. She took the gig and put her own company on hold, but not even two months in, she decided she couldn’t handle the money hungry atmosphere. She wanted to be in charge of a company that cared about the people they were finding jobs for more than the money. So she decided to go back to working for herself, and JHill’s Staffing Services was officially born. More than eight years later, the firm continues to set itself apart from the competition by the quality of care they offer their job seekers.

I want to make sure as many human beings as possible get access to a great education wherever they are in the world.

“My rule of thumb is I will never recruit for a company that I wouldn’t go to work for myself,” Hill says. “Every single person that comes through our doors gets complimentary career coaching. So even if we didn’t have the perfect job when you came in, we would still coach you and give you feedback and interview tips. And so often we’ve had people we didn’t personally place who will thank us for the difference we made for them. I love that I get to help people find their dream jobs. And aside from being maybe a doctor, there are so few jobs where you get to make that kind of impact in people’s lives.” But Hill isn’t just impacting people’s lives through her day job. Since getting involved in self-development about a decade ago, she has made a conscious effort to give back as much as she possibly can. Her philanthropic efforts include mentoring youth from LA and OC through SOS Mentor (Shaping Our Students), helping to organize a women’s support and sisterhood group called Gratitude Girls in Los Angeles, and traveling to Nepal where she and her family helped build a school through the group BuildOn.

“I had read a book called Half the Sky by Nicholas Kristof and Sheryl WuDunn that was all about the struggles women face around the world every day, particularly sex slavery. It really affected me, and one thing the authors talk about is how one of the quickest solutions to these issues is education,” Hill says. “So every year for my birthday I throw a party fundraiser benefiting a specific cause, and in 2017 I decided I wanted to raise funds to build a school in Nepal.” Hill hopes to continue building schools around the world, but she is sure to focus on education closer to home as well. In fact, her involvement with the Dean’s Leadership Society in social sciences is one of the most recent projects she felt the need to take on.

“The moment I met dean Maurer I was immediately drawn to his energy. And when I got to know a little bit about his vision for the school I knew this was a leader I could get behind,” Hill says. “I’m happy to see that the School of Social Sciences is in such good hands and I hope to help pay it forward in a way that lets future generations benefit from the same opportunities I was afforded.” In particular, she is happy to see Maurer advocating for the school to get the accolades it deserves and striving for a diverse student population. And it really all ties into the work she does in her recruiting firm. Hill knows the tools that will help individuals thrive in the job market, and a quality education is one of the greatest assets toward building a lasting and rewarding career.

“For me education is paramount for everyone,” she says. “I want to make sure as many human beings as possible get access to a great education wherever they are in the world.” And with Anteaters like Hill helping to guide us, we’re all in excellent hands.