Business economics senior Crystal Ho had life-changing experiences at UCI and in D.C. 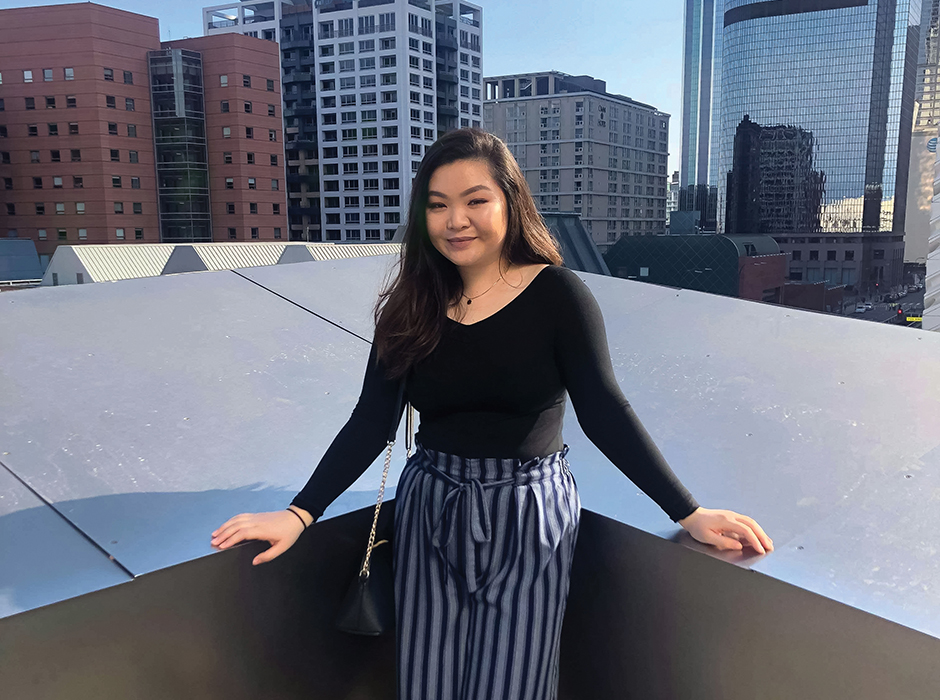 UCI smoothed the way for Crystal Ho and other Pell Grant recipients like her to participate in the UCDC program by offering a $1,000 need-based scholarship.

As a little girl, Crystal Ho envisioned herself as a businesswoman, wearing a white pantsuit, exuding power and success. But while that vision of success inspired her to work hard in school, there was also a fear pushing her forward. As a first-generation college student and the daughter of Vietnamese and Chinese immigrants, Ho felt a constant pressure to prove to her parents that their sacrifices were worth it.

“I joke to my mom that I’m her sole investment,” laughs Ho, who is an only child. “But I really felt like I needed to compensate for her sacrifices, and I think a lot of us feel like we owe our families something.”

She chose UCI because of its proximity to her family in Los Angeles County, and because of the business economics major offered by the School of Social Sciences. “Business economics struck the perfect balance between following my own passions but also being practical about gaining skills that would lead to a well-paid job,” she says.

Determined to wring every experience out of her four years of college before entering the working world, Ho arrived at UCI with a bucket list, which included studying abroad. She checked that off her second year by spending a quarter in Hong Kong. But Ho kept herself open to all kinds of opportunities, and it was those unexpected experiences that proved the most transformational.

“When I came to UCI, I didn’t expect to be doing research, learning how to code, or interning in Washington, D.C.,” she says. Ho became more interested in politics after the 2016 election - when a woman in a white pantsuit narrowly lost the presidency.

“Being an Asian American woman with limited resources - except for my education - I realized I am a political statement myself,” she says. Ho decided to head to the capital as part of the UCDC program - a UC-wide program in Washington, D.C., where students from each campus take classes, do internships, and experience life inside the Beltway.

“There’s something transcendent about staying in our nation’s capital to live, work, and engage the heart of American democracy,” said Matthew Beckmann, associate professor of political science and faculty director of UCI’s capital internship program.

To earn a spot in the program, Ho needed to first secure an internship in D.C. Fortunately, her hometown Congressional representative is Judy Chu (CA-27), the first Chinese American woman elected to U.S. Congress, and Chu’s office jumped at the opportunity to hire their constituent. 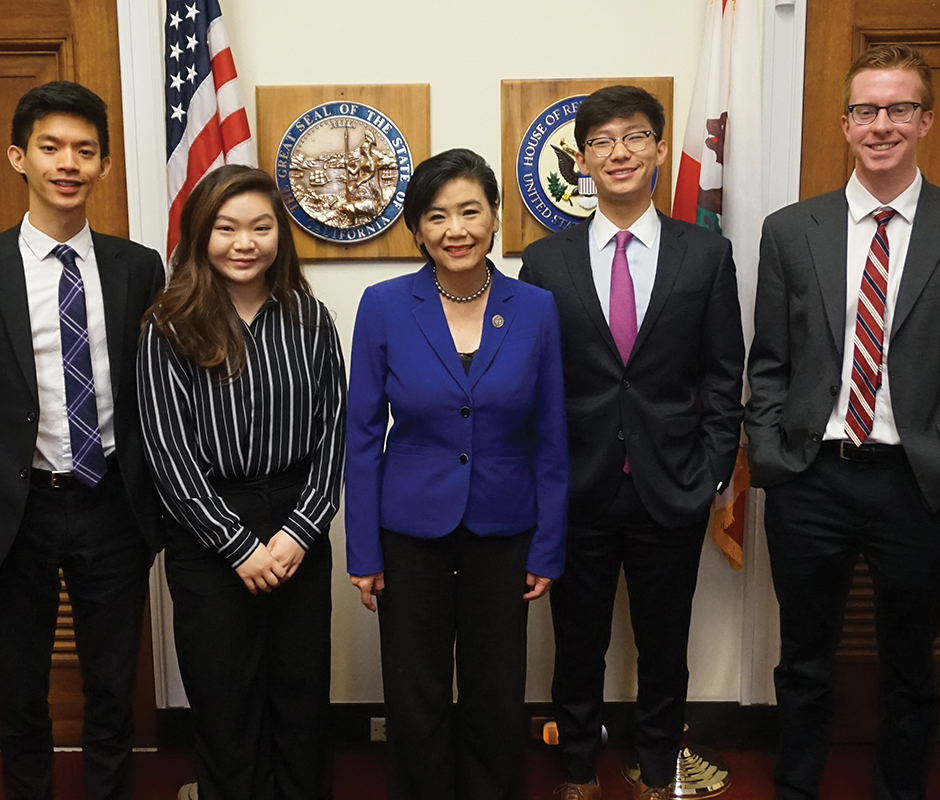 “As a first-generation, low-income, Asian-American, female college student, I was empowered by UCI to explore all the possibilities...sometimes even beyond the scope of what I thought I could achieve.”

“One of the things that makes UCI so special is that we don’t just teach students about notions of civic duty and public service; our curriculum provides opportunities for students to put those ideas into practice,” says Bill Maurer, dean of the School of Social Sciences, which helps fund the need-based scholarship program. The benefits of the UCDC program extend beyond students to the capital itself. Research from the Joint Center for Political and Economic Studies found that Congressional employees, for example, often lack diversity, even in offices that represent ethnically diverse districts.

“By building a pipeline from the nation’s greatest public university system into the nation’s capital, the University of California has allowed students to gain the experiences, hone the expertise, and build the networks that will allow them to overcome historical barriers that have stood too tall, too long,” says Beckmann. For Ho, the UCDC experience included meeting with the Asian & Pacific Islander Caucus, reading and summarizing dozens of news clips each day to keep the congresswoman and her staff abreast of emerging issues on the Hill and back home, and working long hours - usually sipping Soylent at her desk for lunch.

There were moments of Washington glamour, too. Ho helped plan the book release party for a U.S. Congress publication that celebrated the history of Asian Americans in Congress from 1900 to 2017. Ho and her colleagues from the congresswoman’s office were guests at the Asian Pacific American Institute for Congressional Studies annual gala - a glitzy affair for up to 1,000 people, with tickets going for $500 per person.

“It felt surreal, to be running around the Capitol of the U.S. - literally the Capitol,” says Ho.

Ho says her experience in Washington, D.C., changed her life, and as she begins her post-college job hunt, her internship on Capitol Hill is one of the crown jewels of her resume. “My advice to other students, regardless of major, is that if you can take a chance on going to UCDC, go,” she says. UCDC wasn’t the only program that shaped Ho’s college experience in unexpected ways. Her freshman year, she participated in the School of Social Sciences’ research-focused Summer Academic Enrichment Program for first-gen students. Through that program, she began a research project on women of color in entrepreneurship, a topic that has continued to interest her throughout her career at UCI. So much so, that she added a minor in innovation and entrepreneurship from The Paul Merage School of Business, and recently gave a business pitch at the UCI New Venture Competition.

“I’m trying to educate myself so that one day down the road, I can do something that could help other women start businesses and create a pathway for their own independence,” Ho explains. In her final year at UCI, Ho seized another unexpected opportunity: she learned coding. In an economics class taught by Brian Jenkins, assistant teaching professor of economics, Ho harnessed the Python coding language to create graphs to visually represent economic data.

“This is a game-changer for me,” says Ho. “Without it, I would be stuck with economic theory in my notebooks.” Instead, she can create infographics and models that help people see and understand complex economic information. She expects this skillset will be critical in helping her land a job as a business analyst or economics researcher when she graduates, either home in Los Angeles or back in D.C.

Ho knows that the June commencement ceremony will be emotional for her whole family. Not only because graduating from college proves that she did not waste her parents’ sacrifices, but also because she is that much closer to realizing her dream of becoming a businesswoman sporting a power suit.

“As a first-generation, low-income, Asian-American, female college student, I was empowered by UCI to explore all the possibilities,” she says. “Sometimes even beyond the scope of what I thought I could achieve.”

Her advice for other first-gen college students following in her footsteps? “Maximize your time here. Optimize your opportunities here. Extract as much as you can from it.” But then she pauses. “And breathe. Just breathe.”