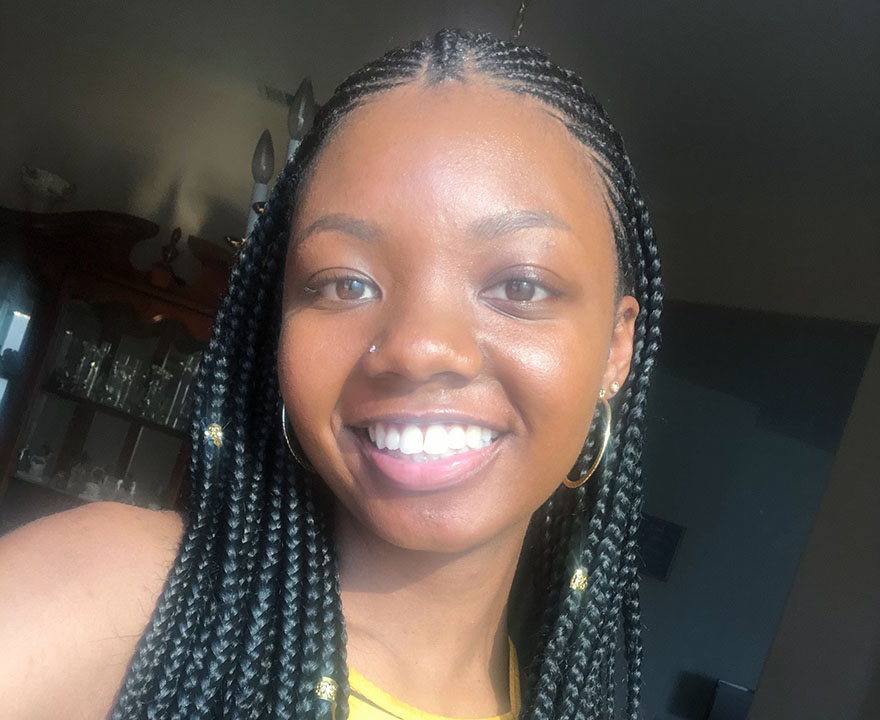 
“I want to break barriers and transcend spaces where Black people aren’t usually represented, so that others can follow,” says Kayla Atkinson, a double major in psychology and sociology at UCI.

This year, Atkinson is getting a taste of what it might be like to work as a mental health professional by working for the Pathfinder Peer Educator Program through UCI’s Student Outreach and Retention Center.

“Overall, I hope I’m helping to make their college experience better,” she says.

The objective of the Pathfinder program is to support students’ overall wellbeing and to continue to improve undergraduate retention rates at UCI. Many of the students Atkinson advises are first-year (both freshman and transfer) students who are first-generation, low-income, and historically underrepresented.

“Many of the students are just like me. It feels good knowing I helped someone going through a similar experience,” she says.

Atkinson’s mentor, associate dean of undergraduate studies and professor of teaching Jeanett Castellanos, says that Atkinson is invested in others and finds ways to have a positive impact. This year, Castellanos invited Atkinson to be a course assistant in her lab, a role that is extended to only two students per year.

“Other students look up to Kayla for her leadership and connect with her given her strong emotional intelligence,” says Castellanos.

Atkinson’s student outreach efforts extend beyond campus. This past summer, she mentored at-risk youth through discussions and weekly seminars in her hometown of Lancaster, CA.

“It was really rewarding to connect with other youth and see the impact one could have. Plus, I got a good sense of what I hope to do in the future,” she says.

In addition to serving as a peer educator and volunteering in her hometown, Atkinson is being trained as a peer life coach for UCI’s Counseling Center, where she looks forward to working with students one-on-one. In this role, she is supervised by a licensed counseling psychologist who meets weekly with the students to discuss the ways to best coach students in need.

The impact of actions

Growing up, Atkinson’s parents stressed the importance of a college education and allowed her to strive for her “wildest dreams.”

“A lot of the reason why I’m motivated to help others was instilled in me by my parents,” she says. “They don’t have much, but they’ve always been extremely giving, determined, and compassionate. I’ve seen the impact their actions have had, and I want to embody their qualities.”

Castellanos echoes the impact Atkinson’s upbringing and environment had in shaping her community-oriented goals.

“Growing up in a low-income Black community, she speaks about the inequities she experienced, the oppressive systems in place that could be addressed to improve BIPOC experiences, and the value of mental health services to enhance the communities’ advancement and well-being,” Castellanos says.

When Atkinson helps her fellow students find a foothold, she speaks from experience. When she first arrived on campus as a freshman, she admits to feeling adrift.

“I initially felt isolated and experienced imposter syndrome as a first-gen student. Plus, the Black population is low. I found it hard finding a community,” she says.

Atkinson was in her freshman year when the pandemic hit. She felt she was finally getting into a college groove when all students were sent home. While she was grateful that she had a loving home to return to and had parents who had stable work during those times, she found it difficult to cope with the isolation.

“This was during the height of the George Floyd protests and I felt a lot of anger, sadness, and not knowing what to do,” she explains. “That moment, that year, reinforced my goal to go into mental health and help my community.”

The transition back to campus, after more than a year of remote learning, came with a few bumps. Like many students, Atkinson had to, once again, adapt to a new environment.

“It sort of felt like being a freshman again,” she says.

But the self-proclaimed introvert forced herself to put herself out there.

“I realized I had to learn to be comfortable with being uncomfortable,” she says.

She reminded herself that other students were likely going through similar things, and in true psychology major fashion, assigned herself weekly social tasks. She challenged herself to go to one event or reach out to one new friend a week. Atkinson soon found her stride and in her final year at UCI has built a supportive community, while maintaining a nearly perfect GPA.

Atkinson is someone who has truly made the most of her college experience.

“In a time where universities strive to shape top students, Kayla is a model undergraduate who demonstrates academic excellence at all levels,” says Castellanos.

Despite all her success, Atkinson would be the last person to advise others to follow her path.

“Have your own journey. Your experiences are valid. Do it for yourself,” she says, but then interrupts herself to offer another piece of advice, “Don’t be afraid to lean on others and reach out to your community. There is power in relying on people. It brings you closer.”

She can already see the light

Atkinson will graduate this spring. She already realizes that the stresses of classes will fade, and it will be the good times that will linger.

“I'm thankful for the personal and professional growth that I received at UCI, as well as the amazing people I've met,” she says.

She is currently applying to master’s programs in clinical counseling and plans to work with young people in marginalized communities after she obtains her graduate degree. She could see herself working at a school or for a non-profit organization helping her community thrive.

“It is exciting to watch her pursue her dreams while knowing there is so much promise ahead,” says Castellanos.

One of Atkinson’s favorite quotes is There’s a light at the end of the tunnel. They are words that give her hope, especially now, when she can already see the light. “I’m so excited because I know what I want to do, and I’m really inspired to get there,” she says.