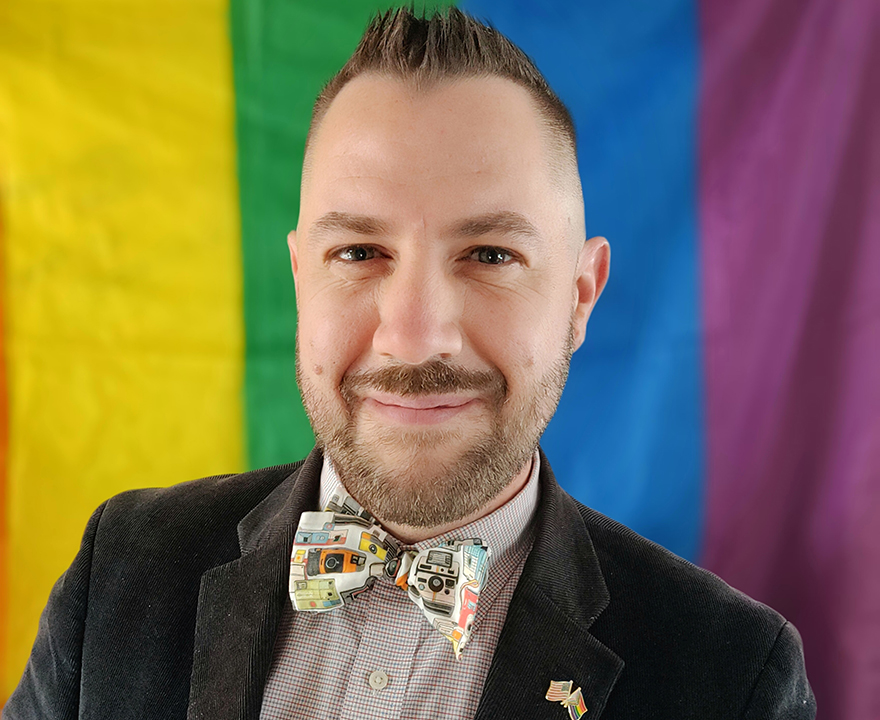 
You can call Christopher Marcum, Ph.D. ’11 a policy wonk. The shoe fits.

As assistant director for open science and data policy in the White House Office of Science and Technology Policy, Marcum strives to make research findings more widely accessible, and restore trust in science. That’s no small challenge. According to Pew Research, Americans’ trust in scientists and medical researchers declined during the pandemic, and today only 29% of Americans hold a “great deal of confidence” in them.

Marcum’s propensity for policymaking emerged even as a graduate student at UCI, where he won the UCI Order of Merit Graduate Service Award for helping to create a fully funded, single-payer health insurance plan for University of California graduate students – the nation’s first.

“That was my first real deep dive into policy work, and how it’s possible to change people’s lives with deliberative, evidence-based policy making,” Marcum says.

His policy chops, combined with the research experience he gained as a Ph.D. student at one of the nation’s top-ten public university sociology departments, has propelled Marcum’s career from the think tank RAND Corp, to two branches of the National Institutes of Health, and now to the White House.

Marcum wanted to be a sociologist from an unusually young age. Raised in rural Errol, New Hampshire, a town of just 300 people, Marcum traveled across state lines to attend high school in Maine. There, he took a class on social problems and read Down on Their Luck, co-authored by David Snow, UCI Distinguished Professor emeritus of sociology. “Something clicked,” he says, and his diverse interests – physical science, statistics, social problems – found cohesion.

Marcum studied sociology at the University of Arizona, where Snow was on faculty at the time, and not far from where his grandparents had moved for retirement. Marcum’s application to UCI’s graduate program in sociology was heavily influenced by the time he spent with his grandparents, and questions about the looming shifts in family structures and retirement systems as the wave of Baby Boomers was poised to retire.

Marcum’s application was “very clever but somewhat quirky,” remembers Carter Butts, Chancellor’s Professor of sociology, who was one of two faculty who argued for admitting Marcum, and would become one of Marcum’s most influential mentors at UCI.

In his second year of graduate school, Marcum opted to earn a master of demographic and social analysis, which allowed him to explore his questions about mortality and demographic shifts. He researched Americans’ shifting attitudes about euthanasia and “compassionate death” as lifespans stretched longer.

Then, Butts invited Marcum to join his Networks, Computation and Social Dynamics Lab, where he thrived, engaging with a wide range of subjects – coding, research methods and relational models.

“One of Chris' strengths is his flexibility and reach,” says Butts. “If you look at his work, he has taken on problems ranging from isolation among the elderly and understanding how families grapple with heritable genetic illness to modeling food choice and interactions among birds. He never stops learning, never stops trying new things, and isn't afraid to bridge into new areas. I think this helps make him effective in both science and policy, and it will continue to serve him well in the years to come.”

While plenty of Marcum’s doctoral cohort followed a traditional path to academia, nearly as many went into government or industry, including at the U.S. Census Bureau and private research firms. He stays in touch with them, celebrating their professional successes and personal milestones.

“Sociologists play a very active role in researching and helping to guide policy implementation throughout the United States — from economic policy to security, labor, technology and health, you will find sociologists in government, industry and the non-profit sector working to support evidence-based policies that aid the public,” says Butts. “Chris' trajectory is a great example of that.

“His expertise in social network analysis, demography and statistics gives him the ability to engage with tough, real-world problems in a rigorous, evidence-based way, and to understand both how science can improve policy and — just as importantly — the limits of what we can and can't know,” Butts adds.

At RAND Corp, Marcum researched influenza vaccination behavior, with an eye toward improving vaccination policy. He was then recruited to the National Human Genome Research Institute to work with Laura Koehly in the intramural Social Network Methods Section, where he won the National Institute of Health’s Matilda White Riley Early Stage Investigator Award for research using network methodology to explain how intergenerational knowledge is shared within families. At NHGRI, he was drawn toward institutional science and research policy, which led him to a more policy-focused position at NIAID in 2020.

In the early months of the COVID-19 pandemic, Marcum helped establish data policy and practices for researchers to share urgently needed coronavirus research data. While at NIH, Marcum was invited to participate in the president’s Scientific Integrity Task Force, which led to him being offered a position as assistant director of the Open Science and Data Policy team in the White House’s Office of Science and Technology Policy (OSTP).

OSTP coordinates with every major federal department and agency, from health and human services to commerce – wherever federal dollars are being spent on research or science and technology. Marcum says he feels privileged to work alongside senior advisors, top-tier researchers, policy fellows and interns across government institutions, but that the day-to-day is far from glamorous.

“From the outside, it might seem like the White House is full of famous public figures, but they’re just normal people who are kind and very dedicated,” Marcum says.

Marcum’s major projects since joining OSTP include helping to develop the policy that would make nearly all federally funded research publicly available, including in biomedicine and social sciences, and then communicating those policies far and wide. While Marcum has always believed in making research publicly accessible, the current efforts are even more poignant because his sister is fighting cancer.

“One of the many reasons I value making research publicly available is because I often wonder how many cures are locked behind closed doors, where someone just didn’t have access to the data or the research that would have helped them,” says Marcum. “Especially with cancer, there’s such rapid development in the research space.”

These are sentiments President Joe Biden himself has echoed in speeches about scientific policy.

“When I led the Cancer Moonshot as vice president, one of the biggest issues I talked about was how federally funded cancer researchers were not sharing their results with their peers or the public,” Biden said in September. “And today … we’re making sure that transparency applies to all federally funded science beyond just cancer.”

As Marcum continues his policy work with the White House, he also thinks about the future. He says he enjoys mentoring interns and rising professionals, just as he mentored newer graduate students at UCI, and was himself mentored by Butts.

“I want to do something that gets into the practical aspects of data sharing and research sharing, and trying to change the culture of science to be more collaborative, equitable and accessible for people who want to engage – in whatever capacity they want. And I want to mentor people who will carry that on that spark.”

But for now, his attention is laser-focused on creating the best possible policies for scientific research, and restoring trust in our nation’s scientific institutions.

“I firmly believe in the scientific mission of the federal government,” he says. “It’s the most productive publicly funded science enterprise in the world, and I can’t believe I have the honor of getting to work in this capacity.”

Disclaimer: Christopher Marcum was interviewed in his personal capacity as an alumnus of UC Irvine. The views expressed in this story do not necessarily represent the Biden-Harris Administration, The White House or the White House Office of Science and Technology Policy.