Service in the spotlight 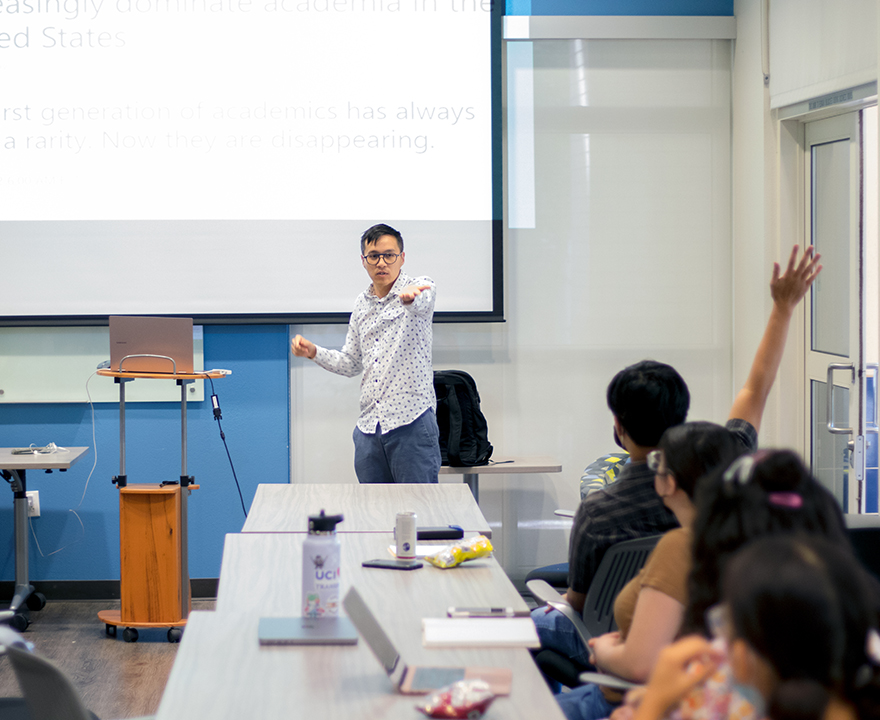 Service in the spotlight


Long Bui's path to the professoriate has been anything but smooth. From an abusive, financially unstable childhood spent in precarious housing to an undergraduate experience punctuated by parental abandonment, he’s faced many struggles. But the UCI global and international studies associate professor doesn’t shy away from sharing them - quite the opposite, in fact.

“I’m very open about what I’ve been through because I want others to see in me what’s possible to overcome,” he says.

His candid style resonates with his students and mentees, many of whom - like him - are from underrepresented groups and among the first in their families to go to college. Since arriving on campus as a member of the faculty in 2018, Bui has become an active advocate and advisor for a number of student and faculty programs working to advance diversity and inclusion. For his efforts, he’s been recognized as the 2022-23 recipient of the Academic Senate Distinguished Mid-Career Faculty Award for Service, an honor that highlights the less seen but critical service work faculty perform as mentors, program directors and committee leaders.

“Professor Long Bui has an extraordinary record of service within the social sciences, across the UCI campus, and within the larger OC community,” says Eve Darian-Smith, global and international studies professor and chair. “All his service work pursues avenues that foster the growth of UCI as an engine of mobility for non-traditional student populations.”

His long list of activities includes serving as a DECADE mentor for graduate students and as faculty director of UCI’s Truth and Racial Healing Transformation Center. The anti-racist work of the center includes advisory duties for the Diversity, Inclusion, & Racial Healing Ambassador (DIRHA) program, a partnership with local high schools that helps students examine and overcome often-unconscious beliefs created by racism, and the Deconstructing Diversity Initiative (DDI) that trains UCI students to practice diversity in their communities. He’s also a campus director of the First Gen, First Quarter Challenge which helps first-gen faculty and students connect and succeed at the university.

He's the faculty director – and alumnus - of the School of Social Sciences Summer Academic Enrichment Program (SAEP), a five-week intensive program that equips first-gen undergrads with graduate-level research skills. He serves on the committee for LIFTED, a degree program that’s establishing a pipeline for formerly incarcerated students to transfer to UCI, and he previously served as faculty advisor to the Prison Education Project in which UCI students are trained to tutor and teach individuals who are incarcerated. He is also a certified part of Vet Ally, a program designed to build safe spaces for veteran students. And he serves on the Academic Senate’s Council on Educational Policy where he takes pride in representing students of color and first-gen students.

Beyond the campus, he’s an editor for the Vietnamese American Arts and Letters Association through which he helps bring attention to the local Vietnamese community, connecting the work done in this.

All of this he does while teaching diverse courses and pursuing meaningful research.

“Professor Long Bui has demonstrated an unflappable commitment to undergraduate studies and mentoring by providing time, effort, and creative support in his multiple leadership roles,” says Jeanett Castellanos, social sciences associate dean of undergraduate studies and professor of teaching. “A role model and mentor invested in academic success and community advancement for all first-gen students, he actively seeks opportunities to work directly with students, helps them prepare for graduate school and beyond, and creates an academic community promoting scholarship and academic excellence. He's invested in student success and goes the extra mile to support a learning environment that promotes the development of a scholar identity for our students.”

It’s an exhausting schedule, Bui acknowledges, but he approaches it like a mission, guided by an understanding that for some – like him - these programs can be lifelines.

“I have faced every obstacle. Based on who I am, I shouldn’t be where I am today. My parents had only a primary school education and we always struggled financially,” he says. “I know the importance of being in the spaces I am so students of color, students who don’t have anyone or anything else, see that they have an ally.”

For Bui, academic mentorship provided a sense of belonging and direction that was lacking. When his abusive father abandoned the family, Bui and his mom and three siblings moved often in search of housing and work to make ends meets. They wound up living in rented garage space with no access to indoor plumbing. By the time he graduated, Bui had attended 16 different schools. At UC Irvine, he found refuge.

“I didn’t have much support at home, but my teachers believed in me, often seeing possibilities in me that I hadn’t yet seen myself,” he says. “Despite the chaotic journey, school provided me stability when I desperately needed it.”

When he was accepted to UCI, he seized the opportunity to create a future far different from his past. He juggled dual majors in political science and Asian American studies while taking honors courses. He connected with social sciences professors Caesar Sereseres and Jeanett Castellanos who opened his eyes to research and a future in academia through SAEP, which he now directs.

But while his classmates were making plans to hang out and be “typical college kids,” Bui was dealing with a different reality. In his first year, his mom disappeared, leaving Bui and his siblings to fend for themselves. While studying for exams through undergrad and into his doctoral program at UC San Diego, Bui experienced housing and economic insecurity.

But he persevered and worked to finetune his research agenda that’s motivated by questions of identity, why people suffer structural violence and how they overcome it.

“I want people to come away from my work with a different understanding of communities and populations,” he says. “We tend to lump people into groups, but I want to show how complicated these groups are.”

When he completed his Ph.D. in ethnic studies, he hit the job market for seven years with “no less than 420 applications” for employment before landing a tenure-track job. He struggled with not fitting into academia, based on “who I was and where I came from,” he says. He landed a teaching role at Vassar College, a Chancellor’s Research Associate Fellowship at the University of Illinois Urban-Champaign, and a University of California President’s Postdoctoral Fellowship at UC Riverside that paved the way for his return to UCI in 2018 as a professor in the newly launched Department of Global and International Studies.

“I think it’s important that we don’t sugarcoat our struggles to get started,” he says. “I’ve been through the ringer, I came out on the other side, and my goal is to pull people through that pinhole of opportunity.”

Since his arrival on campus, he’s authored over a dozen essays and two books, Returns of War: South Vietnam and Price of Refugee Memory (2018), and Model Machines: A History of the Asian as Automaton (2022). And in addition to his many service activities, he teaches undergraduate courses on gender, sexuality, race and ethnicity where his direct style is a hit with students.

“I work to ensure that my students learn their degree is only a first step in building a new future,” he says. “We need to recognize that our world is falling apart and it’s up to us as social scientists to build a new and better one. We can’t rely on old tools; we need to write own scripts.”

As he reflects on his career thus far in education, Bui feels a strong sense of pride in what he’s helped to build. At the same time, he knows his work is far from over.

“I was lucky to find amazing mentors who believe as I do – that you only see yourself through the reflection of the community you build,” he says. “So I’ll keep paying it forward to create positive change in our world.”