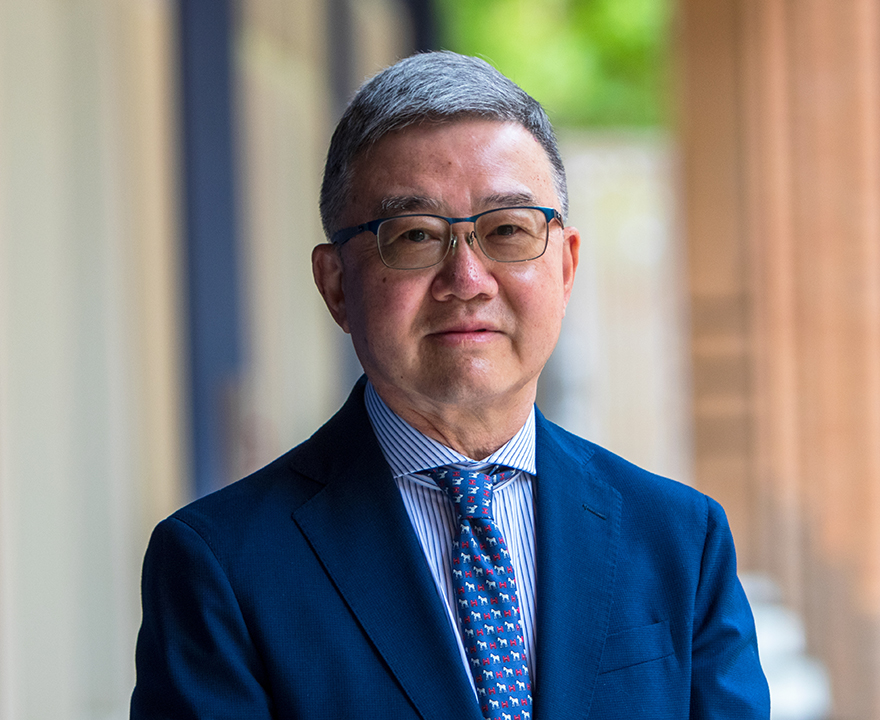 
UCI sociologist Wang Feng has approached his research specialty in population science with precision and purpose.

For nearly four decades, he’s employed a variety of methodologies from surveys to statistical data analysis to study global population shifts and policies. He’s penned more than 100 articles and 11 books that explore China’s history, society, rising inequality, family trends, and more. He’s served as an expert for the United Nations, the World Bank, and the World Economic Forum. Most notably, his academic research and public advocacy played an instrumental role in overturning China’s harmful decades-old one-child per couple policy.

“A prolific and internationally renowned scholar in both English and Chinese, Wang Feng belongs to the rare group of professors who are ‘distinguished’ in the truest sense of the word,” says David John Frank, UCI sociology chair and professor. “He’s stepped beyond the Ivory Tower, not only becoming a giant among academics but also becoming a giant in the real world of policy and human welfare.”

In May, the university recognized Wang Feng’s achievements with the Alumni Association Lauds & Laurels Award for Faculty Achievement. For the humble academic-turned-advocate, the honor is a gratifying acknowledgement that he’d gladly share with admired campus colleagues and international researchers who took risks with him to help create change – something he sees among his duties as a demographer.

“We have so many people who are doing such important work; I don’t feel that mine is any more worthy than theirs,” says Wang Feng. “I see myself as a scholar with a social conscience and professional duty.”

Wang Feng came of age in China during the Cultural Revolution, a time when access to university studies was denied to many of the country’s urban youth. Like many of his peers, Wang Feng was sent to the countryside where he spent three years in a small village in north China learning how to farm.

“I thought I was going to be there forever,” he says. “Life was extremely hard. We were in the fields planting and harvesting maize and sorghum for long hours during the day, seeing mostly meager yields due to the harsh natural environment in that part of China. For months we would not see any meat or even vegetables in our diet. But the villagers were very kind to us. We experienced and learned humanity on a daily basis.”

When a change in government leadership brought with it the reopening of China’s college entrance exam, Wang Feng seized the opportunity. His test score allowed him to gain entrance in the university, studying at Hebei University where he majored in economics. But his passion was in learning about society, specifically social structure, inequality, and human lives – marriage, childbearing, family, migration and more.

“In much the same way climate change is the global crisis of today, back then, it was the massive, unprecedented population explosion that had happened during the twentieth century,” he says. “The world population had more than tripled, and a lot of crisis thinking at the time was how the earth would be able to support so many people.”

With China accounting for nearly one-fourth of the world’s population, this was a particularly pressing concern. In response, the country’s government launched an extreme and controversial policy in the late 70s limiting each couple to having only one child with the goal of putting a hard brake on China’s burgeoning population growth. As a young scholar, Wang Feng was a critical observant of the policy’s rollout and shifting societal trends that were changing his country’s culture. His interest in population science piqued.

He applied and was accepted to graduate school and in 1983, he left China for the U.S. for the first time, beginning his doctoral studies in the Department of Sociology at the University of Michigan. He continued to expand his work in population studies – focusing on methodology as well as political and social contexts and consequences of demographic trends.

He completed his Ph.D. in just four years, a testament, he says, to his wonderful mentors who “took a chance on a very young international student.” He went on to complete a yearlong postdoc at UC Berkeley and then at the East-West Center in Hawai’i where his wife was also completing a fellowship. The couple had plane tickets and plans to return to China and teach in the country’s university system. The year was 1989. Just days before their scheduled flight, tanks rode into Tiananmen Square, and everything shifted.

Wang Feng and his wife, along with the rest of the world, watched in horror as hundreds of citizens were killed and thousands wounded during the government’s military response to protesters calling for political and economic reform.

The couple made the decision – with support from colleagues at the East-West Center – to stay in the U.S. Wang Feng was hired later at the University of Hawai’i, earning tenure just four years later in 1996. That same year, he took a visiting professorship at the California Institute of Technology. Down the road in Irvine, the then youngest UC campus had an open recruitment in sociology.

“At the time, there were only six faculty members in the department and no Ph.D. program,” he says. “But the reputation of the UC system and the immense opportunity for growth were a big draw.”

Coupled with Irvine’s highly ranked public school system where he could enroll his then five-year-old son, the decision was an easy one. Over the course of the next 25 years, he helped to grow UCI’s sociology department into the powerhouse it is today. He played key roles in recruiting top scholars to campus and launching the department’s Ph.D. program, currently ranked #9 among public U.S. universities. He chaired the department from 2007-10, focusing on faculty promotion, retention, and salary compression while overseeing an external academic review, all during a period when the global financial crisis was exerting budget constraints on campus.

Meanwhile, Wang Feng continued pursuing research on demographic changes in China and elsewhere. He published in 1999 his third book, One Quarter of Humanity, Malthusian Mythology and Chinese Realities 1700-2000, which received top awards from both the Social Science History Association and American Sociological Association. His subsequent books, on rising urban income inequality in China and on reproduction and human agency in historical Europe and Asia, received scholarly awards as well. For a decade and half since 2000, while continuing his other lines of scholarly pursuit, he focused his attention on an in-depth examination of China’s one-child policy, the effects of which were beginning to come to light internationally.

“We were twenty years in and seeing a huge increase in sex ratio at birth, in infant abandonment and mistreatment – including infanticide – of female babies,” he says. While demographers, doctors, economists and many others could see the problems the policy had created, changing a decades old state mandate that was now engrained in the world’s largest society wouldn’t be easy. For that, Wang Feng leaned into his academic training.

“I consider myself quite fortunate that my professional training is in demography and sociology when the issue at hand was population and birth control,” he says. With the precision of the scientist that he was, Wang Feng co-led a team of researchers to begin collecting data and working on research that would inform policymakers and the public as well, to push for the eventual lifting of the policy.

They painstakingly produced paper after paper examining historical analyses and international comparisons of emerging and developed economies, connecting the dots between fertility decline and increasing educational opportunities among women in China and globally, highlighting the policy’s negative impact on labor supply and the economy, and especially its long-term harmful impacts on human wellbeing, especially that of women, on the family, and more. Published in top sociological journals, presented at major international academic conferences, and compiled as multiple proposals submitted through back channels to China’s highest levels of leadership, they slowly made progress. While couples in a very few selected locales in China were allowed to have two children with a long interval between the first and second birth, the country’s top leadership was skeptical and hesitant to allow such practice to extend to other parts of the country, let alone to fully repeal the policy.

So, the research team made a measured move to engage the public and media to create more awareness and to change the public mindset that China needed to continue its extreme birth control policy at any cost.

“There was a media storm and we did a lot of interviews and reports,” he says. “It was a deliberate decision because the Chinese public needed and had the right to know. To criticize the policy openly carried obvious political risks, as that birth control policy was framed as a ‘basic state policy’ in China.”

Censorship and other pushbacks followed as expected.  Internal Chinese government documents framed Wang Feng as being a foreign agent subverting China’s state policies. His writings were censored before being published. Once he was stopped at the entrance of a broadcasting studio by direct order of the country’s state media monitoring bureau, at the urging of China’s birth control commission. The same commission issued warning calls to organizers at one international conference, strongly urging that Wang Feng not be allowed to discuss the one-child policy. But for all the risks he faced, Wang Feng says his paled in comparison to his Chinese colleagues whose careers suffered because of their research aimed at ending the policy.

And yet their work continued.

“As a seismologist, you see the earth moving and it’s your duty to report,” he says. “As a demographer, it was my duty to report on what was happening and use my expertise to make change.”

From 2010-13, he took a leave from UCI to continue pursuing research and advocacy through an in-residence role in China at the Brookings-Tsinghua Center for Public Policy. Serving in that role allowed him and his team to accelerate their efforts to disseminate research findings via public events and media collaborations, and to submit proposals leading to the policy’s elimination. And in 2016, China announced a full removal of the one-child policy.

“His leadership advanced not only human rights for more than one billion Chinese, but geopolitical stability as China pulled back from an unsustainable demographic future,” says Judith Treas, UCI sociology Distinguished Professor emerita. “In addressing one of the most disquieting social issues of the early 21st century, Wang Feng’s work brilliantly expresses the strengths of UCI and its influence in the world.”

For Wang Feng, the dismantling of the policy is proof that academic work has real world impact.

“There are so many forces and voices that made the lifting possible,” he says. “It was gratifying that our research and public advocacy contributed to the removal of one of the most consequential public policies in China.”

He’s now shifting his focus fully to inequality in China, a topic he’s explored over the years alongside his one-child policy work. His recently completed book - China’s Age of Abundance: Origins, Ascendance, and Aftermath – explores the country’s rise to material abundance, present predicaments, and future challenges due to internally driven demographic, economic and political problems. And he’s excited to continue finding ways to engage the public in his work to create positive change. His colleagues have zero doubt he’ll succeed in that regard.