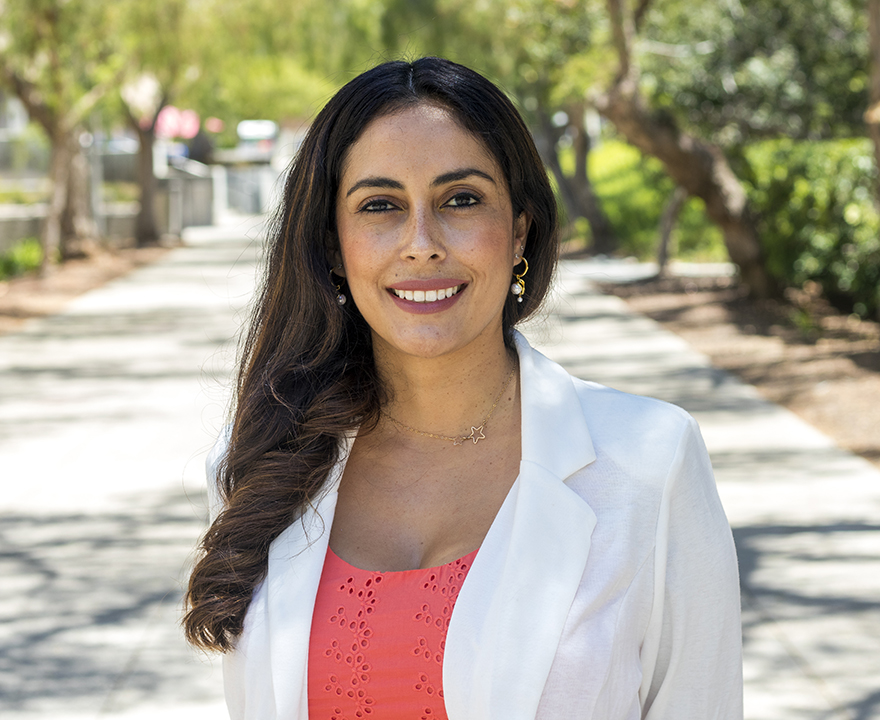 
Latina physicians – who comprise less than 2 percent of the total population of medical doctors in the U.S. – often play an outsize role as translators and caregivers compared with Latino and non-Latinx peers. These unpaid gendered and cultural taxes can be silent career killers and cause for burnout, says Glenda Flores, UCI Chicano/Latino studies associate professor. And COVID-19 has exacerbated the problem.

“Latina physicians deliver culturally competent care that’s indispensable to the communities they serve, yet these skills are routinely uncompensated, tokenized and taken for granted,” she says. “Their work beyond the traditional doctor-patient relationship has been a critical lifeline for their pandemic patients as Latina physicians have served as cultural support systems when families aren’t allowed to be physically present with their sick loved ones.”

“We need to recognize the bilingual and cultural abilities that prime Latinas for uncompensated work while also being more cognizant of biases we, as patients and peers, have for people we perceive to be in positions of power,” she says. “And we need to make sure students from undergrad on up understand sociocultural biases that are ingrained in systems and how, through mentorship, we can work together to address and fix them.”

The role Latina physicians play in the U.S. healthcare system – a particularly poignant one made more visible during the pandemic - wasn’t something Flores initially set out to study. The topic came to light during interviews for her award-winning book, Latina Teachers, in which she explores the role Latina educators play in promoting educational success and cultural identity for their Latinx students, often through practices that challenge norms about culture’s place in the teaching profession.

“During interviews, a lot of teachers said they were studying for careers in STEM – biology, microbiology, the like – but they were socially channeled into teaching,” she says.

Among the educators she interviewed who had planned to pursue medicine, two consistent themes emerged: the need to immediately support their families and the importance of accessible mentors.

“Teachers are often the first professionals many students see in action. And with a higher percentage of underrepresented populations serving as educators as opposed to doctors, students can relate to and see themselves more readily as teachers,” says Flores.

After finishing the book, she began to explore in greater depth what careers in medicine look like for Latinx individuals compared with non-Latinx peers. To date, she’s conducted 58 physician interviews and, prior to COVID, shadowed daily appointments to understand varying professional and patient experiences and interactions. Her questions and observations focused on the role culture plays in their work and how Latinx physicians broke barriers to achieve their MDs, and will be the focus of a new book tentatively titled, Pursuing Medicina [Medicine]: Gender and Ethnicity in the Work Worlds of Latinx Physicians.

Similar to Latinx educators, she found cultural competency to be, in many ways an asset when administering patient care. Latinas, more so than Latinos, are more likely to be bilingual and maintain it, Flores explains, and this is a particularly important point for the work Latina physicians carry out.

“Latina physicians play the critical role of ‘cultural brokers’ to help ease social interactions with Latinx patients,” Flores explains. “Using language and cultural competence, they foster trust; practicing mannerisms such as personalismo, they denote respect; and communicating an understanding of cultural beliefs and common homemade remedios (remedies), they build goodwill that creates acceptance among their Latinx patients to follow the medical advice.”

But this work comes at a price.

“The Latina physicians I spoke with said that they were less likely than their bilingual or monolingual male counterparts to say ‘find someone who can do this because I need to focus on other parts of the job,’” she says. “When the women did, they faced backlash that men didn’t experience.”

These microaggressions perpetuated in various observed patient experiences in which Latina doctors were asked when the doctor would be in, highlighting the common perception that “doctor” meant male, traditionally white, Flores says. Latina doctors expressed frustration at not being recognized for their professionalism alone and the lack of leadership positions available to them, despite feeling they take on more patients and patient care responsibility.

And when COVID hit, disproportionately impacting racially and ethnic minority communities, the isolating virus made the need for more bilingual and culturally competent caregivers even more pronounced. As a result, the unseen and uncompensated labor borne by Latina physicians was magnified, Flores says.

“COVID pushed everything to a new level because people couldn’t communicate with their family members,” Flores says. “For non-English speaking and immigrant patients, American medicine can be hard to understand. To be in a room by themselves and not know anyone, these bilingual Latinx physicians became lifelines for their patients.” At the same time, she notes the emotionally and physically taxing role is a recipe for burnout.

So what’s the solution?

“First, medical institutions should consider compensating Latina physicians for the covert workload escalators that their gender and cultural competencies create. Second, we can educate people better about the biases they bring into interactions with men and women and people from different racial/ethnic groups. And third, mentors matter. So does educating students on the variety of pathways they can take to an M.D.”

The latter are two areas she’s working to directly change through her work at UCI as both an educator and mentor.

“Mentorship takes time, but it’s worth it and necessary to help students learn that there are a lot of paths they can take to create change,” she says.