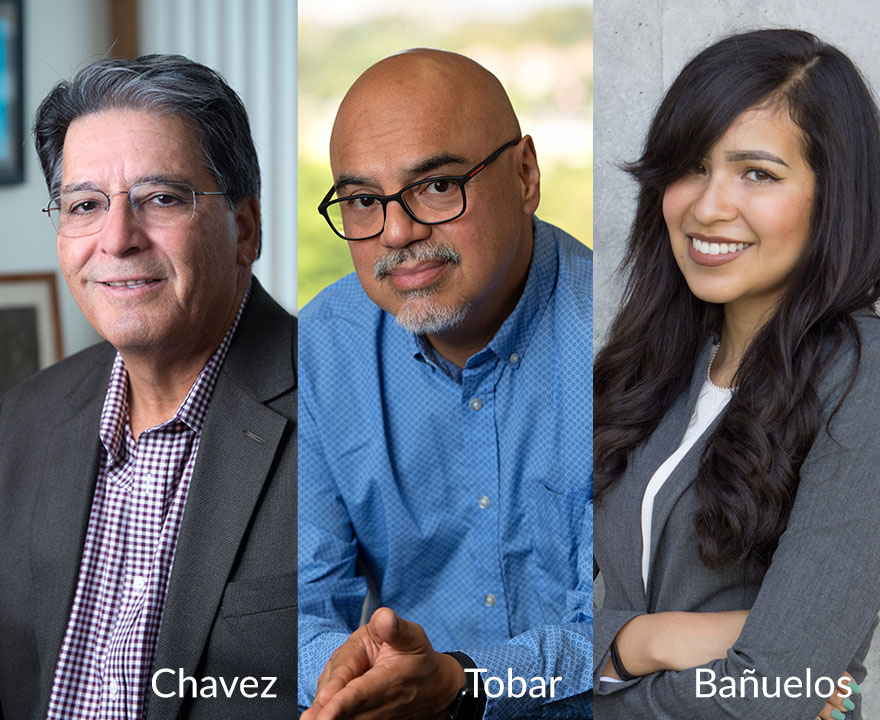 
Leo Chavez, anthropology Distinguished Professor; Héctor Tobar, associate professor of Chicano/Latino studies and English; and Maricela Bañuelos, sociology and Chicano/Latino studies graduate student, are among the 2021 campus Latino Excellence and Achievement Award recipients. Awarded by the UCI Office of Inclusive Excellence, the honors celebrate research excellence and achievements across all schools on the UCI campus and specifically those who provide encouragement and support for the Latinx community.

Learn more about Chavez, Tobar and Bañuelos below, and congrats to all those honored! Register now for the virtual awards ceremony to be held Apr. 1 at 5:30 p.m.

Leo Chavez has been a member of the UCI anthropology faculty since 1987. His research on transnational migration, particularly among Latinx communities, is the focus of four books, including The Latino Threat: Constructing Immigrants, Citizens and the Nation, which earned the American Anthropological Association’s 2009 Latina and Latino Book Prize. He’s authored more than 100 academic articles, produced two films, and penned numerous op-eds on the uphill battle undocumented immigrants face in American society with status affecting everything from physical and mental health to access to education and housing. His work has helped debunk stereotypes of the Latinx threat narrative echoed by politicians, pundits and journalists for which he consistently provides expert commentary. Chavez earned his Ph.D. at Stanford University. In 2017, he was named a fellow of the American Association for the Advancement of Science. In 2019, he received the Association of Latina and Latino Anthropologists Distinguished Career Award. And in 2020, he was named the recipient of the Bronislaw Malinowski Award, which will be presented by the Society for Applied Anthropology this month.

Chavez has mentored scores of undergraduates, many of whom identify as Latinx, as they pursue research, often for honors theses. He also mentors graduate students, primarily in anthropology, but in other disciplines as well. He has worked with graduate and postdoctoral students from the United States, Europe, and Latin America. His mentees have gone on to academic appointments at the University of California, California State Colleges, community colleges, and private universities, while others have chosen to put their academic knowledge to use in the business sector. Chavez also provides advice to faculty school- and campuswide. He is extremely proud of the accomplishments of his mentees at all levels.

Héctor Tobar is the author of five books, including the critically acclaimed, New York Times bestseller Deep Down Dark: The Untold Stories of 33 Men Buried in a Chilean Mine and the Miracle That Set Them Free. He is a 2020-21 Radcliffe Fellow with the Radcliffe Institute at Harvard University, which is supporting work on his next nonfiction book, A Migrant’s Light. The book will explore Latinx identity, and how it’s been shaped by a generation of xenophobia and anti-immigrant rhetoric, as well as how Latinx people find ways to defend and assert their humanity, in both private and public settings.

Prior to UCI, Tobar spent two decades with the Los Angeles Times, holding posts as critic, columnist, foreign correspondent, and national correspondent. In 1993, he and colleagues earned a Pulitzer Prize for breaking news. In 2006, Tobar was named among the 100 Most Influential Hispanics in the United States by Hispanic Business Magazine.

Tobar earned his MFA in creative writing, fiction at UCI and he joined the faculty as an associate professor in 2017. He teaches in the Literary Journalism Program, and in the Department of Chicano/Latino Studies, where he mentors many first-generation college students.

Maricela Bañuelos is a Ph.D. student in the Department of Sociology who is also completing the Chicano/Latino Studies Graduate Emphasis program. She’s a Eugene Cota-Robles and Provost Ph.D. Fellow whose work creates bridges between the four-year university world and marginalized Latinx communities in Orange County, Los Angeles, and beyond. In her research, Maricela examines the sources of support and obstacles that Latinx students face by using an intersectional lens to understand the experiences of doctoral students. She finds that there are racialized and gendered dimensions in how men and women doctoral students self-police their interactions with faculty, and how faculty interact with Latinx students. She’s the co-author of “Gendered Deference: Perceptions of Authority and Competence Among Latina/o Physicians in Medical Institutions,” which was published in Gender and Society in January.

Through her work with DECADE, a program to help underrepresented students navigate graduate education, Bañuelos has mentored many of UCI’s graduate students. She was also a part of City Year AmeriCorps in Los Angeles where she served as a math tutor and developed lesson plans that were culturally relevant to the young adults from marginalized communities with whom she worked. Bañuelos - the first in her family to earn a college degree - received her bachelor’s from UC Santa Barbara and master’s from UCI.