No excuses, no regrets 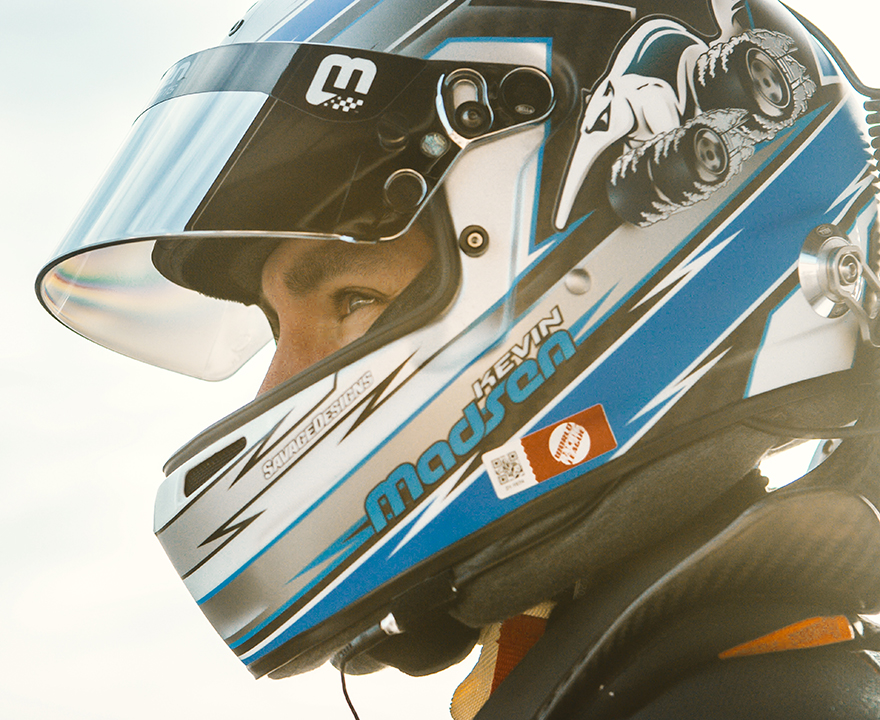 No excuses, no regrets


Kevin Madsen ’05 was not supposed to become a race car driver and sought-after coach. His roadmap was clear: learn auto mechanics, then aircraft mechanics, and eventually become a pilot, just like his dad before him had done, and his younger brother would do later.

But Madsen never got past the cars. At the age of 16, he saved up $750 to buy a used Mazda RX7, which he upgraded with a roll cage and started racing in autocross events. Driving a car more suited to the freeway than the speedway meant he needed to compensate by developing better driving skills. By the time he graduated from high school, Madsen was winning championships on a shoestring budget.

Those in the racing industry might argue that it was not the right choice for Madsen to balance his competitive racing to attend UCI at that time. But 15 years later, he has no regrets.

“I’ve always appreciated that the university took me from being a shy, small town kid, to being ready to go out and race against the best, and coach celebrities, captains of industry and young prodigies to take them to the next level,” he says.

Learn more about Madsen’s experiences on and off the track at our second be BOLD 2.1 “No Easy Roads” discussion March 31 @ 5 p.m. Catch a fun preview online, and be sure to register. 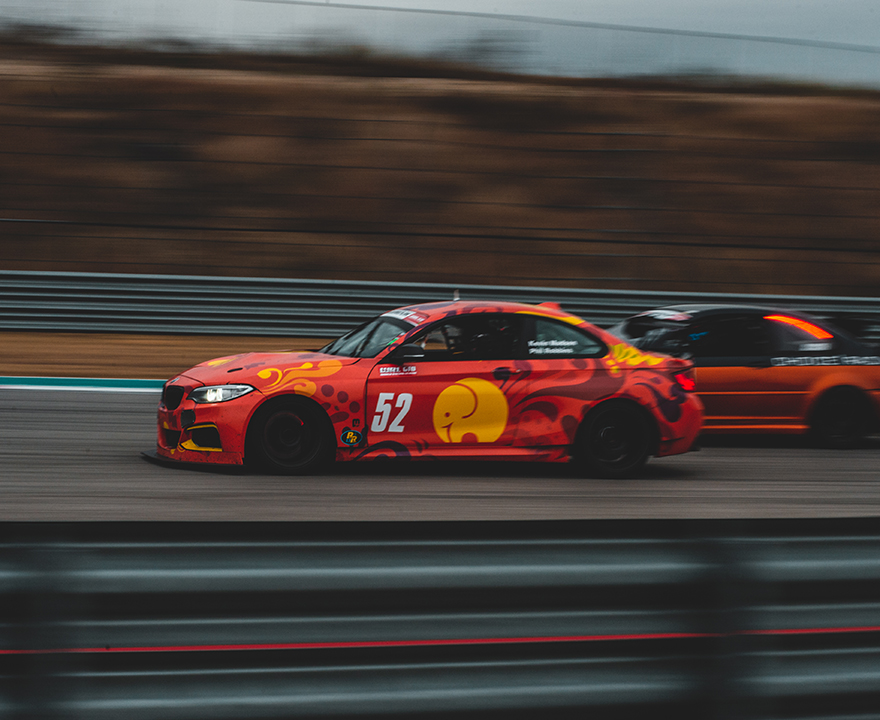 Focusing
Raised mostly in New Jersey and San Diego, Madsen was drawn to UCI for its academics, but he spent his first year stretched thin, trying to juggle school, while commuting, working and competing in a winning road-racing season. After that, he decided to focus more on his education, fully engaging with campus life while majoring in economics.

Madsen became president of the Kappa Sigma fraternity, held positions on the Interfraternity Council, Greek Presidents Council, and ASUCI, served as vice chair for the Anteater Recreation Center advisory board and chair of the Student Center advisory board, and led student programming in Mesa Court and Arroyo Vista student housing - all while working part time to earn money, racing and driving for UCI’s Formula SAE team.

“I had the opportunity to be involved in so many things on campus, and it was challenging, but I learned so much — not just from the successes but from the mistakes,” says Madsen. “In racing, no matter what is thrown at you, you can always improve, and I felt the same way about being a student leader.”

Those real-world interpersonal and executive skills that Madsen honed through student leadership experiences as an Anteater are what set him up for success on and off the racetrack.

Diversifying
After he graduated from UCI, Madsen worked in national sales for a travel company and raced on the weekends. But when he was laid off during the Great Recession, he wondered, why not go all in with racing?

With his attention focused fully on racing, he won a national title within the first year, and seven championships within the next four.

As he gained some name recognition and developed a reputation for himself, he found ways to diversify his career such as coaching kids, leading exotic car driving experiences around the country, and test-driving pre-production cars for Ford and other manufacturers out in the Arizona desert.

“I think it’s a challenge for anyone to figure out how to make a long-term career in a sport you’re passionate about,” Madsen says. “I decided coaching is the way I wanted to go,”

One influence in that decision was Madsen’s experiences with the UCI Alumni Association, where he worked briefly — while test driving and racing on the weekends — and served as a volunteer. Mentoring UCI students and helping develop the Young Alumni Council helped Madsen see first-hand the benefits and rewards of nurturing the next generation. 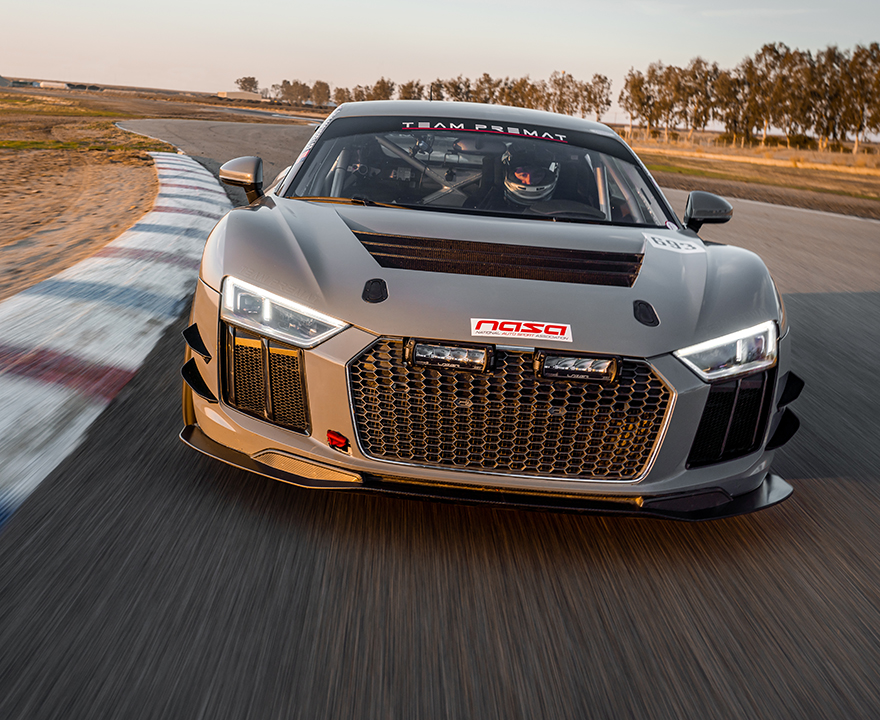 “Though not racing-specific, my time mentoring students in the Student Alumni Association was a key part in my decision to focus on coaching developing drivers,” says Madsen. “It’s incredibly rewarding to leave a lasting mark with future leaders and athletes.”

Madsen’s coaching isn’t strictly on the racetrack, either. Modern race car driving increasingly relies heavily on data analysis systems and racing simulators. So Madsen helps clients improve by leveraging these tools in combination with his own experiences overcoming faster, more expensive cars with practice and skill.

“You look back at something that you thought was the end of the world when you were a kid, and realize those were the keys that made you better,” he says. “I had no budget and a slow, unprepared car that made me work extra hard to become a better driver. Great!”

While his face may not be as recognizable as those actors, Madsen himself is a member of SAG-AFTRA as a stunt driver. He has driven for numerous car commercials including Toyota Super Bowl commercials, and appeared in the Netflix series Fastest Car and the movie Ford v Ferrari.

Enduring
Madsen still races, too, but his focus is shifting now toward more endurance races, which last from 8 to 24 hours with a team of drivers taking turns behind the wheel.

“As time goes on I enjoy endurance racing because it’s fun sharing the drive time with friends or coaching clients and I can utilize everything I’ve learned over the years,” he says. “Some younger or less experienced drivers could be faster than you for a lap, or more aggressive on passing, but you’ll be more consistent. In the long run, the car, tires and hopefully your result will be better.”

Like every field, racing has been upended by the COVID-19 pandemic. Madsen had been focused on racing and coaching at the 2020 Long Beach Grand Prix when everything shut down. He took the long view and invested in installing more racing simulators in his shop, which attracted NASCAR drivers and his coaching clients to continue working on their skills even when tracks were closed.  The simulators were booked solid for months.

“If you look at COVID-19, yes, it’s terrible, but we still have to think about life afterward and moving forward and improving,” Madsen says. “We can’t use it as an excuse for complacency, because we’re always going to have unexpected things thrown at us.

“The no excuses, no regrets motto has really helped me, with everything that’s been thrown at me.”

-Pictured top to bottom: Madsen shows off his UCI pride with his custom helmet featuring a racing Anteater (via Evan O’Hara/Low Shutter Media). Madsen raced to 7th out of 96 cars at the US Endurance Championships at Circuit of the Americas in December 2020 (via Evan O’Hara/Low Shutter Media). Madsen coaching and driving recently in an Audi R8 GT4 racecar in Southern California (via Armin Balg/Rennline Media).