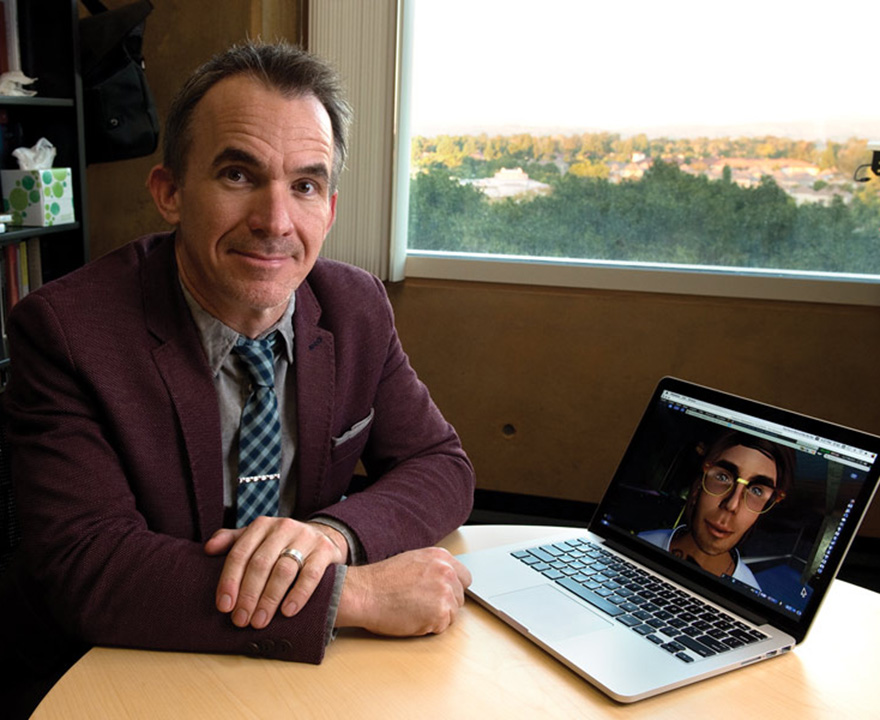 
UCI’s digital cultures class is a rare sight these days, with unmasked students sitting together, often shoulder to shoulder, in a large venue and listening attentively as anthropology professor Tom Boellstorff presents a slideshow. But the pre-coronavirus-style format isn’t flouting any social distancing guidelines. The class takes place in Second Life – a 3D virtual world that allows users to create communities and interact with each other – and the instructor and students are avatars.

Before COVID-19 restrictions, Anthro 128C was set to be held in the Anteater Learning Pavilion, a campus facility that encourages collaboration. When Boellstorff learned that it would have to go online, he immediately logged into Second Life and began constructing Anteater Island, a digital culture of its own.

He finished it in about a week, ensuring that it reflected the structure of the class, which involves lectures on weekly readings and group research projects. The site includes an auditorium and meeting areas for each student team, as well as spaces where they can display their work to the public at the end of the quarter, as had been planned before the pandemic. Indeed, Anteater Island retains many of the features that the Anteater Learning Pavilion would have offered.

Although the shift was a challenge, Boellstorff was in a fortunate position. He had been conducting rigorous fieldwork on Second Life since 2004 and published Coming of Age in Second Life, a book-length ethnographic study of the virtual world, in 2008. In addition, the class, which he had taught several times before, was about cultures in the digital realm. Due to the sudden lockdowns, students were about to become more immersed in them than ever.

Group projects this quarter revolve around the online communities of video games such as League of Legends and Animal Crossing, as well as how people make choices on dating apps like Tinder and the use of the video sharing site TikTok for education. Boellstorff is looking forward to conducting his own research on the effect of virtual worlds on people’s social lives during the pandemic, thanks to a one-year, $195,000 grant from the National Science Foundation.

“Social distancing is actually physical distancing. There’s a real need to understand what the role of this online interaction is,” he says. “We need to get away from talking about the physical world as the real world. Online sociality is a set of cultures that can be just as real as what’s in the physical world.”

Although the goal of Anteater Island is to provide an educational space, Boellstorff designed it with the hope that students would also use it to unwind. “I could’ve made a replica of the social science buildings, but I purposely chose not to do that to give it a more playful flavor,” he says.

The virtual campus is like something out of a dream. On the shore of the island – which is surrounded by water teeming with the shadows of swimming sea creatures – the classroom is open-air, under a changing sky. When students aren’t working on their projects, they can play tabletop and video games, lounge around a campfire, drive bumper cars or ride a roller-coaster (dubbed Peter’s Plunge, after UCI’s mascot).

Boellstorff believes that the educational possibilities of online universes must be leveraged and that it’s important to move beyond a “compensatory” model of remote learning. “Virtual space gives you a sense of shared space that you don’t get with a phone call,” he says. “Zoom fatigue is an interesting aspect, because I find engaging through an avatar less stressful than Zoom. There’s something lost with having an avatar, but there’s also something gained.”