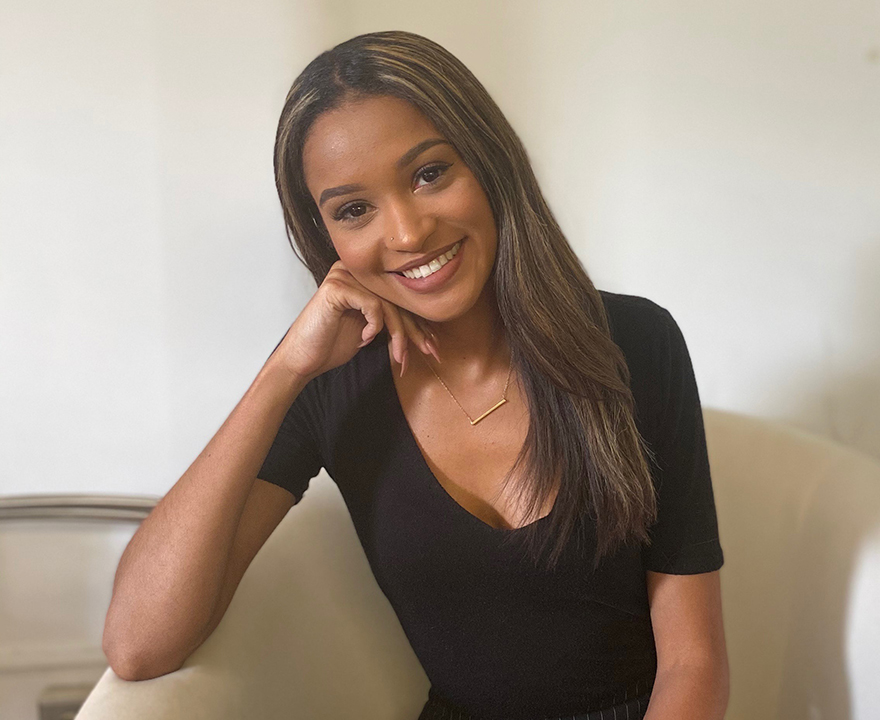 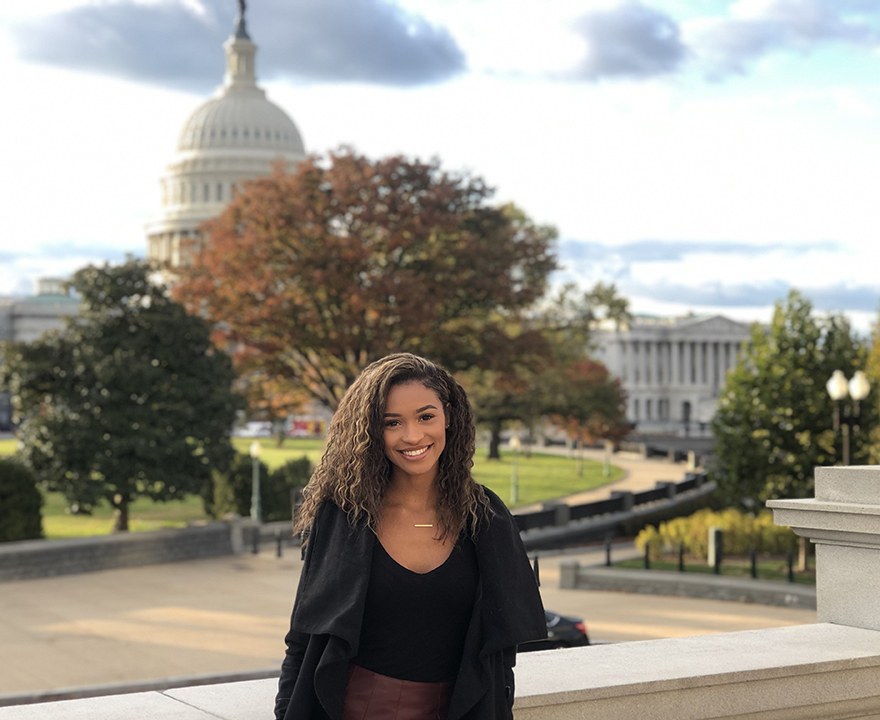 UCI political science student Amber Appling had such a positive experience interning in Washington, D.C. through UCDC that she plans to move there and work full time after she graduates in spring. But she almost didn’t get to have the D.C. opportunity.

“I was very close to not being able to do the program,” Appling explains.

Her experience - and persistence - offer a lesson for others navigating challenges in their college pathway, and a reminder that sometimes we all need to ask for a little help from our friends.

Born in Covington, Georgia and raised in the San Francisco Bay Area, Appling is a financially independent student who works 30 hours a week while carrying a full load of courses. She’s used to being self reliant and, as the oldest of five children, Appling says she knows her younger sister and three brothers look up to her.

“Where I’m from has an insurmountable influence,” she says. “I’m the first in my extended family to go to college. I want my siblings and my cousins to know that it’s possible, despite the barriers against them.”

When Appling transferred from community college to UCI to study political science, she was immediately interested in the UCDC program, which enables UCI students to take classes and intern in the nation’s capital for one quarter. However, as a transfer student on track to finish her degree in less than two years, she was on a compressed timeline to apply for the program and land an internship.

The first obstacle: get a letter of recommendation from a professor even though she had just arrived on campus.

“I didn’t even know where the gym was on campus, and I certainly didn’t know anyone on campus,” says Appling. “As a financially independent student and transfer, I didn’t have time to worry about meeting with professors and getting to know them.”

Although Appling didn’t frequent office hours, she actively participated in class discussions. So when associate professor of political science Daniel Brunstetter heard she needed a recommendation letter but had not asked him for one, he gave her advice that resonated.

She recalls, “He told me that if you tell yourself no, then you’re not even giving other people the opportunity to help you. Always ask, always ask for help, because the worst thing they could say is no, and that’s what you were expecting in the first place.”

Brunstetter wrote her a glowing recommendation.

Appling still needed to land an internship in Washington, D.C., a requirement of the UCDC program.

Enter Tiffany Willoughby-Herard, associate professor of African American studies and political science, another faculty member who was impressed with Appling’s presence in class.

“Amber was a real standout in particular because she was able to bring what she had learned in political science to her African American studies courses, and able to transverse the two conversations with ease,” Willoughby-Herard says.

Willoughby-Herard says she recognized in Appling something of herself as a young person, and she reached out to her extensive national network of political scientists. Within 24 hours, she had secured a spot for Appling to intern in D.C. at the Congressional Black Caucus Foundation, a nonprofit, nonpartisan research and education organization.

“Black women political scientists use associational life - a dynamic that may be the result of marginalization,” says Willoughby-Herard, explaining the power of the network she leveraged to help Appling. “We understand that we’re going to get the door slammed in our faces, but if you take two extra steps to help us, then we’re going to bring and mobilize 500 extra people with us.”

For Appling, this was another important revelation: UCI students are surrounded by faculty who are well known experts in their fields, and who know other experts.

“You forget that you’re in a building with professor X, who’s connected to professor Y, who maybe wrote a book about a topic you’re really interested in,” says Appling. “I wish I could go back and tell my younger self not just to think of faculty as professors, but to capitalize on how well qualified and well connected they are.” 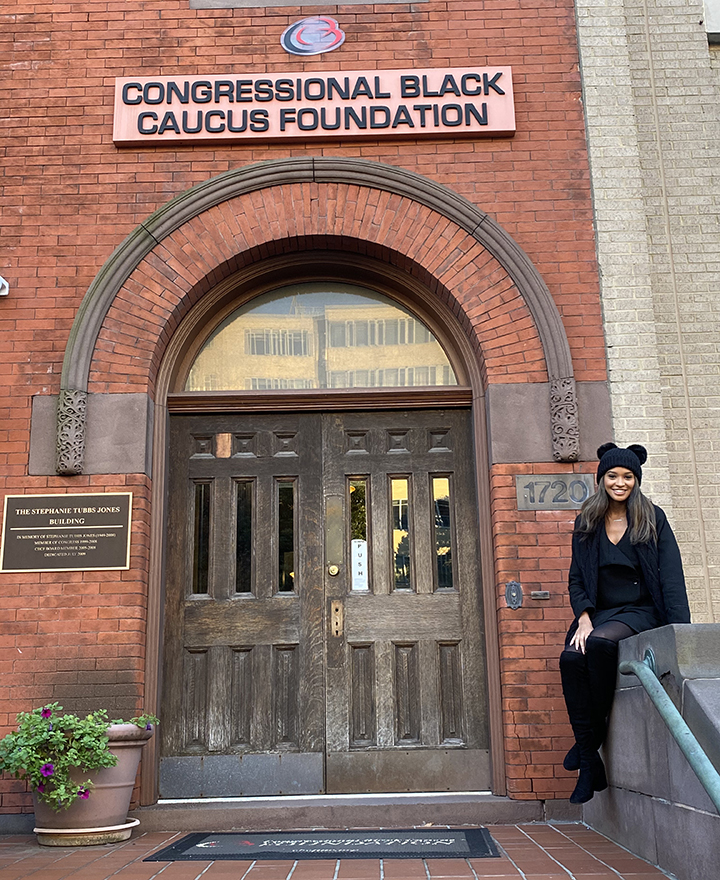 With her application accepted and a perfectly suited internship lined up, Appling was ready to head to UCDC in the fall of 2019.  But then came the financial troubles.

Money was already tight, and Appling was relying on her waitressing job with grants and loans to pay for educational and living expenses. As the deadline to commit to UCDC drew near, and critical details like purchasing an airline ticket came into focus, she realized she was going to be a few hundred dollars short.

“It’s an unfortunate thing to work very hard, and be so excited to get into the program, and then the only thing that comes in the way is money,” says Appling.

As the realization set in that she might not be able to go to D.C. after all, she confided in her friend and classmate Lorraine Nance.

Appling and Nance met in Willoughby-Herard’s course on African Americans in U.S. Foreign Policy, and they worked side-by-side over the summer as research assistants for Willoughby-Herard, who was editor of the National Political Science Review.

A student athlete who works at UCI’s Center for Black Cultures, Resources & Research and is active on campus, Nance knows who’s who around UCI, and she’s not afraid to speak up. So when she heard Appling might not go to D.C., she went straight to Matthew Beckmann, associate professor of political science and chair of the UCDC Academic Advisory Committee, to plead Appling’s case.

“Lorraine said our institution has this money, we have this resource, and we need to make sure we can do this,” says Willoughby-Herard. “We have someone who can imagine themselves in an internship, and we all need to pull together to get it done. At a public research university, that’s the ethical thing to do.”

Sure enough, Beckmann was able to procure a $1,000 scholarship from the School of Social Sciences to bridge the funding gap. Since 2013, with support from the Dean's Leadership Society, UCI social sciences has nearly doubled the number of Pell Grant recipients participating in UCDC by supplementing students with need-based scholarships. It made all the difference for Appling, enabling her to be part of UCDC.

“Every university tells its students that it is training the next generation of leaders,” says Beckmann. “What makes the University of California extraordinary is that it goes so much further: building an academic bridge between California and Washington and supporting those students who endeavor to cross.”

“The biggest thing that shocked me is how well I snapped into D.C.,” says Appling. “Being here feels like it’s where I’m supposed to be. Everything feels natural.”

Appling found her work for the Congressional Black Caucus Foundation to be particularly meaningful, including working on a PSA about how access to clean running water varies considerably across demographics in the U.S.

Beyond the internship itself, Appling says that her experience at UCDC helped her grow more confident in herself and more comfortable with people who hold completely different ideologies. In fact, she hopes to return to D.C. to work full time after she graduates from UCI in 2020.

Despite being at UCI for less than two years, Appling says she feels a real connection to the faculty she worked with. “I am blessed that my professors at UCI really did care about me and the trajectory of my career and my personal life,” she says.

Meanwhile, Nance, who still has two more years at UCI, is making her own plans to intern at UC Sacramento or UCDC, when her athletic schedule allows her to be away from campus.

“I want to be the stepping stone and just project others around me to do greater things than what I can imagine, and that goes for my siblings, my cousins, and Lorraine,” says Appling. “I don’t want it to end with me. I want it to just be the starting point.”