Vanquishing the 'us vs. them' mentality 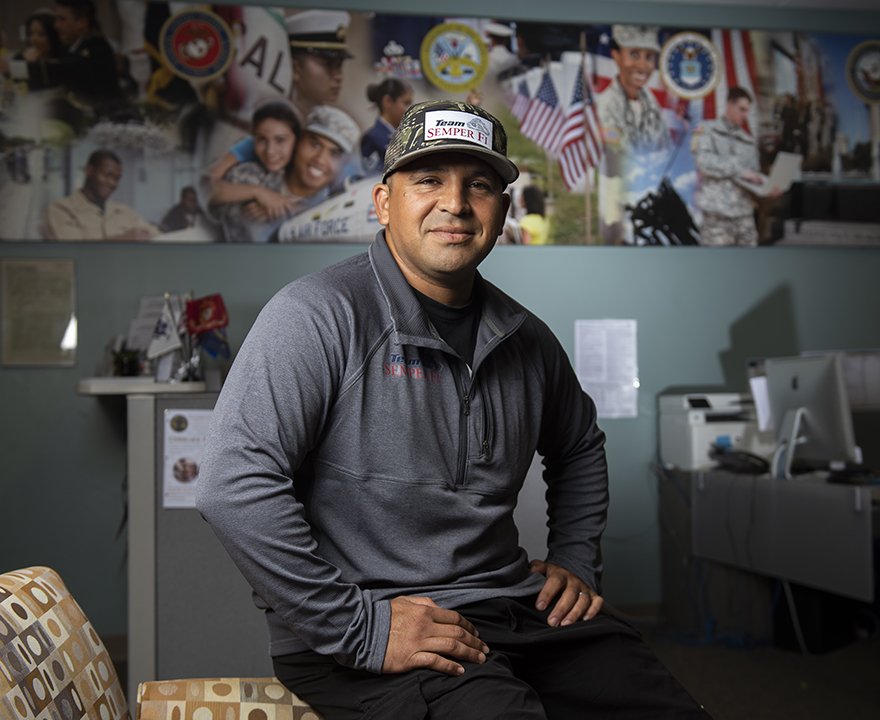 Vanquishing the 'us vs. them' mentality


One wouldn’t normally connect the mentalities of gang members and soldiers, but this is exactly the point of a project led by Eric Perez, a fifth-year Chicano/Latino studies and sociology major at UCI. Growing up in Santa Ana, he’d been surrounded by gang culture, and while serving in Iraq in the early 2000s, Perez noticed in his fellow Marines a similar intense loyalty to a cause and their “brothers in arms.”

Then he lost a close friend in battle and, some years later, another friend to gang violence. Perez recognized the same feelings of hatred boiling inside himself for “the other” – be it an enemy combatant or a rival gang member. Eventually, through therapy, he was able to overcome these emotions. After leaving the service, he enrolled at Norco College in 2013 and later transferred to UCI.

During a class preparing veterans for academic success, Said Shokair, director of the campus’s Undergraduate Research Opportunities Program, inspired Perez to devise a UROP project examining the parallels between gangs and the military. He initiated a six-student class twice a week at Orange Grove High School – a continuation school in Corona for at-risk teens who’ve often been involved in gangs – on the vices of the “us vs. them” mentality engendered by both gangs and the military, two common pathways for continuation students.

Through activities, discussions, positive affirmation and even simple acts such as giving thank-you notes to educators, Perez teaches the young men – who are there at the recommendation of school counselors – to value and respect themselves and others. “I want them to know that there are life experiences you don’t have to go through,” he says. “How do you take what you think you know about ‘the other’ and move past it, grow from it?”

It can be challenging. “In modern combat, there is no uniform; there’s just the person next to you,” Perez says. “So the potential loss of that person is what fuels the us vs. them mindset. But that mentality clouds their judgment. If I’m not really looking at the whole situation and taking a step back, detaching myself from it, I might be consumed by it. I’d be distracted by hate. The grief at losing someone is not allowed to manifest; the wounds are not allowed to heal.”

With these kids, especially those who grew up in households with military or gang connections, Perez has to find ways to break down the walls those mentalities created.

For instance, when he asked the students to write thank-you notes to their teachers, he was met with resistance, because they felt it was them vs. the educators. They didn’t see themselves in their teachers, Perez says, so it didn’t occur to them that what their teachers did had value.

“I asked them what they wanted to see change, and they said they wanted to be respected, so I showed them that giving respect to someone going out of their way to provide knowledge so they can grow is something very respectable,” he says. “The students’ job is to see what they’re doing and reciprocate.”

Perez’s goal is to teach the teens to value themselves as human beings, despite their circumstances. “When you’re coming out of nothing, it’s rare to have a positive influence,” he notes. “So we just want this program to be a light to help guide them on a path that’ll give them the opportunity to develop into something different.”

At a UROP symposium in May, Perez will present his findings – based on the class – about techniques to circumvent destructive mentalities promoted by gangs and the military. He hopes to expand the project to other schools and, after graduating, continue giving back to his community through programs for underrepresented youth.

“We are the creators of our universe,” Perez says. “That’s where the power lies: knowing there’s something you can do to change your reality.”

-pictured: When an individual who has lost someone is consumed by hate, says Eric Perez, a fifth-year Chicano/Latino studies and sociology major, “grief is not allowed to manifest; the wounds are not allowed to heal.” He created an outreach project based partly on this insight through UCI’s Undergraduate Research Opportunities Program. Steve Zylius / UCI