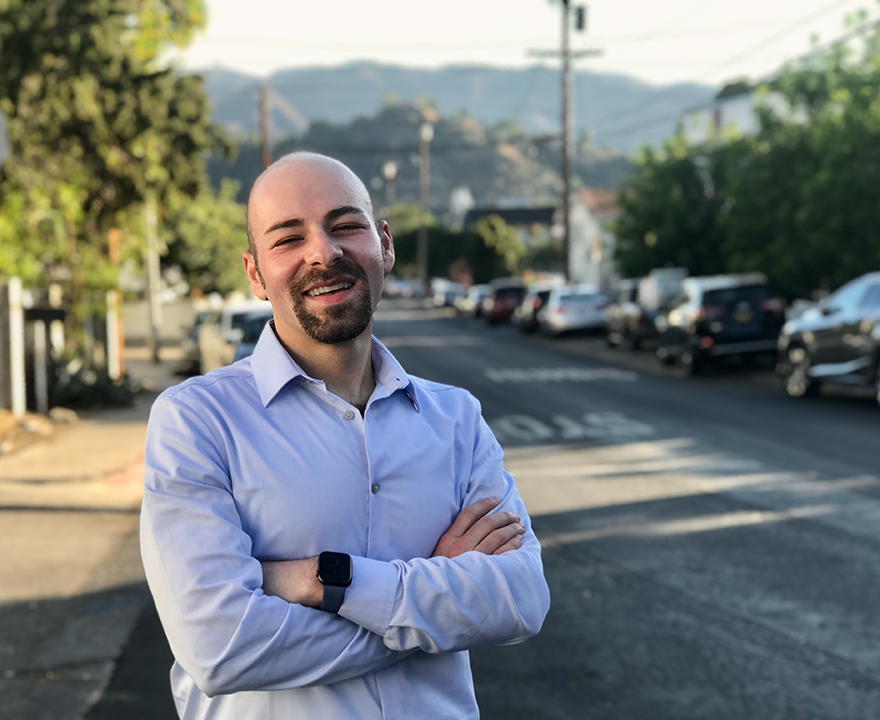 
As an impressionable sixth grader, Oshin Khachikian occasionally accompanied his aunt on visits to her research laboratory when she was in graduate school. He remembers her doctorate graduation ceremony as his “aha” moment, the point when he knew that he, too, would strive to earn an advanced degree.

Growing up in the Los Angeles suburb of Glendale, California, where nearly one-third of residents are Armenian American, the type of informal mentoring that Khachikian experienced was not unique. Due to U.S. immigration laws, Armenians, like most immigrants, are often highly educated. Even when the families join the working class in America, their children are more likely to complete a college degree than similarly educated families who are native born.

Khachikian’s parents immigrated to the U.S. from Iran with graduate degrees and years of professional work experience, but as with many immigrants, their credentials didn’t promise them middle-class lifestyles in America. Both of his parents held working class jobs in the U.S. Nonetheless, he benefited from growing up in a community of Armenian Americans who had made more progress, and whose children knew how to navigate higher education, establish upwardly mobile careers and build professional networks.

Khachikian attended Pasadena City College before transferring to UCLA to earn a degree in global studies. He then pursued a master’s degree in social science at the University of Chicago.

His story is a textbook case of what sociologists call social capital.

“When the immigrant national origin group’s education level is higher than those who stay behind in the home country, that correlates to achievement even for the working class children in that group,” explains Khachikian. “That was certainly my experience.”

But Khachikian had a hunch that what was happening in his hometown was even more complicated than that. “I read the finding about group-level education in one of my graduate seminars, and then thought to myself: ‘wait a minute, kids typically aren’t walking around with knowledge about their immigrant group’s education levels, they just enjoy the social resources as a taken for granted norm--and they certainly make friends with classmates from other families and ethnic backgrounds at school,’” he says.  “So I thought, ‘couldn’t social capital spillover across ethnic groups?’”

Now a graduate student in sociology at the University of California, Irvine, Khachikian won a 2019 National Science Foundation (NSF) Doctoral Dissertation Award to support his research on how social capital is exchanged across ethnic groups, and within schools and communities. He was one of just 37 sociology graduate students in the nation to win the award this year.

“Oshin's project opens a black box and importantly advances our understanding of a very consequential social process about why some immigrants succeed in our society, while others do not,” says Nina Bandelj, professor of sociology and Khachikian’s advisor.

As a graduate student, Khachikian has studied boy scouts, for example, and found that these well-rounded kids benefit their entire social networks.

“There’s a spillover effect, but not because the boy scouts are going to school and teaching their school friends how to tie knots,” Khachikian explains. “Some kids become ‘resource nodes’ for others in their social network.”

Within the high school community, this means that a student whose older sister went to community college and then transferred to a university, becomes an informal resource for their classmates, transferring social capital across families of different ethnic groups .

For his dissertation research, Khachikian turned to his alma mater, Glendale High School, as well as the local community college. Glendale Community College makes an ideal location for his research because economists ranked it 7th out of 2,463 colleges and universities nationwide in successfully moving students from the lowest fifth of the income distribution to the top fifth. Khachikian believes the social structures of the students in this community help impoverished second-generation youth transfer to, and graduate from, four-year schools.

“The ethnographic research I’m working on in this community identifies understudied, and marginalized, college preparation strategies that nevertheless constitute successful pathways to mobility,” he says.

Khachikian’s research focuses on Glendale students from Armenian, Filipino, Mexican and Salvadoran backgrounds. Because the levels of education among adults in the former two groups tend to be higher than the latter two, he hopes to understand how social capital crosses their ethnic groups, to the benefit of all the students.

He has collected over 120 interviews and hundreds of hours of observation field notes, which have already led to three published articles and a book proposal. The funding from NSF will enable him to follow students for a longer period of time, after they graduate from high school and go to college, to see if the effect of inter-ethnic group friendships continue to impact not just their college trajectory, but their career aspirations.

One of Khachikian’s major findings is that peers help reduce the stigma of attending a community college as a stepping stone to a prestigious university.

“Friendships help reduce the stigma of community colleges by providing social support for their identities, helping prevent students from taking on a self-perception of being underachievers,” says Khachikian. In fact, he has proposed a book on this very topic.

One of the ways the stigma is reduced is that many highly educated immigrant parents attend local community colleges to retrain for the U.S. workforce, thus creating pathways and de-stigmatizing community colleges for the children within their ethnic group and, in some cases, for their children’s friends and classmates, as well.

“Most previous research on the topic relies on quantitative analyses, and in many ways assumes the causal mechanisms that underlie educational inequality. In contrast, Oshin's ethnographic comparative study can tell us what happens on the ground,” says Bandelj. “How do children of immigrants understand their college trajectories? How are these trajectories shaped by how their ethnic group is organized, the types of friendship networks they have, and the kind of high school guidance they receive, or, regrettably, often do not receive.”

When Khachikian completes his Ph.D., he plans to continue his research as a professor, and to teach a new generation of students.

“The best part about doing research is discovering that the way you thought things work is not actually the way things are at all -- that the data support a very different story,” he says. Which is exactly what he’s discovering in his own hometown, as more and more students of all ethnicities, go on to college.