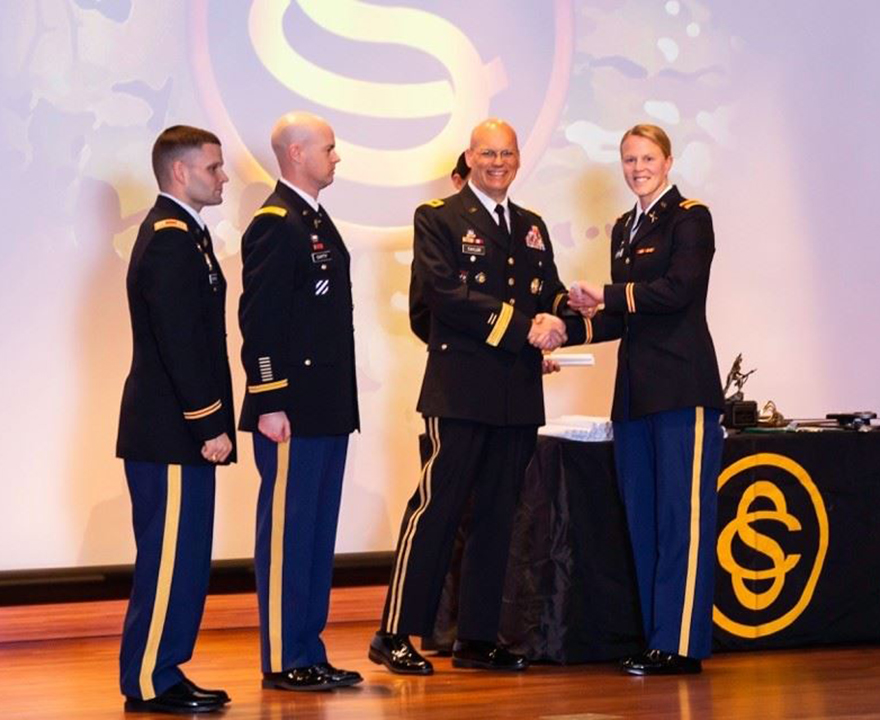 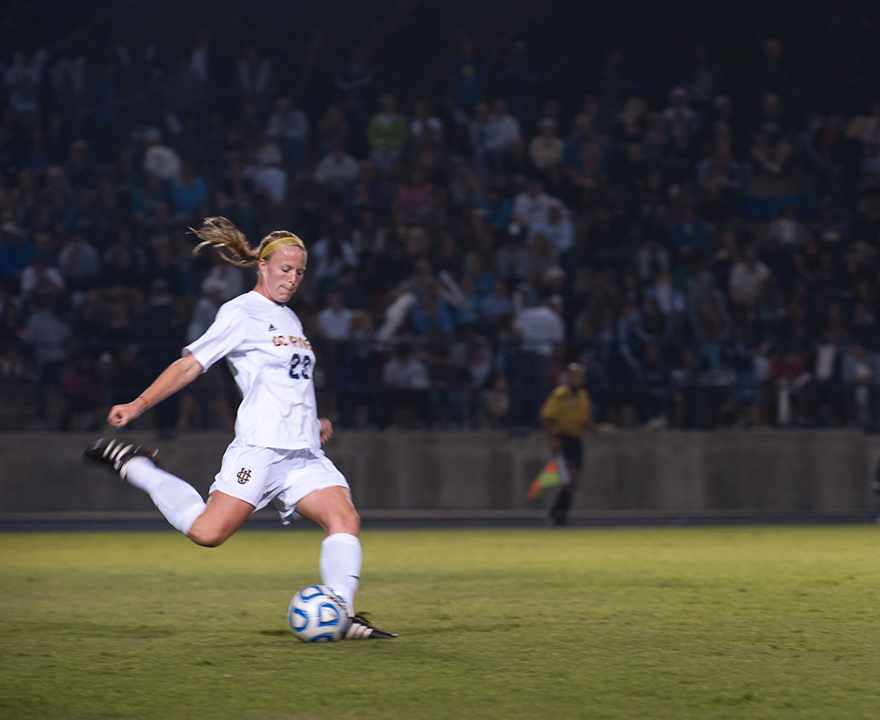 "I always wanted to serve. My grandparents served, my uncles served, we just have a long line of military involvement," she says.

Goodson's mindset had always been moving toward something more even after her two banner years as a student-athlete at UC Irvine. She joined the Anteaters after two years at the University of Texas, and was an instant jolt to the program helping as part of both NCAA Tournament teams for the program including the 2010 squad that set the bar for UC Irvine women's soccer with 19 wins and a trip to the NCAA Third Round. As a defender, she shone just as much on the offensive end scoring 12 goals and assisting on five others in her 45 matches played earning her the honor of All-American in both seasons. She and teammate Tanya Taylor were both recognized as the first All-Americans in program history in 2010, and Goodson added her second award in 2011 where she still stands as the only two-time All-American the program has seen on top of the first player from UCI or even the conference to be considered for the MAC Hermann Trophy.

Her performance took her to new heights in the professional ranks - drafted 12th overall into the Women's Professional Soccer league following that season, journeying to the Netherlands to play for Twente FC for one season, and then settling into the National Women's Soccer League to play for four seasons with New Jersey-based club Sky Blue FC tangling with soccer greats Abby Wambach, Carli Lloyd, and Heather O'Reilly just to name a few.

Five years of professional soccer under her belt, she returned to Southern California where she originally grew up as a native of Ramona, Calif. looking to finish her degree at UC Irvine which she did in 2015 while also helping volunteer on the coaching staff. 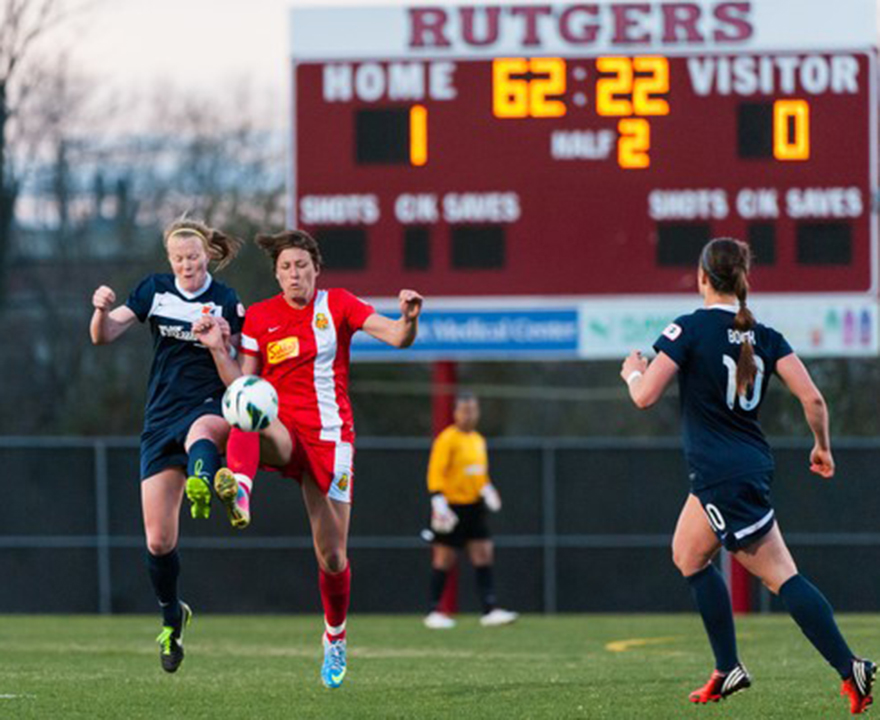 "I came home and coached and taught and had a good time, but I was a little restless," she says. "I need to be doing something else, and the military really fits my lifestyle with traveling for professional soccer."

"CoCo was obviously a high-impact performer for us while she was at UCI," according to Head Coach Scott Juniper. "More importantly, she has continued to grow in her years beyond college. We are so proud of her seeing all that she has achieved, and I’m excited to see what is in her future,"

Goodson harkened back to her first year with the program during the spring season.

"Coach Juniper had put together something with the Marines at Camp Pendleton going through the obstacle course, learning leadership, a great experience, and I thought that was super cool. Very much had to do with teamwork and knowing when to step up and take direction from others," she says.

So CoCo looked into it and enlisted putting her at Officer Candidate School in Fort Benning, Georgia. "I went the OCS route. I graduated there and now am military intelligence with branch detail field artillery." Goodson completed Basic Officer Leadership Course for field artillery in Oklahoma, and returned to Georgia to Airborne School before landing where she is now at Fort Bragg, North Carolina at her current duty station.

"Originally, I wanted to fly, but they weren't taking people for aviation. They told me I seem like a really strong leader, I should go the officer route," she says. "I talked about it with my parents and decided this is probably a good move."

That was in December of 2017, and Goodson went through basic training, OCS, and BOLC in a year and three months to reach her current level of 2nd Lieutenant and Fire Support Officer. Her primary objective is identifying targets and enemy vehicles, calling in the grid, and assessing whether it's safe to send order to the gun line that she calls in through forward observers. In addition to all her other duties, she's part of the 82nd Airborne Division widely considered an elite division specializing in airborne operations. To top it off, the legendary unit is nicknamed "The All-Americans".

"Especially with the 82nd airborne, it's the top duty station and division in the army. They have so much history, and airborne is pretty special, a select few get to be airborne, so its pretty cool to wear that and wear the All-American patch," she says.

Goodson's current unit is also part of the Immediate Response Force needing to be ready to deploy within 18 hours at any moment. "Depending on what is going on in the world, if there is a need to send people, we would be the unit they send." Goodson says her unit is slated to deploy by 2021, but realizes at any moment the call could come.

Always restless and looking to move forward, her next goal is to be a jump master and platoon leader overseeing airborne jumps while overtaking a platoon and the day-to-day of the soldiers and their needs, training exercises, scheduling, and everything that comes with it.

"I definitely think being a captain on the soccer team is being a representative of the team. If there were any issues, I would go to coach and talk through the issues. That definitely helped and 100% translates to what I do now. The leadership aspect from my time at UC Irvine soccer directly translates, and discipline is number one."

UC Irvine Athletics will be hosting its second annual Salute to Heroes Game on December 7th as Men's Basketball hosts Cal Baptist. The theme will pay tribute to Veterans, Military Service Members, and their families. Local Veterans and Military Service Members will be honored during a special pregame ceremony. All information can be found at the Salute to Heroes page.