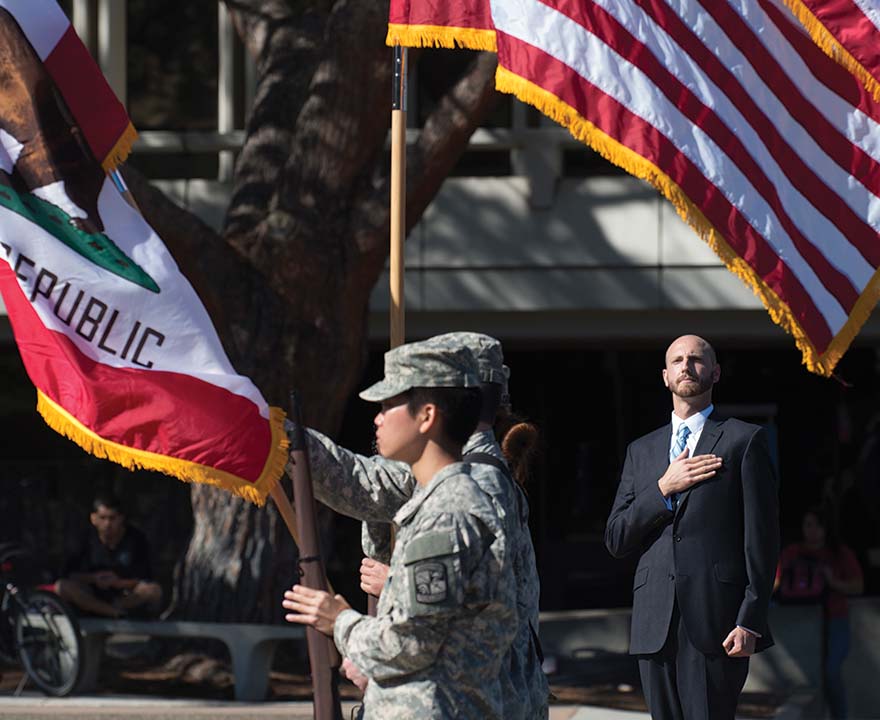 
When people think of underrepresented groups in academia, veterans generally aren’t the first to come to mind. UCI’s School of Social Sciences hopes to change that. In January, it will offer the first of three courses in a new certificate program focusing on veterans and their multiple roles in U.S. history and society.

Dean Bill Maurer and Anita Casavantes Bradford, associate professor of Chicano/Latino studies and history, conceived of the program as a way to raise the visibility of the veteran community, help vets feel more included on campus and serve workforce needs.

“The School of Social Sciences by nature questions identity and empowers difference,” says Maurer, a cultural anthropologist and sociolegal scholar. “This certificate program will share veteran experiences from wide and varied angles – gay, straight, brown, black, white, male and female. We must ask questions so that the totality of what it means to be a vet is examined. The social sciences are uniquely equipped to ask these questions.”

“Too often, veterans are portrayed as either heroes or damaged,” Casavantes Bradford adds. “Drawing upon critical insights from disciplines like Chicano/Latino studies and gender & sexuality studies, our curriculum will explore the complexities of veterans as whole people.”

Open to all undergraduates – veterans or not – the program encompasses three classes: Veterans in History and Society; Veterans’ Voices: Culture, Identity and Expression; and Veterans’ Transitions. It’s intended for students aspiring to careers in a wide range of fields, including healthcare and law, who expect to work with former military members in the future.

The veterans studies program fills a critical need, given that there are 18 million veterans living in the U.S. today, making up 7 percent of the population, according to the most recent census data. It also fills a gap in career training identified by the U.S. Department of Veterans Affairs, which noted a scarcity of job applicants with broad knowledge of this demographic.

“When we began to explore the idea of a certificate program focused on veterans studies, we were shocked to find only three places in the nation offering something similar,” Casavantes Bradford says. “Not only will we be the only institution in California providing this program, but we’ll also be the only one west of the Mississippi River.”

The novel course of study is the latest manifestation of UCI’s commitment to veterans, specifically the 300 or so student veterans on campus. The university’s Veteran Services Center, a division of Student Affairs, assists them in transitioning to college, helps manage their GI Bill benefits, and celebrates veteran culture through events on Memorial Day and Veterans Day. A new director for the center, Army vet Dani Molina – who founded the Veterans Resource Center at Cal State Los Angeles – was announced just last week.

UCI veteran suicide researcher and U.S. Navy vet Harwood Garland, who’ll teach Veterans in History and Society this winter, says: “People need to know that we are more than damaged or dangerous. Through this program, we can improve the way vets are perceived in our culture. We’ll discuss unique veteran experiences like deployments, homecoming and transitioning out of the military.

“Three veterans have earned Nobel Peace Prizes, but they aren’t much talked about. Just last year, two Marine Corps veterans won a prestigious UCI robotics competition. There is plenty of evidence that veterans want to be – and can be – valuable assets to their communities. I hope this program helps the next generation of veterans and nonveterans figure out how to make that happen.”

Adds Maurer: “What we deem worthy of academic study – and how we approach that – says a lot about what our society values. By providing a space for studying and learning about veterans, we hope to validate this UCI student community. We’re saying to them, ‘You are important.’”