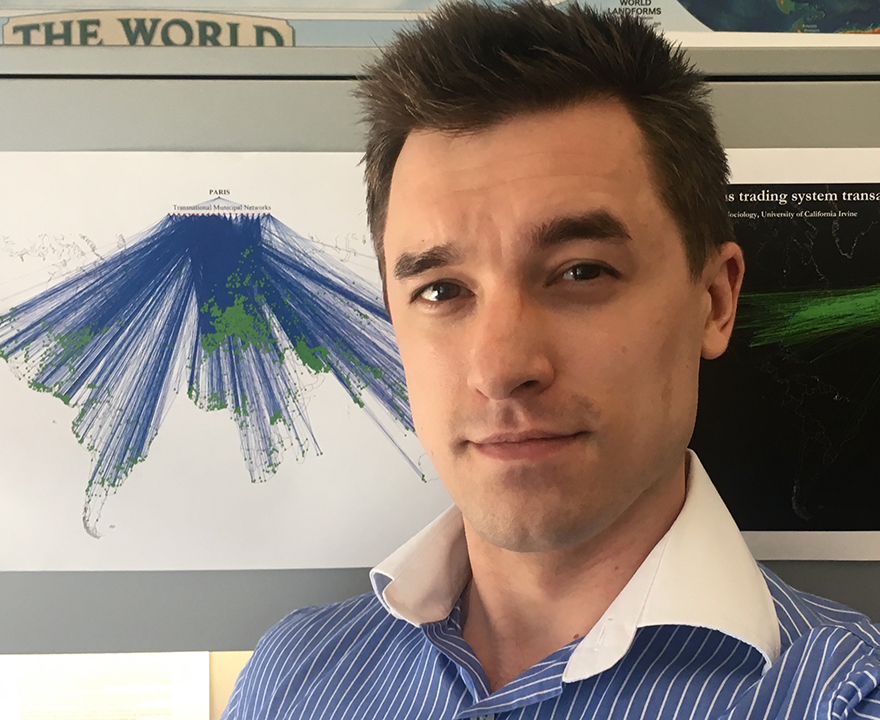 
Ben Leffel, UC Irvine sociology Ph.D. student, thinks the secret to saving the planet may not hinge on nations joining the 2016 Paris Agreement, but on significantly smaller commitments—by cities and companies at the local level.

Recently, Leffel won a National Science Foundation (NSF) Doctoral Dissertation Research award to advance his work identifying what factors lead some cities and firms to lower their carbon dioxide emissions, while others don’t.

National-level pollution data does not reflect the fact that greenhouse gas emissions are uneven within any single country, as some cities increase their pollution, while others decrease, Leffel points out.

“This dissertation is one of those relatively rare cases in which Ph.D. research might really contribute to an understanding of some alternative way to ‘save the planet’ via a positive impact on reducing greenhouse gas emissions and concretely addressing climate change,” says Leffel’s advisor, David A. Smith, professor of sociology in the School of Social Sciences and urban planning and public policy in the School of Social Ecology. “Obviously, that would be very significant.”

As new data becomes available about greenhouse gas emissions at the business and city-level, Leffel has been among the first researchers to unpack insights from the numbers. With the NSF award funding, he will purchase newly available data on greenhouse gas emissions and climate performance of the world’s largest corporations, plus emissions trading activities at the city-level and even the companies’ individual facilities. Leffel recently connected with researchers from the Data-Driven EnviroLab, which is at the forefront of this type of work, analyzing some of the largest global datasets of local climate action.

“We’re saying, let’s use a bigger microscope here and look at what really are the causal mechanisms for emissions reductions,” he adds.

Leffel notes that economic development tends to lead to more emissions, and most city leaders steadfastly push economic development in their areas because it increases local employment and income, as well as municipal tax revenues. How, then, do some cities manage to overcome these financial incentives and lower their emissions? Leffel aims to untangle the complicated factors at play.

So far, Leffel finds that access to climate mitigation expertise helps in two ways. One is city government memberships in environmentally-oriented international city networks. Another is the size of the local environmental consultancy industry, which suggests that local competition plays an additional role. On the other hand, participation in the carbon market shows little impact on emissions change, at least at the collective city-level data that Leffel is analyzing.

Leffel’s interest in global city governance stems from his time as a political science major at Otterbein University in Ohio, where he became fascinated by sub-national diplomacy and programs like “sister cities” which pair up cities in different countries for business and cultural exchanges.

After graduating, Leffel spent a year in China working for the Washington, D.C.-based International City/County Management Association before going on to earn a master’s in international affairs at American University. There, he conducted research on subnational diplomacy for the U.S. Department of State.

What drew Leffel to UCI’s School of Social Sciences was Smith, who is renowned for his work on global network analysis, environmental sociologist David Frank, as well as recognized experts in social network analysis including Carter Butts and Katherine Faust.

At UCI, Leffel set about mapping the largest yet "world city network,” showing how 22,311 world cities - major global economic hubs - are connected via 30,000 corporate linkages, such as having a factory or office of a major corporation. Leffel’s 2-D world map of the network was translated into a 3D animation by artist Kirell Benzi. After this, for his dissertation Leffel took on what he felt was the most important issue for world cities, and an equally data-driven task: climate change mitigation.

“Given the current political climate in which some world leaders seem reticent to take global warming seriously, figuring out how cities might take the lead in this is exciting, not only for urban studies scholars, but also as a way to potentially address this paramount world problem,” says Smith. 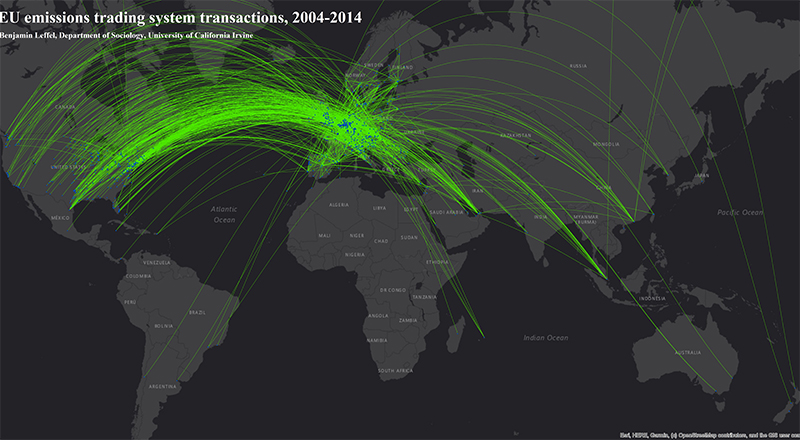 Irvine and UCI have a rich history in city-level activism around environmental issues, which makes a serendipitous addition to Leffel’s research.

In 1974, UCI chemistry professor F. Sherwood Rowland and graduate student Mario Molina discovered that CFCs harm the ozone layer that protects us from the sun’s harmful rays. The world was slow to respond, but in 1989—six years before Rowland and Molina won the Nobel Prize—leaders from 35 cities across the U.S. and Canada convened at Irvine’s Arnold and Mabel Beckman Center of the National Academies of Sciences and Engineering and spawned the International Council for Local Environmental Initiatives (ICLEI).

Irvine hosted this gathering of city leaders because it was a key player in the 1980s “municipal movement,” led by then-mayor Larry Agran and the Center for Innovative Diplomacy.

“The movement to ban CFCs actually succeeded and that earlier global crisis was averted,” says Smith. “Ben's work continues in this tradition, since he believes that cities can be crucial loci of policy to address climate change—and that the sorts of networks championed in Irvine thirty years ago can be a key part of a solution to that critical challenge.”

ICLEI persists today, in affiliation with the United Nations, with more than 1,750 local governments from 100 countries, focusing on helping cities address global sustainability issues at the local level. Since that time, multiple global environmental city networks like ICLEI emerged, and it is city government membership in these kind of networks that Leffel's dissertation finds is associated with successfully reducing urban emissions.

Leffel invokes Irvine's ICLEI legacy in his recent Orange County Register op-ed, calling for Irvine carry out a bold solar power transition to reduce its emissions and carry on its tradition of environmental innovation.

“I loved doing this stuff even before I knew about the history in Irvine,” says Leffel, who helped organize and archive the history of the Center for Innovative Diplomacy online.

“It’s a particularly wonderful sense of purpose, and my work coincides with a daily recognition of this history — that cities once before convened here, at Irvine, and that led to changes around the world.”

pictured: Leffel accounted for over half a million emissions trading transactions at the city-level worldwide