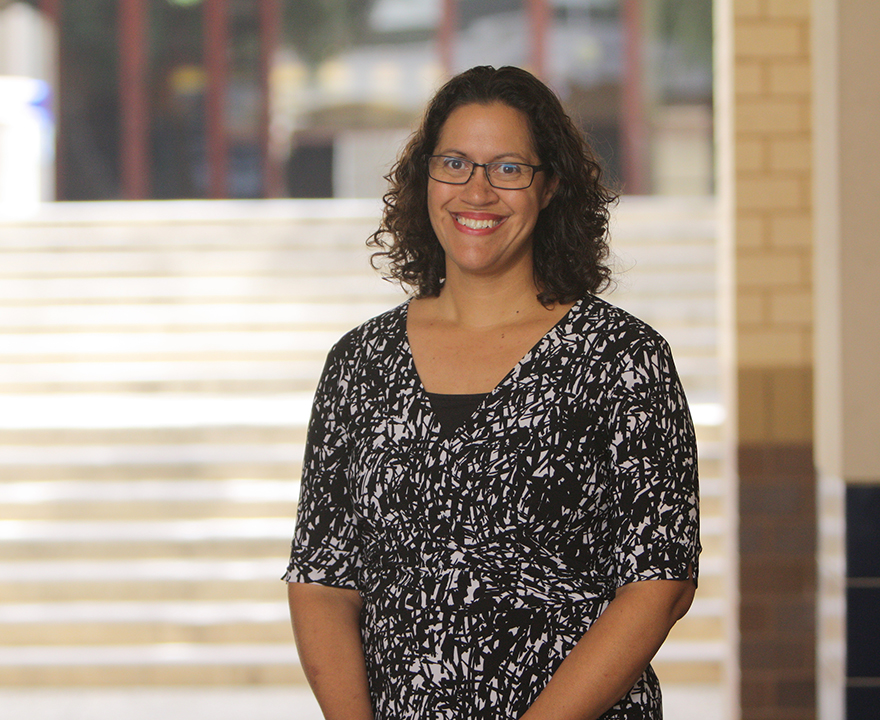 
Angela Jenks had planned to be a doctor. Growing up in rural Pennsylvania, her exposure to post-college career options had been somewhat limited to the traditional “doctor, lawyer, teacher” occupations she’d encountered in her small town up-bringing. Her first semester in college, she took “Introduction to Archaeology” admittedly on a whim, guided more by her interest in Indiana Jones – and a need to fill a general elective - than anything else. But like the big-screen hero often did, she ended up with a lot more than she’d bargained for.

“I instantly fell in love with anthropology,” says Jenks. “It gave me the foundation to answer questions that I didn’t know I even had, and now as a teacher, watching that same thing happen for my students is extremely rewarding.”

She combined her interests with a Ph.D. in medical anthropology, and now as an associate professor of teaching in the Department of Anthropology at UCI, she specializes in the study of disease, health and healing from a sociocultural perspective. Jenks was recently named UCI’s 2019-20 Academic Senate Early-Career Faculty Award for Teaching recipient, an honor that recognizes her as one of the campus’s top teachers. For Jenks, it’s validation that her redirect from an M.D. to a Ph.D. was well worth the risk.

“Anthropology is something that’s unfamiliar to most new students, like it was to me,” says Jenks. Students come into class – often taking a foray into the field to fill a required elective - with a pre-conceived notion of bones and stones or, sometimes still, Indiana Jones. These ideas are quickly upended when students begin digging into the way people and societies work – a core concept of sociocultural anthropology in which UCI specializes.

“Anthropology often gives students a different perspective on issues they’re already interested in,” she says. “Many of my students are also pre-med, and I want them to come out knowing how to connect what we discuss in class to life outside the classroom. Whether it’s better understanding people’s illness experiences or looking at medicine as a social and political system – anthropology provides a structure for thinking about the world from multiple perspectives that can be very meaningful for students.”

Jenks was hooked on anthropology after just one class. She scoured her university’s catalog for any and all related courses, and when she finished those, she set her sights on graduate school.

“I was fortunate to attend school as a Mellon Mays Undergraduate Fellowship Program scholar, which exposed me early on to the idea of earning an advanced degree,” she says. Backed by a program intent on increasing enrollment of underrepresented minority students in graduate school, Jenks applied and was accepted to the unique medical anthropology doctoral program offered jointly by UC Berkeley and UCSF.

She pursued research looking at the intersection of anthropology and medicine, examining efforts to improve the “cultural competence” of U.S. health care. She spent time in medical schools, managed care organizations, and hospitals, exploring the understandings of culture and race that are incorporated into efforts to address health disparities.

As a graduate student, Jenks - like many of her cohort- worked her way through school as a teaching assistant and adjunct instructor. The experience blossomed into something much more than an activity that paid the bills; she discovered a newfound love.

“I really enjoyed teaching and knew I wanted a career heavily focused on it,” she says. Her first job out of graduate school was as a tenure-track instructor with Los Angeles Southwest College. She spent four years at the community college, working closely with diverse students, including many minority and first-generation students with whom Jenks really connected.

When she was offered a lecturer position at UCI with the potential for security of employment – a role now known as a professor of teaching – she knew she’d be able to continue pursuing this mission. More than half of UCI’s students are the first in their family to go to college, and each year the campus admits increasingly higher numbers of transfer students. In 2018, more than 30 percent of UCI’s entering students transferred in from another institution, including many community colleges. Jenks welcomed the chance to continue to work with this population at a tier 1 research university and joined the anthropology faculty in 2013.

Since her arrival, you’d be hard-pressed to find a program she hasn’t been involved in, says Kim Fortun, UCI anthropology professor and department chair.

In the classroom, Jenks teaches roughly seven courses a year which primarily fill the medical anthropology minor, including Medical Anthropology; Anthropology of the Body; Cultures of Biomedicine; Disease, Health and Inequality; and Race, Gender and Science. She’s taught graduate courses in medical anthropology and one on pedagogy for future professors, and she’s taught courses for the UCI School of Medicine’s Program in Medical Education for the Latino Community (PRIME-LC). She also helped revamp the anthropology department’s honors program from a series of independent studies courses into seminars that allow students to meet and work together as a cohort under a faculty advisor.

“The new model provides a sense of community and gives students more support among themselves,” Jenks says.

She served for four years as the coordinator of anthropology’s master’s program in Medicine, Science, and Technology Studies and she taught the graduate program’s proseminar. She also served on the department’s Undergraduate Committee, which came under her directorship in 2018.

“This is an exceptionally high level of service for any faculty member and especially one with the teaching load Jenks has sustained,” says Fortun.

In what spare time Jenks manages to find, she also contributes to the broader field of anthropology via service work. In 2016, she was the scholar in residence for Cultural Anthropology, one of the field’s main academic journals. The journal’s rich online environment gave her a platform from which to publish nine teaching tool blog posts focused on everything from backwards course design, to pieces on why students don’t read and how new teachers can develop a standout statement of teaching philosophy.

“As much as I love teaching, there are challenges that come with it, one being a need for more community around it. There aren’t many forums for exchanging ideas outside of the groups we each form,” she said.

So that’s what she tackled next with the launch of the online open access Teaching and Learning Anthropology journal for which she serves as editor in chief. With two issues out already, she and the editorial team are beefing up the online infrastructure for sharing resources – articles, films, digital materials, syllabi and more -with teachers who can also then exchange important ideas, reflections and support.

Her work earned her recognition last year as a Provost's Teaching Fellow during which time she worked with graduate student Katie Cox to develop a learning community for social sciences faculty and teaching assistants and contributed her knowledge as part of the Active Learning Institute. With the Academic Senate Teaching Award, Jenks’s efforts are again lauded. But the real excitement for her comes in the classroom and from applying her anthropological training to teaching.

“I love trying to find ways to help students apply what they’re learning, and that comes from my own belief that anthropology has something important to contribute,” she says. For her, an introductory anthropology course provided an eye-opening experience and a new trajectory in a career she never knew existed. And she hopes to engage in her students the same possibility.

“When students study issues like health disparities and understand the structural inequities that lead to early death, they know how to better be involved in creating change,” she says. “Some of my students have done course projects where they join community advocacy groups, work with foodbanks like at UCI, or write policy petitions. Anthropology teaches us to focus on why things happen and find steps we can take to address these giant and overwhelming problems. And that gives me hope.”