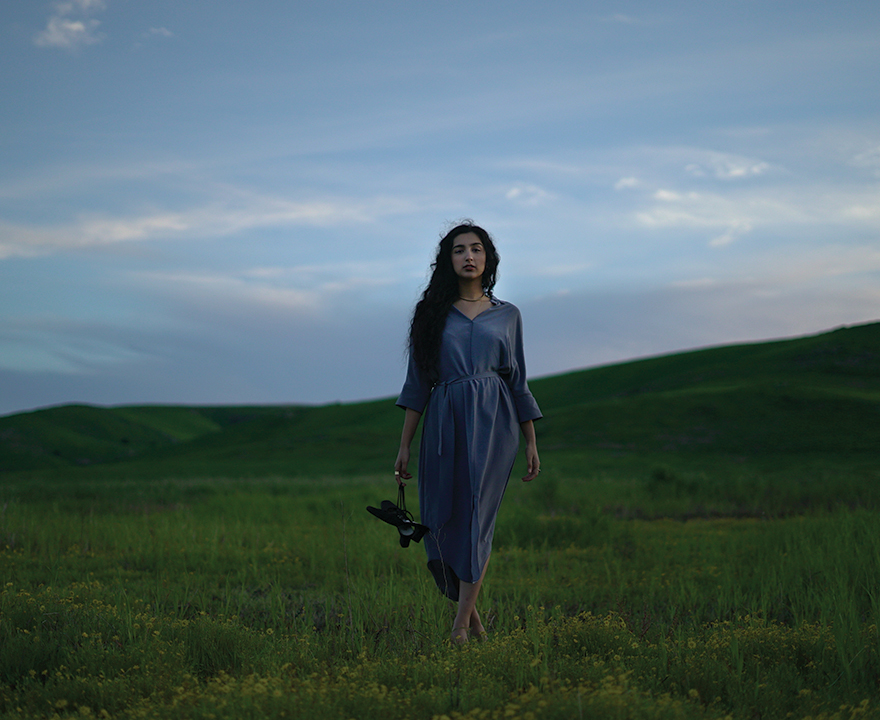 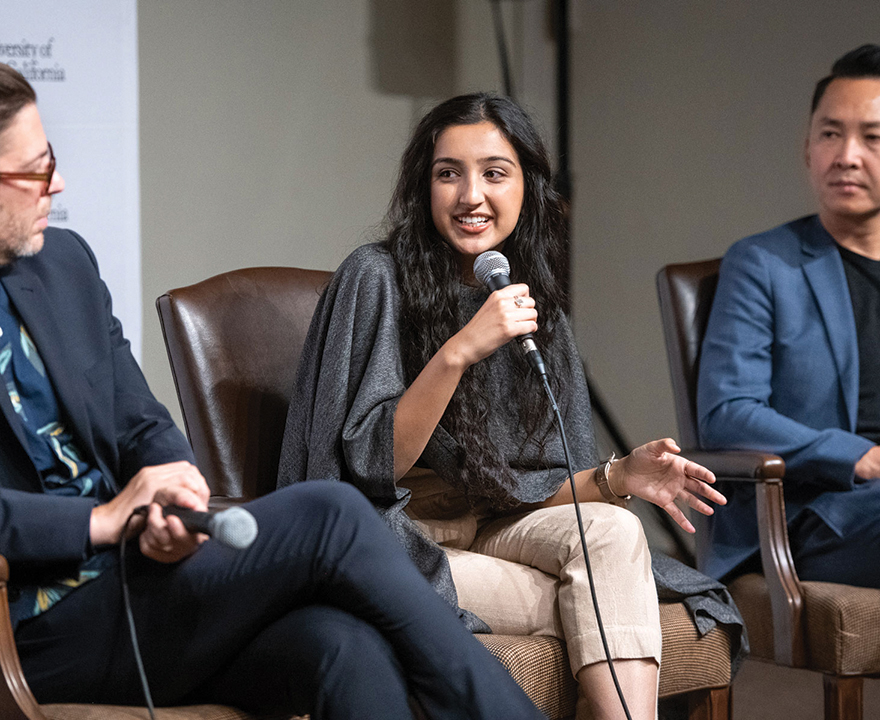 For UCI senior Aditi Mayer, the act of storytelling has been essential to her academic journey. She’s majoring in both international studies and literary journalism, and the way she sees it, these disciplines go hand in hand.

“How can we address problems if we don’t see them face-to-face?” she asks. “You’re often told in journalism that you can’t be a journalist and an activist. However, I’ve never believed the politics of objectivity as much as I’ve believed in a movement toward transparency. I’m conscious of the voices I’d like to amplify through my work.”

Her desire to see issues “face-to-face” has taken her across the globe. She’s been to La Paz, Mexico where she studied gentrification and teenage pregnancy as a fellow with UCI’s Blum Center for Poverty Alleviation. She’s been to Rome under a UCLA Travel Correspondent scholarship, and to Dhading, Nepal where she documented an all-women farming community composed of survivors of domestic abuse. Within the U.S., she has traveled to the San Francisco Bay Area, Chicago, and parts of the American South to study race relations as part as UCI’s Deconstructing Diversity Initiative.

“She’s able to engage people in ways that aren’t typical. Her deep concern for the well-being of others coupled with her warm and welcoming nature enables her to facilitate dialogue and deep analysis about topics people might ordinarily shy away from. She’s been able to apply this skill beyond the classroom to her own work,” says social sciences lecturer and Deconstructing Diversity Initiative director, Teresa Neighbors.

Mayer refers to her quest for opportunities to learn outside of the classroom as an “obsession.”

One of Mayer’s proudest moments at UCI has been seeing the impact InSight Magazine, the student-run digital and print magazine she founded, has made. InSight Magazine explores poverty and inequality in Southern California and was partly established on funding Mayer secured herself.

“She has a vision of what she wants from her university experience and is able to execute it in a way that very few students do. She comes up with ideas that are compelling, exciting, and that people want to support. She’s extremely self-motivated and independent in ways I haven’t seen in twenty years of teaching,” says urban planning and public policy professor Richard Matthew. Matthew, who also serves on the board of directors of InSight Magazine and is the director of the Blum Center which incubates it, says getting InSight up and running took an extraordinary amount of work on Mayer’s part. In addition to finding funding, she hired over 30 staff. “It was a great success. She’s great at networking, bringing people together, and getting things done,” he says.

The first issue, which launched last spring, included features on human trafficking in Anaheim and an undocumented adult film star. “It’s one thing to have an interesting perspective on the world, but it’s another to have the tools and the will to take action,” says literary journalism lecturer Amy DePaul. 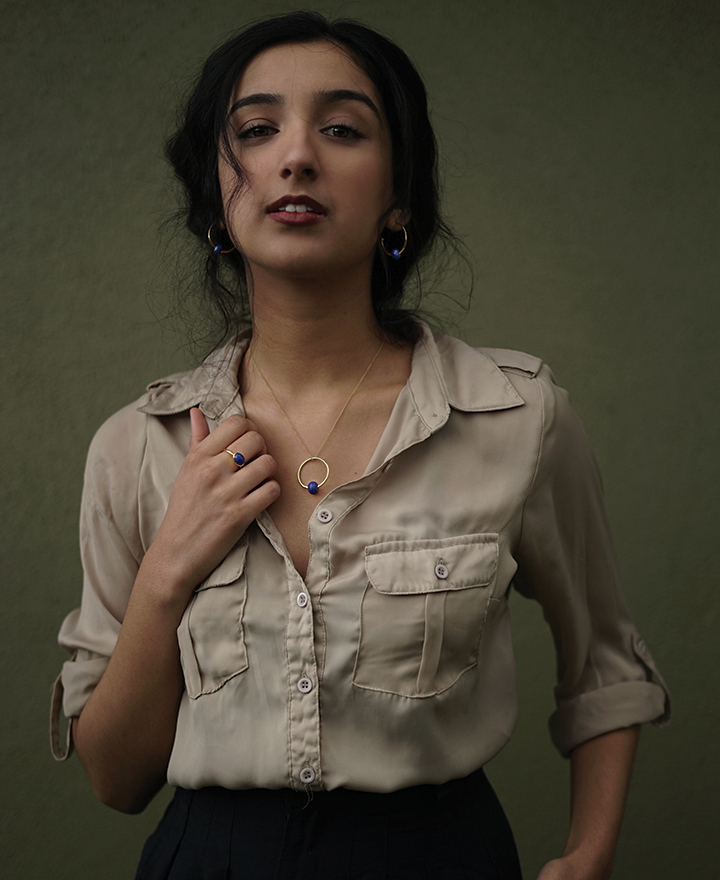 Around the time Mayer arrived at UC Irvine as a freshman, she created a blog (ADIMAY.com) that explores ties between style, sustainability, and social justice.

As her following grew (she currently has about 20,000 followers), so did the opportunities. She has never marketed herself as a public speaker, but over the past couple of years, she has become a frequent speaker on social justice, minority representation, and cultural appropriation in the fashion industry. After her first invitation to speak, the requests have had a bit of a domino effect. In November, she was a panelist at an event at the USC Pacific Asia Museum with Pulitzer Prize winner Viet Thanh Nguygen. ADIMAY.com has gathered enough of a following that clients, such as the Metropolitan Museum of Art, now pitch her ideas for sponsored content.

While curiosity is certainly a motivator behind Mayer’s academic and extracurricular pursuits, the goal to take care of her family as a first-generation, low-income student is also something that motivates her.

“There’s a high standard I hold myself to as I’d like to be the financial anchor for my family - and I think that’s a sentiment shared by many children of immigrants with backgrounds similar to mine,” she says. “At first, I had to get used to the idea of mentorship and to the idea of asking for help. I thought I had to figure everything out on my own. Despite the large class sizes, there are so many professors at UCI who are willing to be there for you. There’s a community out there to help you. Seek this community out.”

Mayer took her last final in March. She plans to continue to support herself with the money she earns from speaking engagements and sponsored content on her blog. She’s wrapping up a documentary she made about Punjabi-Indian fashion designer Mohanjeet funded by grants she received from UCI’s undergraduate research programs. She plans to continue working on a long-term photojournalism project about undocumented garment workers in Los Angeles.

As Mayer gets ready to graduate, she reflects on her personal and academic journey.

“UCI has helped me develop my own story. My growth as an individual and creative is tied to the opportunities granted by UCI. Like many, college was a political coming of age for me. UCI gave me the tools to talk about the issues that were really important to me and figure out what I could do about it.”

Whatever is next, there’s no doubt Aditi Mayer will have a story others will want to follow.

Pictured right top to bottom: Through activism, Aditi Mayer has become a frequent speaker on social justice, minority representation, and cultural appropriation in the fashion industry including participation in a panel discussion at the USC Pacific Asia Museum in Pasadena.  Aditi Mayer wearing the Met Store’s Roman Bead Collection as part of a sponsored post for her blog, ADIMAY.com.