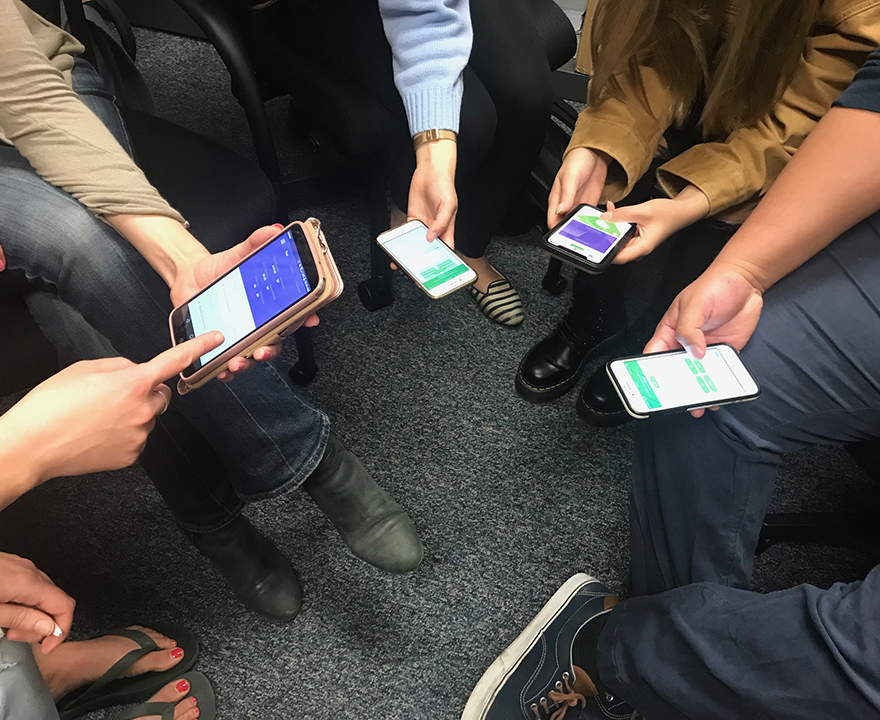 As Kristin Wong, personal finance journalist, wrote in the New York Times, “Many of us grow up learning that money is one of a few topics — like politics, sex and religion — that you should avoid in polite company. You don’t brag about your net worth. You don’t share your salary with colleagues. You try not to ask your friends about their rent, even if it helps put your budget in perspective.”

April is Financial Literacy Month, and it so happens researchers in the School of Social Sciences have been asking whether new smartphone apps are actually teaching people about better financial habits.

Without a trusted resource to learn about financial literacy people often feel overwhelmed by budgeting, debt management, and trying to meet savings goals. The Federal Reserve Board's 2018 Report on the Economic Well-Being of U.S. Households found that 40 percent of Americans say they cannot cover a $400 emergency expense, or would do so by borrowing or selling something.

Those who are interested in managing their personal finances often turn to apps and robo-advisors from financial technology companies, commonly called fintechs. Popular apps, such as Mint, claim to help users learn about budgeting and establishing personal financial goals. Since 2008 the number of new fintech companies in the US, and around the world, has soared.

DECIPHERING THE ROLE OF FINTECH

Building on a rich portfolio of research on how people interact with money and financial technology, the Institute for Money, Technology and Financial Inclusion (IMTFI) and the Filene Center of Excellence in Emerging Technology at UC Irvine conducted a study to dig deeper into fintech apps, the experiences they offer, and how users respond to them.

“With the unbundling of banks, there are a lot of fintech companies popping up and taking on roles traditionally held by banks. Many are providing personal financial advice through these new technologies, but we know very little about actual user interactions with them,” says Melissa K. Wrapp, a graduate student in the Department of Anthropology at UC Irvine. “An app on a phone to budget or invest can be tremendously helpful, but you also have to be wary of what other information or sales motives could be imbedded within apps.”

Wrapp works as a researcher for Bill Maurer, anthropology and law professor and dean of the School of Social Sciences at UC Irvine. He’s also a Filene Fellow who performs research for the Center for Emerging Technology to look far into the future to connect credit unions with the most impactful technology and drive forward-thinking business decisions.

“It’s important to understand how people use these apps because we just don’t know if they encourage better financial behavior or lead people down the wrong path,” says Maurer. “My hypothesis going in was that these apps are almost like training wheels—and that people would graduate from them after a time and seek financial advice from more traditional sources like a bank or credit union.”

PUTTING FINTECH APPS TO THE TEST

In a pilot study, twenty-seven participants used one of five fintech apps for 30 days and reported their experiences. Some apps were personal budgeting apps and others were for investment management. The group included UC Irvine undergraduates, graduate students, and staff. Several participants were completely new to financial management apps, while others had some previous experience with fintech apps.

"We started the project with preliminary interviews, then held a focus group half way through the study to see how the experience of using the app was going," Wrapp says. "During the exit interviews, many participants mentioned that the focus group conversations were as valuable to them as using the app itself because, for many, it was the first conversation they've ever had with people about how to manage their personal finances."

While many participants indicated that they are now actively seeking out more personal financial education, Maurer and Wrapp will be presenting the complete research results at the Center for Emerging Technology and Filene's Spring i3 "The Future of Trust: How Technology Will Make it or Break it for your Credit Union" meeting in Seattle, WA on May 29-30. Their discussion will examine behavior and patterns of younger consumers’ use of financial apps to manage their money, and how credit unions can identify best practices to shape their own mobile apps.