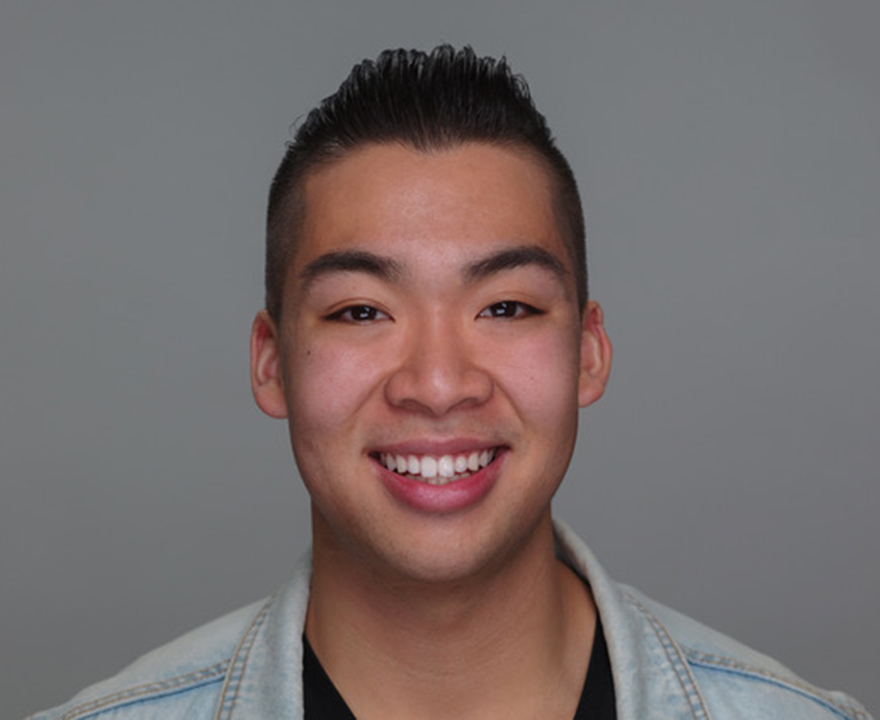 
Germain Louie may be the only former Starbucks barista whose choice of drink is pure black coffee. Though the chain is known for its fancy and sometimes complicated coffee-based drinks, Louie became an advocate of drinking coffee black in his time working as a barista while completing his degree at UC Irvine. He enjoyed educating fellow employees as well as customers on the various flavor notes that can be experienced with different varietals, unencumbered by add-ins.

And as a business economics major, political science minor, and active Anteater, Louie’s love of coffee gave him a much-needed caffeinated boost in everything from his work as a LinkedIn Campus Editor, Canva Certified Creative Ambassador, and Student Life and Leadership workshop organizer to being a core member of UCI’s powerlifting club and involvement in Alpha Kappa Psi. He describes his experiences at UC Irvine with great enthusiasm, and reflects on them below as graduation approaches.

For Louie, UCI faculty have been instrumental in providing guidance and direction. As a freshman, Louie found himself in a Humanities Core class taught by Kristina Shull. He says that this course, along with the input and guidance from Shull, was critical in shaping his future at UCI. For Shull, the admiration was mutual.

“As a first-year Humanities Core student of mine... Germain was already an incredibly gifted thinker and writer,” she says. “He enthusiastically made conceptual and personal connections beyond the classroom, driven by a unique kindness and concern for social justice. I am most struck by his positivity and adaptability.”

However, his involvement has gone far beyond academics. When he was a sophomore, Louie joined UCI Powerlifting, which he describes as a “monumental life change.” As a result of the club and the friendships he formed there, Louie ultimately lost seventy pounds and changed his entire perspective on health, wellness, and balance. He is also a self-described “huge foodie” and loves to cook.

Additionally, Louie took advantage of UCI’s study abroad program and spent the spring semester of his junior year at Queen Mary University in London. He describes the experience as transformative, and saw it as another opportunity to take a leadership role. He then became a Study Abroad Peer Mentor, which has allowed him to help other students narrow down and maximize their study abroad experiences.

“The best part of the job is being able to interact one-on-one with students to understand their desires and challenges to better identify their dream program,” he says. “Eventually, their dream becomes a reality!”

While studying abroad, Louie enjoyed created compelling content on LinkedIn about his experience, as well as business-related topics. Upon his return to the States, he applied for and was accepted as a Campus Editor for LinkedIn. This role allowed him to expand his student and professional network, which then led to him becoming a LinkedIn Local OC Co-Founder and Host. He is involved with hosting local business gatherings to connect students and local business professionals. Additionally, he was asked to become a Canva Certified Creative Ambassador, helping people understand and utilize Canva as a valued platform for messaging. He sees platforms such as LinkedIn and Canva as being critical in leveraging technology to create connections and deliver messaging.

As he nears the end of his college career, Louie can look back and see how his involvement on campus has shaped his collegiate experience. However, that doesn’t mean that Louie’s path at UCI has been an easy one with a clear destination.

He explains that in his first years at UCI, he was turned away from two different professional fraternities - organizations which he thought would be a major part of his college experience. Though these rejections were personally painful, they also seemed to focus his efforts and provide motivation.

“I wasn’t going to let these experiences define me. I told myself I would take control and ownership in everything I chose to get myself involved with,” he says. Ultimately, Louie joined Alpha Kappa Psi, which has been a very beneficial experience.

Louie then channeled his energies into taking on professional leadership roles on campus. These included working with the office of Student Life and Leadership to on the recent Anteater Leadership Summit, which was held January 29. Louie crafted the Professional Development Track to address gaps in resources for students and to connect them with local professionals. The event had over 130 students and many local business professionals in attendance.

Andrea Reyes, Leadership Programs Coordinator at the Center for Student Leadership, was particularly impressed with the role that Louie played in the success of the Summit. “Germain took lead in our ‘Professional Development Track’ which he coordinated on his own. This track was one of the highlights from the summit,” she says.

The Importance of Mentorship

Throughout his life, Louie has benefitted from the value of community and mentorship, and is clearly intent on giving back in serving as a mentor for others. He also believes that mentorship should not be restricted to business: he states that various individuals have influenced his life in personal development, health and fitness, and more. In speaking about mentorship, he says that people should reach out more, and technology makes it easier to do so. “People are willing to help you - it’s a matter of reaching out and asking for that help,” he says.

Some of the mentor relationships from which he has benefited go well beyond campus. Louie has carefully crafted relationships with business professionals who have knowledge to share. One of these mentors is Tim Salau, AI Product Manager at Microsoft in Seattle.

"Germain's passion for community building and lifting others up exudes in all that he does,” Salau says. “I honestly wish I was half the leader he is when I was in college. Leadership is a unique characteristic that is hard to master; as a mentor who has witnessed Germain's growth these past two years, he's absolutely ahead of the curve."

What Gen Z Wants from Employers

When asked what he would like to do in the future, Louie says he’s most interested in organizations that foster collaboration between generations, departments, and pay grades. He and his peers are interested in working somewhere where “you’re able to collaborate - you’re able to connect with like-minded individuals who can continue to help you grow, not just in your field but in other fields of interest.”

Louie adds that when job searching, a prime motivator for his generation is the ability to have an impact within the corporation itself, and that stagnant, compartmentalized organizations are not appealing. He believes that his generation - Gen Z - will be change agents for business, corporate culture, social media, and society. Citing recent events such as the Google walkout, he sees his generation as willing to take a stand against corporate irresponsibility.

Louie is eager to see his generation develop new technologies while leveraging their benefits for the greater good. He says that Gen Z’s ravenous consumption of knowledge - through podcasts, e-learning, books, and more - provides a path forward in finding ways to share that information for societal advancement.

Having seen both the good and bad sides of technology, Louie is quick to identify its positive attributes, such as the ability to connect people and create accessibility. However, he is also notably wary of the impact that media - particularly social media - can have on mental health. He cites burnout, imposter syndrome, and recent events such as the failed Fyre Festival as ways in which injudicious consumption of media can have intensely negative results. Ultimately, Louie believes in the power of technology for good and looks forward to a career in which he utilizes technology for social advancement and shared learning.

From coffee connoisseur to community connector, it is clear that Louie has big plans, both for himself as well as his generation. The common thread amongst Louie’s “passion projects” has been connection. In looking forward, Louie is eagerly anticipating moving on to the next stage of his life, but is also striving to embrace his last few months of college. It’s apparent in speaking with him that Louie has given careful consideration to his path in life, and that blending passion and purpose is an ongoing practice for him.

When asked what impact he hopes to someday have, he responds that he would like to “foster a community where there is an infinite amount of value for individuals to live a better life.” One would have to work hard to find a purpose finer than this.

-Kara Roberts for the UCI School of Social Sciences