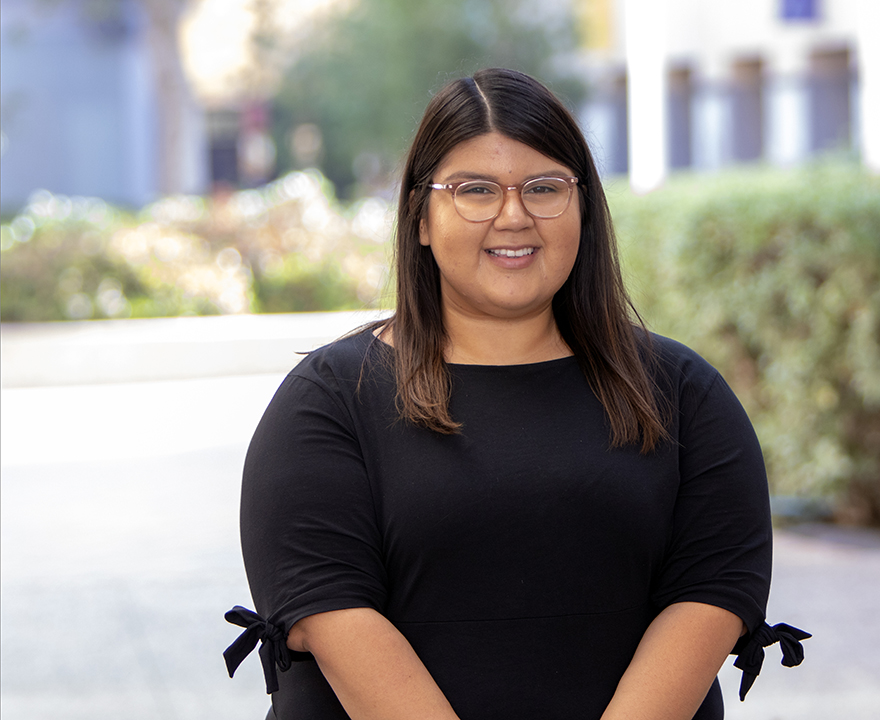 
Janet Muñiz has seen Santa Ana change a lot since childhood. The downtown area, once better known as a residential and commercial hub for Latino immigrants, is now host to a slew of hipster-attracting bars, restaurants, art galleries, and studios.

Muñiz, a fifth-year Ph.D. student in the Department of Sociology, studies second-generation Latino entrepreneurs and how their ethnic identity is expressed though their business practices and involvement in the community. She’s interested in how ethnic identity remains alive through generations and how this manifests in public space.

Muñiz has focused her work to the downtown Santa Ana area.

“The first generation of business owners opened quinceañera and religious iconography stores, but now we’re seeing a generational shift. The second generation, many who left to attend college, are now compelled to return and own a business in Santa Ana,” she says.

According to Muñiz, “What this illustrates is how entrepreneurs’ practices on the ground play a largely unappreciated role as access points to resources through their products, services, outreach. As a result, this can influence the salience of ethnicity in the community and shape the ethnic identity formation among their customers. We can use this as a framework to then understand how this can take place in other similar communities undergoing these generational shifts, such as Little Saigon.”

Muñiz is the latest recipient of the Outstanding Research Award in the Department of Sociology. She was not only recognized for her work on her dissertation project, but for her contribution to associate professor Kristin Turney’s jail and family life study.

In addition to carrying out her own fieldwork, Muñiz has conducted over a hundred interviews with incarcerated fathers and their families throughout Southern California for Turney’s large-scale study.

“Janet is such a friendly, warm, down-to-earth person. People feel comfortable talking to her. She’s been able to get respondents to trust, not only her, but the research process as a whole,” says Turney.

In addition to conducting such a large number of interviews (each interview lasts anywhere from two to six hours), Muñiz has supervised undergraduates, trained new interviewers, and developed a codebook for categorizing the content of the interviews.

“You know how people say if you want something done, give it to a busy person, well that’s Janet to a T,” says Turney.

When Turney first approached Muñiz about assisting with her study, Muñiz jumped at the chance.

“Qualitative research is so independent. There’s not a lot of opportunity for collaboration. There was no way I could pass that up,” Muñiz says.

Soon, Muñiz will use data from Turney’s study to write her own paper on incarcerated fathers’ participation in the informal economy. Her project is supported by a multi-year $60,000 Mentoring Grant for Junior Researchers of Color from the William T. Grant Foundation that she received with Turney.

Pursuing a Ph.D. was not always on Muñiz’s radar.

“Even by my senior year at UCSB, I wasn’t really thinking about what I was going to do after graduation. I was a transfer student and I was still concerned with landing on my feet, doing well in my classes, and graduating,” she says.

But then, she got to know some of her TA’s through her classes and a Chicana feminist group on campus and learned about what they did as graduate students.

“I was really intrigued that I could study something that was important and relevant to me. I liked that I could study people from my community and try to make sense of everyday cultural practices. People don’t usually question why they do what they do. I wanted to find out why,” she says.

The graduate students she befriended at UC Santa Barbara not only inspired her, but served as powerful mentors. As an undergraduate, Muñiz assisted with one of her graduate student mentor’s fieldwork.

“I found it super fascinating. Being able to see dissertation research firsthand really helped demystify the process,” she says.

After graduating from UCSB with a B.A. in feminist studies, Muñiz earned an M.A. in cultural studies from Claremont Graduate University. During the summer between her first and second year of her master’s program, Muñiz participated in the Summer Undergraduate Research Fellowship (SURF), an intensive six-week program at UC Irvine where she was able to gain research experience and attend workshops about the graduate school application process.

“The program really prepared me for applying to grad programs,” she says.

When the time came for Muñiz to apply to Ph.D. programs, UCI’s sociology graduate program was one of the programs at the top of her list. She was drawn to the faculty expertise in immigration and the department’s interdisciplinary culture.

While Muñiz’s research focuses on people who have returned to the area where they were raised, she experienced her own homecoming of sorts. Last summer, she served as a mentor for SURF, the program that was instrumental in her own academic career.

“I like that I’ve had the opportunity to give back,” she says and notes that serving as a SURF mentor has been one of the most meaningful experiences she’s had on campus.

Muñiz has also been able to forge a community through her involvement with UCI’s Chicano/Latino Graduate Student Collective.

“The group tries to build a community amongst grad students in whatever way is needed. It might be a barbecue or providing feedback on a paper or just meeting at a coffee shop to work,” she says.

Muñiz appreciates how the “Collective” provides a sounding board. She’s a first generation college student and though her family has always been supportive, discussions around her academic pursuits sometimes require a little justification.

“My family thinks I’ve been in school forever. They’ll ask me, ‘You’re still in school? Didn’t you already graduate?’ Or when they ask if I have work tomorrow, I have to explain that while I don’t technically have to be somewhere, I can always be working,” she says.

It’s no surprise that someone fascinated by what shapes a community, is so adept at fostering and giving back to one. In another reversal of roles, Muñiz is now the graduate student offering advice to undergraduates. This year, she’s teaching a class at Cal Poly Pomona on how to conduct qualitative research.

“I tell my students to make sure they’re not pursuing research because it’s a hot topic, but because it’s something they’re really passionate about and aligns with their values. If they choose to pursue it, their research just won’t be their dissertation, but hopefully their first book, and then their career and their livelihood. Your research isn’t just a job, but your academic identity,” she says.