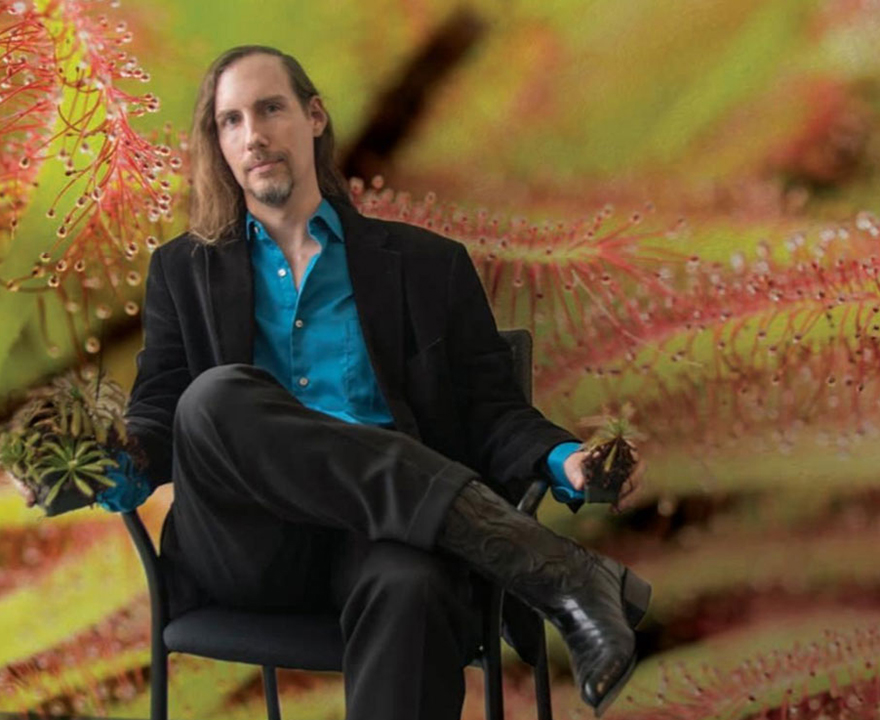 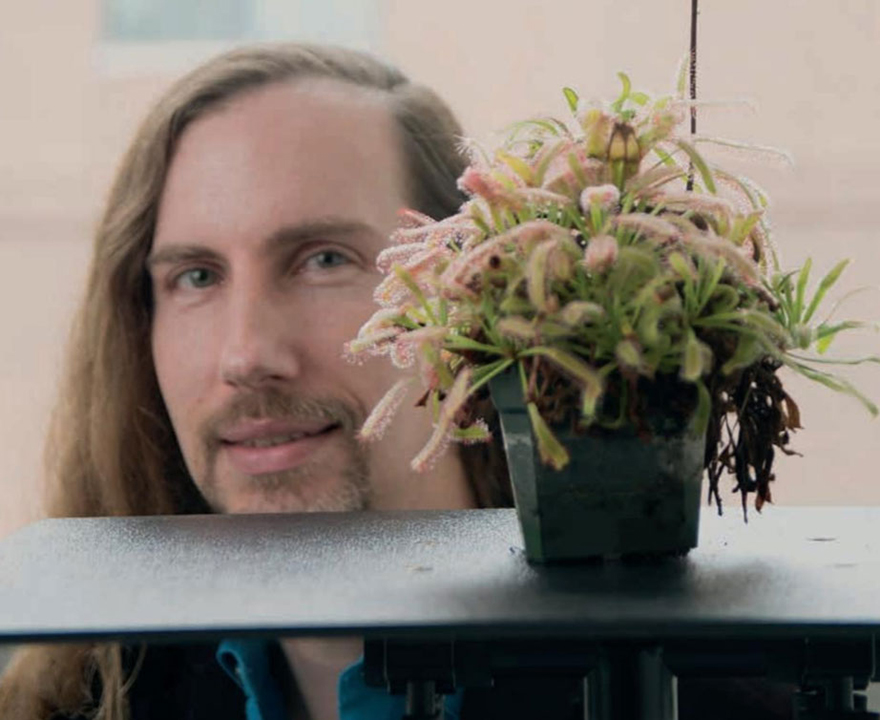 Most people struggle mightily to see any similarities in biology and sociology, or understand parallels between economics and electrical engineering. Carter Butts is not most people. The UC Irvine sociology professor models complex systems in divergent arenas, seeking comparisons that can help solve difficult problems.

If that seems esoteric, it’s anything but to Butts. His unparalleled enthusiasm, coupled with an outright joy at diving headfirst into uncharted territory, has opened doors to a dizzying array of seemingly unrelated projects.

The articulate, personable professor has analyzed communication networks in a presidential election, noting important episodic patterns. He has examined proteins as they form new structures, leading to insight about Alzheimer’s disease and diabetes. He has graphed online social networks and the transmission of sexual diseases, and he has analyzed the role Twitter plays in emergency management.

His most recent coup: sequencing and studying the genome of a carnivorous plant called Drosera capensis, the cape sundew, with his wife, Rachel Martin, a UCI chemistry professor. Their findings could yield improvements in biomedical tools and the fight against infection.

“If you understand how one system works, you can leverage that to understand another,” he says. “There are unifying principles you can exploit.”

Growing up in North Carolina in a blended family – his parents and stepparents included a psychiatrist, an engineer, a forensic pathologist and an accountant – Butts always knew he would be a scientist. “What kind of scientist was much more up for grabs,” he says.

He was captivated by computers, first a Sinclair ZX80 and later a Timex Sinclair 1000 with 1KB of RAM, which Butts wryly describes as “hot stuff at the time.” Then came the family’s first IBM personal computer, and the young scientist was formally hooked. “That was the first machine I could really do something with; I spent hours and hours on that thing.” He learned to program, saved his allowance to buy new hardware, and reveled in computer camp.

Butts thrives on demolishing academic silos. Even as a freshman at Duke University, he refused to be constrained by traditional boundaries. Instead of majoring in computer science as he originally had intended, he designed his own interdisciplinary major.

“This was a period where there was a tremendous explosion of work in simulation methodology but more broadly in the idea of trying to use ideas from one part of science to understand difficult problems and complex systems in other parts of science,” Butts says. “I was very taken with that idea.”

He graduated in 1996 and headed to graduate school in mathematical sociology at Carnegie Mellon University, which he describes as “a real hotbed of intellectual activity around networks.”

Sporting waist-length hair, a goatee and a sharp wit, Butts is no shrinking violet. “I like a certain amount of flash,” he says. “Go big or go home.”

He channeled that philosophy as a grad student, writing and developing a software package that integrated network analysis into other types of statistical analyses. The idea, considered “heretical” when he started, became the root of a broadly used open-source software system called statnet, which analyzes, simulates and visualizes network data.

“There was a division between statistical methodology and network methodology. The mantra was that you couldn’t use standard statistical tools and techniques on networks, but I was interested in pulling those two things together,” he says.

Butts joined the UCI faculty in 2002. He began analyzing very early blogs devoted to the Iraq war, seeking clues to their political influence. He lacked resources, but convinced undergraduates to save pages from websites by hand because “it seemed like this was an important social moment.” That effort informed his next big challenge, analyzing network structure in the 2004 presidential election. This was the first time that the nascent blogosphere had become an important media resource, and Butts says he still publishes on the results of that study. “This was really the first time we were able to see networks flexing and changing throughout the day and the week.”

One of his largest-scale endeavors was participation in a $12.5 million NSF project called ResCUE. The five-year project brought together computer scientists, engineers, social scientists and disaster science experts to transform first responders’ ability to gather and disseminate information after large-scale emergencies.

Butts also led the first study of interpersonal communication networks in an unfolding disaster. Utilizing radio communications transcripts from the 2001 World Trade Center disaster, his group coded time-stamped communications from 17 different responders into a dynamic network. To analyze this data, Butts had to develop a new family of statistical models that could handle the complications of observational data on complex interactions driven by many factors at once. This new approach, called the relational event framework, has since been widely used by researchers worldwide to conduct their own studies.

“It’s incredible; it has been really rewarding,” Butts says of that success. “It was a technical achievement but at the end of the day, we did it because we needed to solve a problem.”

He believes his software tools are among his greatest accomplishments. “They have probably made the most difference out there in the world, because they have enabled others to do thousands of studies of all sorts of things. That’s pretty cool.”

Butts began analyzing social media networks, specifically Twitter, after teaming up with a researcher named Jeannette Sutton who met Butts while working on the ResCUE project as a University of Colorado postdoctoral researcher. Sutton pulled Butts aside at a meeting and said, ‘”Look, there’s this thing called Twitter, and emergency managers are going gaga over it,” he remembers.

Butts was skeptical. “I had heard of Twitter but it seemed like a very pointless technology, which was not very interesting and didn’t seem to be going anywhere.” But Sutton convinced him to write an NSF grant with her, a proposal to use Twitter to study the online rumor mill. “I was terrified that Twitter was going to fold before the grant was over and we wouldn’t have any data,” Butts laughs. The study yielded a groundbreaking way to measure informal communication in real time during a disaster.

The two have continued to work together for more than a decade. “He is the ‘man behind the curtain,’ who does the necessary computation,” Sutton says.  “His depth of knowledge is incredible, and I can say with certainty that his colleagues from the social network analysis community have described him as a ‘young genius.’ He leaves no stone unturned when considering various approaches to problems that we are investigating.”

Early on, however, not everyone in his intellectual circle had the same admiration. Butts remembers attending a session on blogs and email networks at a prominent network conference when he was a junior faculty member. Several of the more seasoned faculty in attendance were less than impressed that the subject was even under discussion. “They weren’t aware that I had a paper in the session, and they were grousing. ‘Blogs? Email networks? This is junk; what are these kids doing?’ They couldn’t see why this was important or why anyone would even care about any of it.”

He adds, in typically droll fashion, “And I’m just thinking, well, the longer you think that way, the more time I have to publish.”

In addition to his primary appointment in sociology, Butts flexes his interdisciplinary muscles on a daily basis with courtesy appointments in statistics, electrical engineering and computer science, and mathematical behavioral sciences.

CALIT2 became his home away from home during his early days with ResCUE, and it’s still the site of most of his meetings, as well as his Networks, Computation, and Social Dynamics Laboratory, part of the Center for Networks and Relational Analysis.

“We at CALIT2 are about trying to bring ideas together across many different intellectual domains,” he says. “That’s why the connection has always jelled and why I wound up making a home here. It would be very hard for me to do what I do if we didn’t have this infrastructure in place.”

UCI engineering professor Athina Markopoulou, a longtime Butts collaborator, calls him “a unique asset for UCI and especially for CALIT2. She cites the depth and breadth of his expertise. “He is a polymath who does not shy away from attacking problems in different fields,” Markopoulou says. “And he combines a strong, energetic and outspoken personality with thoughtfulness, kindness and humor.”

As one would expect, his lab group includes graduate students from multiple disciplines. “When we sit around the table, the research – whether it’s Twitter, or proteins or sexual contact networks or a bombing – whatever it is, is being evaluated by a group that’s got sociologists and statisticians and computer scientists and engineers and physical scientists. They’re all coming to these problems with different points of view but they’re all talking to each other and building common ground,” Butts says proudly.

Zack Almquist, an assistant professor of sociology and statistics at the University of Minnesota, was one of his students. “Carter is a fantastic mentor who is always looking to grow and develop his students – and as importantly, to train them as future leaders in the field,” Almquist says. “He has a deep passion for understanding the social (and physical) world and a great ability to make anything engaging – from chemical bonds to human connections. I think his dedication to truth and his careful, exacting nature make you realize how important the small details are and how they build up to the larger research goals.”

Not one to leave his work at the office, Butts exemplifies intellectual curiosity. When asked what he likes to do in his spare time, he answers, “Science. My hobby is science. I just do other science from what I’m supposed to be working on.”

He and his wife started their Drosera capensis genome project during their winter break a couple of years ago. “We were going to have a genome vacation,” Butts says. “Okay, it took a little longer than that, but we did it. That was a really exciting personal accomplishment. But it was also this great adventure because I had never done anything like it.”

The two continued their adventure, traveling to South Africa last summer on a carnivorous plant expedition. They cultivate nearly 500 carnivorous plants at their Irvine home but wanted to see the flora in its native environment. Braving wind, rain and a steep mountainside, they hunted a rare plant called Drosera regia, which grows only in two places worldwide. “It was very exciting …,” Butts says. “You don’t get to see something that rare and endangered every day.”

Seemingly surprised that some would consider uncommon his ´round-the-clock pursuit of academic interests, Butts clarifies. “You know, I always try to learn things. You always have to be looking to learn and expand your knowledge because you never know what you’re going to need to know next.”