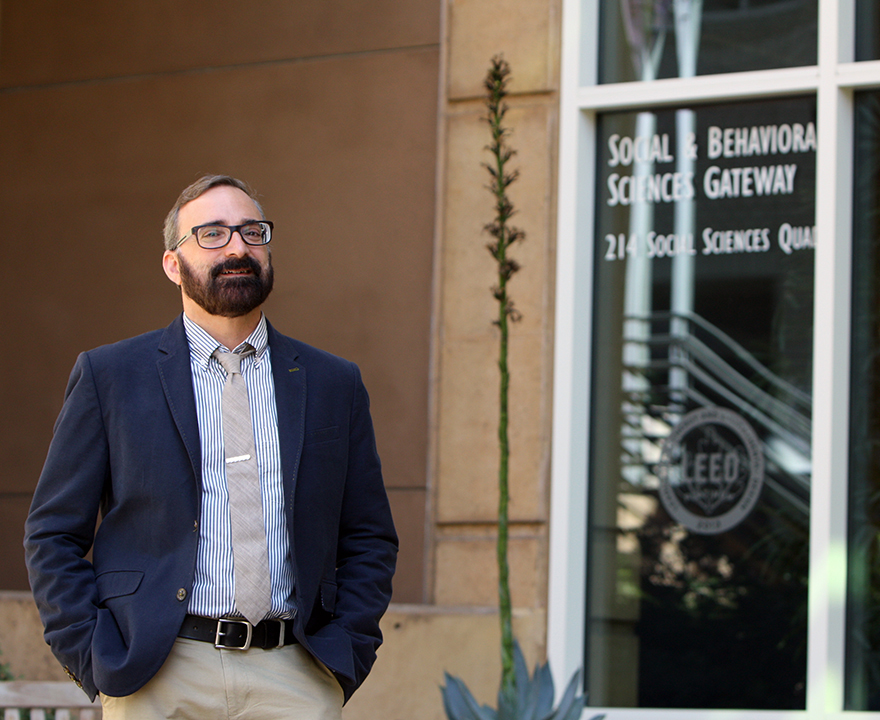 We’ve had a whirlwind summer and it’s hard to believe we’re almost into the start of fall quarter. This time of year is always my favorite; seeing the excited faces of our new freshmen, transfer and graduate students - many of whom are the first in their family to go to college – reminds me of the important role we play as university professors in shaping our future generation of leaders.

This year, we’re welcoming in 1,842 new undergraduates  – nearly 20% of the total new undergrad Anteaters on campus – and they come from a record-setting pool of over 104,000 UCI applicants. We truly got the best of the best and I’m excited to help them see why making UCI their #1 choice was the right move. Our new graduate students – 125 of them in M.A. and Ph.D. programs – come from top universities and colleges and we’re looking forward to shaping their research skills as future professors and professionals. Our incoming class of students, both undergrad and grad, brings our total student count in soc sci to 6,874, making this our largest UCI soc sci student population ever. ZOT!

To help teach and mentor these awesome Anteaters while growing our school’s global reach in mold-breaking social science research, we’re welcoming in our largest group of new social sciences faculty in recent history. Fifteen scholars coming in from universities across the U.S., stretching from UC Santa Barbara in the west to Rensselaer Polytechnic Institute in the east, are bolstering our scholarly areas of inquiry in all of the school’s departments. You can learn more about them here. We will once again be welcoming new faculty at our annual Zotoberfest on Oct 5 @ 3 p.m. in SBSG 1517. If you’re a member of the soc sci faculty or staff, I hope to see you there!

I like to take this time each year to highlight some of our outstanding accomplishments from the previous year, and the list always seems to get longer. We successfully launched a new program on corporate welfare, and entered phase one of planning for a new summer institute at UCI that will bring together scholars to tackle the tangled legal web of technology, big data and society. We also partnered with the School of Humanities to launch the Center for Critical Korean Studies.

We were fortunate to receive not one, but TWO $1M gifts from the estate of Christian Werner, emeritus professor of geography and former dean of the UCI School of Social Sciences. Christian passed away in March 2016 at the age of 81, following a lifelong career in academia with UCI. He and his partner, Kathy Alberti, a long-time UCI staff member in the school’s graduate office, were ardent supporters of graduate education and student success. The funds have established an endowment for graduate fellowships that we’re beginning to award this school year. We’ve also received $2M to establish the Dhan Kaur Sahota Presidential Chair in Sikh Studies, housed in anthropology, that will contribute to the study of Sikh religion and culture in its political and social context, as well as potentially Sikh immigrant incorporation and civil rights issues impacting Sikhs in the United States.

We drew over 2000 people to campus for our second Lunar New Year festival, doubling our crowd from our 2016 celebration, and we’ve already set the date for our 2018 celebration. Mark your calendars for February 12; you won’t want to miss the live cultural entertainment and more. We also had a great turnout – 1000 alumni – for our Homecoming celebration, and we’re looking forward to another great party in the park this year. And our Dean’s Leadership Society, a fundraising and support network which began three years ago with 8 members, now stands at 89. Funds generously contributed by DLS members are supporting a number of our student activities and programs like UCDC, as well as providing research funds to help recruit and retain top faculty members.

Among our many community partnerships, sociologists Goldberg and Snow launched a landmark study with the United Way on homelessness in Orange County.  They found that the price tag of homelessness in OC totals nearly $300 million, while placing people who chronically live on the streets into housing would actually save $42 million in health care, law enforcement and other expenses. We are finalizing a needs-assessment report with Asian Americans Advancing Justice on Orange County’s Asian American communities which will be released this fall. We partnered with the Irvine Chamber of Commerce for the second year in a row to host the annual Business Outlook Breakfast, which drew over 700 business leaders and spotlighted our experts in domestic and international economics, and we’re in the planning stages for the 2018 breakfast, set for Jan 24.

Our undergraduate student groups, like the Dean’s Ambassadors Council and Global Connect, continue to enhance the educational experience for all of our students, and our participation in activities ranging from leading the First Gen First Quarter Challenge to partnerships with the Veterans Services Center and newly launched student initiatives exemplify our commitment to an inclusive environment for all students.

Speaking of creating an inclusive environment: I am proud to report that in the past four years, we have significantly diversified the professoriate in the social sciences at UCI, and I would like to thank everyone for their efforts in this regard. Of our new hires during this period, 21% are from groups historically underrepresented in the professoriate, 30% identify as non-white and 51% are women. As we serve an increasingly diverse student body—and in a time where role models and allies are more important than ever to our students--I am truly grateful for the work our chairs, equity advisor and search committees put into demonstrating our commitment to a diversity of backgrounds and perspectives for enhancing campus climate and advancing scientific knowledge.

In terms of honors and awards for our faculty, this has been an absolutely awesome year. A sampling:

We continue our track record of publishing our work with the best academic presses and in prominent journals. This year, the media picked up a lot of our work, too, highlighting the breadth and depth of our faculty expertise: from Judy Treas (sociology) on how today’s moms and dads spend more time with their kids than parents did 50 years ago to Barbara Sarnecka (cognitive sciences) and Kyle Stanford (LPS) in collaboration with cog sci graduate student Ashley Thomas on why we’re so afraid to leave children alone. Kristin Turney (sociology) published work that found children in foster care are at much greater risk of physical, mental health problems. A study published by Cynthia Feliciano (sociology) found children of immigrants have higher educational expectations that native-born peers. Matt Harding (economics) published a study that found delayed gratification associated with fast food frequency which may hold clues for potential interventions to improve healthy choices, and fellow economist Damon Clark found setting goals around tasks, not outcomes, is the best way to improve performance – a little piece of advice we can all take with us in the coming academic year. We maintain a full database of media hits on our website. In 2016-17, our faculty and students were featured in 221 media publications, comprising 414 stories. The top venues in which UC Irvine social scientists appeared were The Washington Post, Los Angeles Times, Orange County Register, Southern California Public Radio, The New York Times, NPR, The Atlantic, The Huffington Post, VOX, and MSN.

Faculty also published a number of new books on topic ranging from skepticism about the practice of philosophy (Maddy), problems with the school-to-prison pipeline theory (Sojoyner), and costs of war (Hironaka) to the physics of empty space (Weatherall), causes and consequences of social inequality (Ragin), the real story about money (Bandelj), and how we can better navigate the complex study of global issues (Darian-Smith and McCarty).

Jack Peltason used to say that a university’s staff members are the lifeblood of the institution. 14 of our dedicated staff members received five-year incremental service awards at the annual Staff Assembly recognition breakfast. Topping the list for the school were Edna Mejia with 45 years of service; and Mike Migalski, Justine Sarashid, and Susan Yoshihara, all with 30 years of service. Kudos to all of our dedicated and hardworking staff, without whom we would not be able to achieve our research, teaching and service successes.

I highly value our faculty members’ efforts to work with the media and to advance research on difficult issues in the public sphere. Like our founders, we remain a bunch of bold, mold-breakers who aren’t afraid to push the boundaries on the tough topics of immigration, social change, health, the economy, human rights, our nation’s global standing and relationships with world leaders, and the refinement and defense of science itself—oh, just to name a few things that are especially relevant now. The challenging period we are navigating necessitates a bigger push to get the actual facts and rigorous research methods into the hands of those working to create positive change. Let’s face it: The campus will see significant challenges this year—not the usual budgetary or bureaucratic challenges, but ones that will cut to the core of who we are as a country and what we do as a university. We are in a crucial position. To quote one of my new favorite science fiction authors, N.K. Jemisin, we will have to advocate “for those who have to fight for the respect that everyone else is given without question,” as we seek to spread knowledge, not fear or hate. And I’m proud to be a part of a school that puts its values into practice, continuously, daily, in research, teaching, and outreach that truly makes a difference. Thank you all. Here’s to what may come in 2017-18!