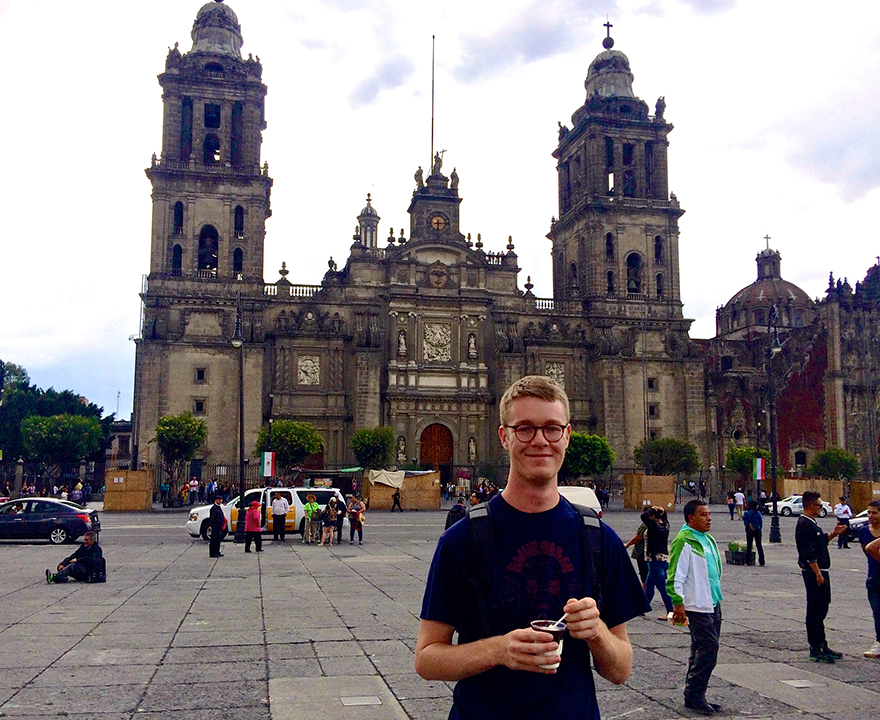 
As an undergraduate with a passion for the Spanish language and foreign literature, Steven Schmidt never considered that he’d go on to study sociology in his graduate career. But a transformative year abroad in Chile changed his perspective in a matter of weeks. Now, he’s working toward his Ph.D. in the School of Social Sciences’ Department of Sociology, and has segued his interests into the study of urban sociology and political economy in Latin America. And thanks to the National Science Foundation’s Graduate Research Fellowship Program (NSF GRFP), he will be able to spend a year doing fieldwork in Mexico City to get the answers he’s been looking for.

A bookworm from a young age, Schmidt became fascinated by the works of Latin American authors while he was in high school. Wanting to be able to read the original texts instead of English translations, he began studying Spanish, which later led to his majoring in Spanish as an undergrad. But during a year abroad in Santiago, Chile, he took a course that introduced him to a new academic world.

“I felt kind of lost the first semester, so I decided to take a course on Santiago to learn more about the city,” he says. “I wanted to know about where I was ­and appreciate the history and culture of this place.”

It was the first time since high school that he’d taken a course that wasn’t literature or history related, and he was surprised to realize that the aspects that interested him about Spanish literature – culture, architecture, and how people relate to their surroundings – comprised an entirely different field of study. And so his interest in urban sociology was born.

Schmidt was fascinated by theorizations about how metropolises work and how people relate to their cities. But it was the questions addressing how cities reproduce inequality or how architecture and urban form can mitigate inequality that really hooked him. He knew that he wanted to extend his studies to delve deeper.

“As a junior in college I realized I had really missed out on what I wanted to do and was left with all these questions,” he says. “I knew I wanted to do a Ph.D. in sociology because I felt like I needed more time and more space and more classes to really explore it.”

So, after completing undergrad, Schmidt made the move to the West Coast to begin his sociological journey at UCI. His research took him back to Latin America last summer, this time to Mexico City where he delved into the redevelopment initiatives being implemented in the region and their effects on long-standing city residents. He specifically looked at the displacement of street vendors who worked in a particular district in Mexico City. When these redevelopment initiatives were put in place, vendors who had worked in the area for decades were forced to leave.

Schmidt was intrigued by the language used in the initiatives, which was meant to appear inclusive. However, the changes they brought about (the rehabilitation of older buildings and repairs to the city infrastructure to make the area more “tourist-friendly”) were excluding long-term occupants. Through interviews with urbanists, residents, and vendors, he learned that the vendors who were being forced to relocate had previously held quite a bit of power when it came to city government, which is how they were able to hold their posts for so long. But the changes did not allow for this to continue.

“I think what’s new now is the language [within the initiatives] that justifies the removal of these vendors in very democratic terms,” Schmidt says. “The vendors relied on personal connections in city government, trading votes for permission to sell in a specific location. And this was business as usual until the city government decided to democratize in a way that excludes people from political structure.”

The result was vendors removed from their livelihoods and, paradoxically, with less power in democratized city politics, which Schmidt says could apply to the broader population of working class residents.

He is still trying to decipher what all the information he gathered means, which is why he will continue this project with the funds from the GRFP. He plans to utilize the fellowship award to fund an additional year of research in Mexico City, where he will once again interview urbanists and residents to uncover how and why inequality is increasing in urban areas, despite measures supposedly aimed at democratizing and making things affordable. He will then focus on writing his dissertation.

In terms of the fellowship funds, Schmidt says having a year of fieldwork financed is the biggest advantage, and he’s thrilled at the opportunity to conduct his research without the added stressor of finding financial support.

“The other advantage I have because of the fellowship is the time period,” he says. “When I was there last summer I was so rushed. I’m really looking forward to having the space to breathe and take my time and do a good job.”

pictured: Schmidt in front of a cathedral in Mexico City.