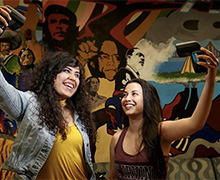 
UC Irvine may seem an unlikely haven for Latino students. The campus is located in what used to be a largely white Republican community, home now to so many Asians that people joke that UCI stands for University of Chinese Immigrants.

But the Irvine campus is now the most popular UC choice for Latino freshmen applicants, topping longtime leader UCLA for the first time last fall. And last month the campus won federal recognition for serving Latinos — a still-rare distinction among elite research universities.

In all, 492 campuses in 19 states and Puerto Rico have been designated Hispanic Serving Institutions, which allows them to apply for about $100 million annually in federal research grants. To qualify, the campus student population must be 25% Latino, with more than half financially needy.

In California, nearly all Cal State campuses, at least half of California Community Colleges and half of UC campuses have received the recognition. But UC Irvine and UC Santa Barbara are the only HSI campuses among the 62 members of the Assn. of American Universities — an elite network of public and private research universities that includes the Ivy League, UC, Stanford and USC.

Just three of the nation’s 100 universities with the largest federal research portfolios are HSI campuses — UC Irvine ranking second to a specialized cancer center at the University of Texas, said Terry Hartle, senior vice president of the American Council on Education, which represents 1,600 colleges and universities.