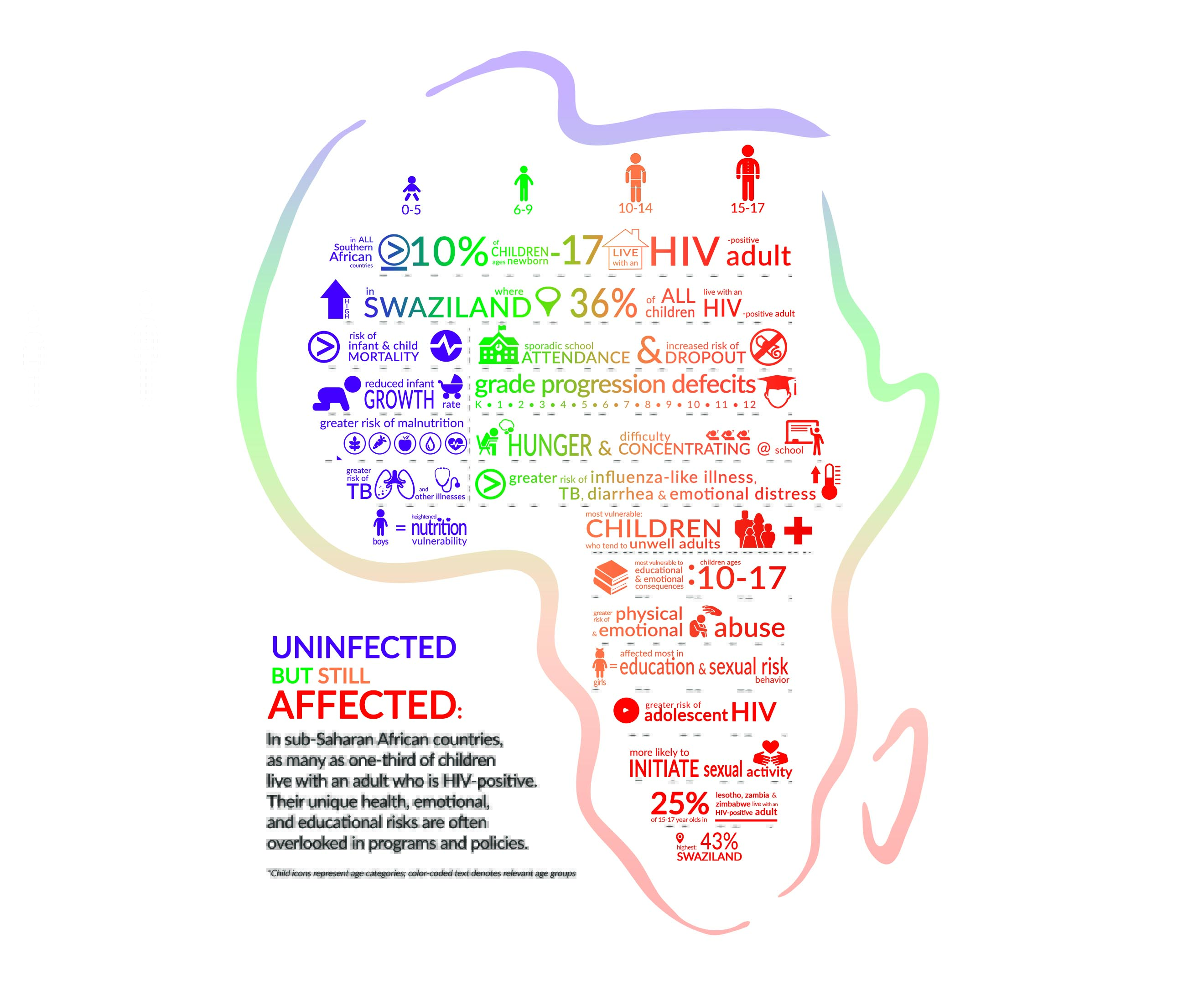 
Despite a growing body of research on HIV/AIDS in sub-Saharan Africa, there is limited information on how the disease affects one of the most vulnerable populations –children living in households with adults who are HIV-positive and/or AIDS-ill. In an effort to fill that gap, UCI sociologist Rachel Goldberg – who has done prior research on this group – conducted a review of the studies that do exist. She finds that this population is substantial and faces a greater risk of death and disease as well as negative behavioral, emotional and educational outcomes.

“Many studies and reports over the years have shined a light on the vulnerabilities of AIDS orphans and children born with HIV. Uninfected children who live with adults who are HIV-positive have remained a relatively invisible group of HIV-affected children in sub-Saharan Africa, despite the fact that they are a large population with distinct needs,” she says. “This group will remain sizeable in the foreseeable future due to a combination of new HIV infections, population growth, and reductions in AIDS deaths due to great successes in expanding HIV treatment.”

The article was released in a special children and HIV-focused issue of AIDS Care and it was circulated widely at the AIDS conference in Durban, South Africa over summer.

Goldberg and study co-author Susan Short from the Department of Sociology and the Population Studies and Training Center at Brown University reviewed 47 studies that look at the prevalence of children living in households with HIV-positive adults in sub-Saharan Africa and/or the consequences this creates for child wellbeing.

They found that this population of children is sizeable, particularly in countries where HIV prevalence is high. In fact, a study they published in the journal PLOS ONE in 2015 revealed that in all Southern African countries, over 10% of children aged 0-17 years live with adults who are HIV-positive. This figure reaches as high as 36% of children in Swaziland.

“In terms of child well being, our review suggests that infants are vulnerable to physical health consequences while older children experience health, educational, and emotional consequences,” Goldberg says.

Young children – newborn to age 5 – whose mothers are living with HIV exhibit higher rates of infant mortality, higher risk of contracting tuberculosis and other illnesses, reduced infant growth rates and increased malnutrition when compared with children whose mothers are seronegative.

Among older children, those who live with an HIV-positive adult face a greater risk of contracting TB and influenza-like illnesses, particularly those who tend to an adult who is AIDS-ill - so-called “young carers.” And adolescents living with adults with HIV are at higher risk of contracting HIV themselves.  Evidence also suggests higher rates of emotional distress among children with caregivers who are AIDS-ill compared to other children, although several studies make the point that children who care for an ill loved one can also experience emotional benefits - pride, emotional bonding, emotional maturity -  particularly if the child has access to other social resources that minimize the costs.

With regard to educational outcomes, co-residing with adults living with HIV is associated with irregular school attendance, dropout, and slower school progression - especially in secondary school – as well as reports of being hungry at school and having difficulty concentrating in class.

“Future research should look in more detail at whether these relationships are causal and why co-residing with an adult who is living with HIV is associated with negative outcomes,” Goldberg says. “The studies we reviewed suggest that pathways include poverty - which can be exacerbated by illness, transmission of opportunistic infections, AIDS stigma, tending to unwell adults, and adults’ emotional distress.”

Researchers should also look at what factors promote resilience among these children, she adds.

It is also important to consider how vulnerabilities vary according to individual, household, and community characteristics. For example, there were some notable gender trends, she says. The infection and illness of mothers appears to be most consequential to children’s wellbeing. There is also some evidence that in adolescence, girls’ schooling and behavior are more affected by living with an adult who is HIV-positive than boys’.  Girls are also more likely than boys to provide care for an adult who is AIDS-ill.

Goldberg and Short believe that current care and outreach efforts, including family-centered care and community outreach, should be examined to assure that the distinct needs of this population are being met, particularly in areas with high HIV prevalence. While they call for an increase in targeted attention to these children’s needs, they emphasize that these children’s lives are enriched and enhanced because they live with these adults.

“The key,” Goldberg says, “will be to affirm HIV-affected families while helping them to meet the needs of their children.”