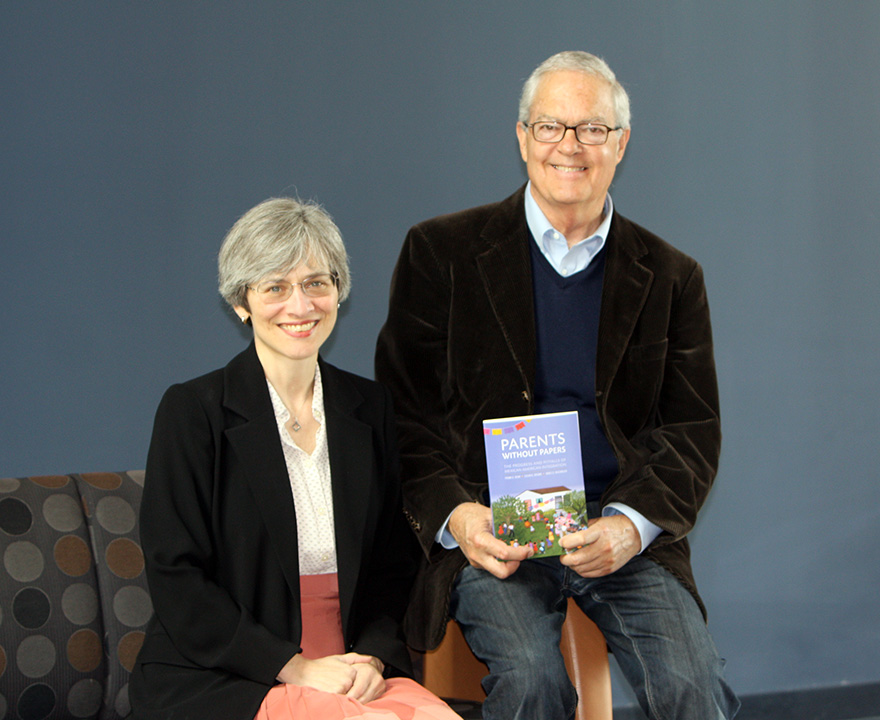 
Educational attainment has historically been linked to a whole host of positive outcomes – from higher incomes to lower crime rates to better health. But for the children and grandchildren of Mexican immigrants who never legalize, years of schooling lag their peers as much as 2.3 years, say UCI sociologists. In terms of income, however, the grandchildren of immigrants are outperforming comparable non-Hispanic white peers. The findings are detailed in Parents Without Papers: The Progress and Pitfalls of Mexican American Integration, an award-winning book from UCI sociologists that sheds light on three generations of immigrant integration and highlights a shifting demographic trend in the U.S. labor market.

“What’s interesting about these findings is how well the third generation is doing, especially income-wise,” says Frank Bean, UCI Distinguished Professor of sociology and co-author. “A lot of people have the misconception that most Mexican Americans are poor or uneducated, but many are actually doing quite well in school and in the upper reaches of working- and middle-class America – this is especially significant given that upward mobility has been harder to achieve for working-class Americans over the last 30 years.”

The book – which earned the 2016 Otis Dudley Duncan Award for Outstanding Scholarship from the American Sociological Association Section on Sociology of Population – is the first work to estimate the magnitude of the effect of unauthorized status on children and grandchildren of Mexican immigrants into adulthood. It’s co-authored with Susan Brown, sociology associate professor, UCI, and James Bachmeier, ’10 UCI Ph.D. and sociology assistant professor at Temple University.  Bean is the only sociologist in the country to have won the Duncan Award three times.

The findings are based mostly on data collected through the Immigration and Intergenerational Mobility in Metropolitan Los Angeles (IIMMLA) survey, which was funded by the Russell Sage Foundation. The IIMMLA project was an outgrowth of the Center for Research on International Migration, established at UCI in 2000, after Professor Bean was recruited here.

IIMMLA was designed to assess how well the young adult offspring (1.5- and second-generation) of immigrants in Los Angeles’ five-county metropolitan area are faring as they move through American schools and into the labor market. The project was extended to include third- and higher-generation Mexican Americans because of the longer history of Mexican migration to the United States.

Through detailed survey questions on socio-cultural orientations, economic and geographic mobility, and civic engagement, they found that unauthorized entry isn’t such a big handicap, but that remaining unauthorized is.

“People whose parents remained unauthorized faced significantly higher educational disadvantages because of their parents’ status,” says Brown, a sociology associate professor at UCI. “These kids – now adults – are U.S. citizens but still feel the effects of their parents’ inability to legalize.”

But when parents are able to legalize and naturalize, the researchers found that their offspring do quite well in completing high school and some college, as well as those whose parents entered the country legally.

The study shows that grandsons of immigrants earned an average $17,820 more annually than their fathers - $47,370 vs. $29,950 – and $3,684 more than similar non-Hispanic whites. Income gains between second and third generation females and third generation non-Hispanic whites were equally impressive. “This shows that working-class pathways to earnings mobility are available and taken advantage of, even when the increase in educational attainment overall is not significant,” Bean says.

While this may appear puzzling, it makes more sense when you look at hours worked, says Bean.

Bean points to rising familiarity with the U.S. labor market – enabling Mexican Americans to find jobs that offer more hours and higher pay without requiring an advanced education – as one reason the third generation is out-earning its parents and grandparents.

“The longer the children and grandchildren of immigrants have been here, the more ways they’ve found to make more money,” he says.

The authors devote a chapter of their book to the shifting demographics in the United States that drive home the importance of Mexican Americans for the workforce.

“The number of native-born persons – including native-born Mexican Americans in the U.S. – who are available to do the type of work that has been traditionally done by immigrants – farming, construction, hospitality work – is declining significantly,” Bean says.

“This means the workforce available to do the jobs will be significantly smaller,” he says. “A low birth-rate, coupled with a U.S. born population that is more and more college educated, means there are fewer people to do these types of jobs.”

The authors note that while the public seems unaware of this demographic change, employment vacancies are occurring, and immigrants are filling them and doing better financially.

The findings point to a need for more informed policy on talks involving pathways to legalization, they say.

“If we have all of these immigrant workers doing work that needs doing, and if there aren’t others to do it, then it makes sense to provide pathways to citizenship that enable the children and grandchildren of the workers to have a chance to go to college and join the middle class,” Bean says. “If we don’t, we will soon face a labor shortage that native-born Americans aren’t there to fill.”

Read more about this research in Parents Without Papers, available online at https://www.russellsage.org/publications/parents-without-papers. Bean’s previous Duncan Award winning titles are The Diversity Paradox: Immigration and the Color Line in 21st-Century America (2010, co-authored with UCI sociologist Jennifer Lee), and America's Newcomers and the Dynamics of Diversity (2003, co-authored with Gillian Stevens).