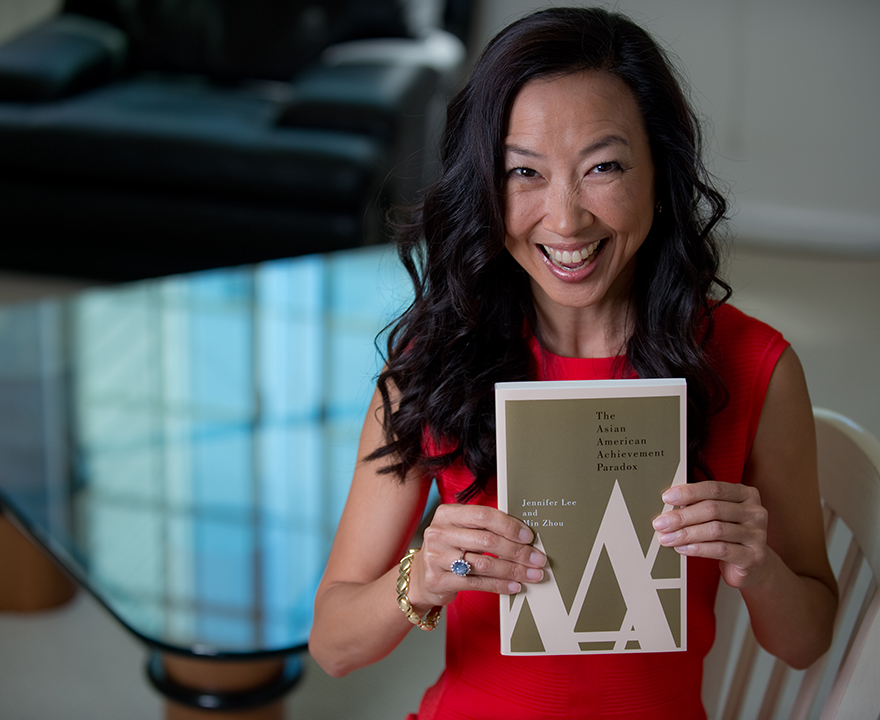 
Jennifer Lee, UCI sociology professor, and Min Zhou, UCLA sociology professor, are the recipients of three book awards from the American Sociological Association. The 2016 Pierre Bourdieu Award, awarded by the Section on Education, recognizes the coauthors of The Asian American Achievement Paradox as having the best book in the sociology of education published in the two preceding years. The Thomas and Znaniecki Book Award is bestowed upon the authors for the best book in international migration. And the Asia and Asian America Section Book Award acknowledges the authors for having the most outstanding book on Asian America published in the past two years.

“We are enormously honored to receive this unexpected trifecta of book awards from the ASA. More meaningful than the individual acknowledgement is that the awards are a testament that the study of Asian Americans—which has often been ignored in social science research—is integral to our broader understanding of immigration, education, inequality, and race and ethnic relations,” said Lee.  “Moreover, that the National Science Foundation recently awarded a grant to conduct a national survey of Asian Americans underscores that the scientific community recognizes this as a national priority.”

Published in July 2015, the book debunks the claim that Asian American educational achievement can be reduced to the assumed superior values and traits of Asian culture. The coauthors conducted 82 in-depth interviews with 1.5- and second-generation Chinese and Vietnamese people living in the Los Angeles/Orange County metro area. They also interviewed 56 1.5– and second-generation Mexicans, as well as 24 third-plus-generation, native-born whites and blacks for comparison. The book also includes census data and results from the Immigration & Intergenerational Mobility in Metropolitan Los Angeles study. Lee and Zhou show how historical, cultural, and institutional processes work together to confer advantages to the children of Asian immigrants – dubbed the “model minority” – and highlight how “positive stereotyping” has both helped and hurt Asian Americans. It has been widely cited by media in news stories about the exceptional academic outcomes of Asian Americans.

The Asian American Achievement Paradox will be featured at this year’s American Sociological Association meeting in an Author Meet Critics session and in a book symposium (a five-part book review and author response) that will appear in Ethnic and Racial Studies in the fall.

Lee is a Columbia University graduate who joined the UCI faculty in 2000 following a two-year post-doctoral fellowship at UCLA. She has spent her career at UCI, aside from a fellowship year at Stanford (2002-03), a visiting associate professorship at the University of Chicago (2006-07), and a year as a visiting scholar at the Russell Sage Foundation (2011-12). She focuses primarily on immigration, the new second generation, race/ethnicity, and inequality. Her work has been published in Social Forces, Annual Review of Sociology, Proceedings of the National Academy of Sciences, and many other outlets, including the American Sociological Review where she serves as deputy editor.  She has four books to her credit – all of which have now earned awards from the American Sociological Association. Her research has been funded by the National Science Foundation, the Russell Sage Foundation, and the Center for the Study of Race, Politics and Culture (Chicago), and in 2008, she was named a J. William Fulbright Scholar to Japan. In August of last year, she became one of 12 new members elected to the Sociological Research Association, an honor recognizing the most successful researchers in the field since its founding in 1936. And this August, she’ll take the reigns as chair of the American Sociological Association’s Section on International Migration.