Ever on the go 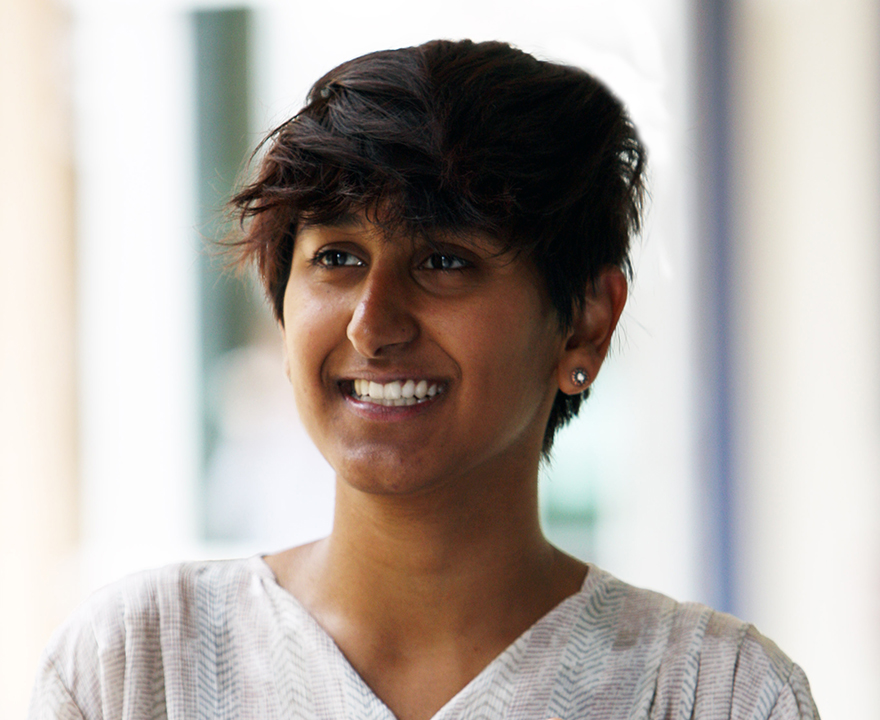 Ever on the go


Just try to keep up with Medha Asthana.

One of the 2016 School of Social Sciences commencement speakers, she lives a life of exploration and is always on the move. From her majors in anthropology and business administration to her involvement in a multitude of on-campus organizations and her stints abroad in places like Costa Rica and Chile, she is continuously seeking out new experiences and ways to make an impact in the world. And that’s just how she likes it.

“I’m always absorbing things,” she says. “Like a greedy sponge is how I think of it. I’ve always been a curious student, and I’ve just taken that and applied it to the university space.”

This natural curiosity has served Asthana well, and she has received a remarkable number of honors in her time at UCI. She’s been awarded the 2015-2016 UCI Alumni Association Distinguished Anteater Award, a 2015 Reward Opportunity Advancing Distinguished Students (ROADS) Scholarship, the 2015 Elena B. and William R. Schonfeld Endowed Scholarship, been named an Undergraduate Research Opportunities Program Fellow, and more.

Her inquisitive nature has taken her in all directions as a student as well. Even in high school, she never had a clear-cut idea about what she wanted to do or where she wanted to go. There were simply too many options. She enjoyed English and social studies and was a good writer, but also found herself to be an adept public speaker. Her father suggested that she might have a knack for business, so when it came time to apply for colleges, she looked for schools with strong business and communications programs.

UCI’s business administration program made the cut, but by the time Asthana found out she was admitted, she had already committed to Loyola Marymount University in Los Angeles. Her parents encouraged her to at least visit the UCI campus, so she tentatively agreed. But by the end of her first campus tour, there was no hesitation—she knew she belonged at UCI.

“Because of that one tour, the next week I dropped Loyola Marymount and enrolled at UCI the following week,” she says. “I was really impressed by the atmosphere, the friendly feel. I could see myself here.”

With a laundry list of interests and a campus full of opportunities, Asthana wasted no time in getting involved in extracurriculars. Her first order of business was joining the team at Middle Earth student housing as a community programmer. It was a way to meet her fellow first-year peers and really interact with people from all different backgrounds.

“Housing really exemplifies UCI,” she says. “You find the most amazing, interesting, and unique individuals there. And it’s a very accepting space. There’s a lot of themes like social justice, community service, LGBTQ and gender friendly halls—everything there is very comfortable and it’s a very open, inclusive space.”

She also began to explore in the classroom, taking an introductory anthropology course out of curiosity. The subject really spoke to her, and she continued taking classes, eventually declaring herself a double major.

During her second year—while taking a break from her work with student housing—Asthana packed her schedule with a number of on- and off-campus activities. She joined ASUCI as a Business-Marketing Commission intern, wrote for the off-campus UP Lab blog, served as a senior consultant with Students Consulting for Non-Profit Organizations, and—after being inspired by her own UCI tour guide—joined the UCI Campus Representatives.

“My whole UCI career is characterized by me exploring every nook and cranny of the campus,” she says. “Really, it was my way of forming myself and seeing where I fit in.”

While she learned a great deal from each program she was a part of during that year, the one that had the biggest impact was the UCI Costa Rica Program in Global Sustainability and Cultural Immersion. The program involved two quarters of classes on campus, and during spring break of her second year, Asthana jetted off to Costa Rica with fellow students where she studied civic engagement, cultural competency, and sustainability. She later presented her research findings to members of the UCI community at the UCI Costa Rica Program Research Symposium.

“I would say Costa Rica marks this moment, in retrospect, when I first started what I call listening to other voices,” she says. “Because up until then mostly everything I was doing was ego-centric. Starting my education as a business major, you kind of seek to find profit and avenues for you to make you space in. But in Costa Rica, I just started absorbing everything.”

This experience was a transformative one for her, and ended up affecting her entire outlook on her place in the world. She says that for more than a year after returning from Costa Rica, she took only cold showers. She also began composting in her apartment, and presented ideas about sustainability and composting programs to her housing team as their programs advisor when she came back in her third year.

“That was the first time I found myself being really impacted by other people’s realities,” she says. “And that is what really made me delve more into anthropology. It was more about me sitting back and letting other people tell me their story.”

She carried this newfound passion through to her studies in anthropology, getting involved in the department’s honors program and—with the help of her advisor, associate professor and director of undergraduate students Keith Murphy—carving out her own path to do research abroad for her undergraduate thesis.

Then came they hard part; choosing a research topic. For Asthana, whose eyes and ears were always open for the next subject to catch her interest, it was a struggle. Eventually, she ended up choosing to study social movements—specifically the Chilean student movement for public, free, and high quality education.

She set off for Santiago, Chile in June 2015, where she settled in as a student at Pontificia Universidad Católica de Chile. In addition to her courses in anthropology and entrepreneurship, she was able to witness firsthand the political power dynamics on a very conservative, Catholic university campus.

While she conducted her research and immersed herself in Chilean culture, she also interned at Londres 38, an ex-detention center converted into a space of memory for victims of political torture during the Chilean military dictatorship. There, she translated testimonials of survivors.

“It was a very real thing,” she says. “That was like my political awakening.”

“That happens to me,” she says. “I’ll have these experiences that just fundamentally change the way I think about things instantly. It’s a little impulsive, and it’s not even always conscious.”

Whether conscious or not, her views have changed drastically since her first campus tour, and with so many experiences under her belt now, it isn’t hard to see why. She has transitioned from what she calls ‘an entitled millennial’ to ‘a listening ear’ and to a helper to those who are already doing work to change the world. It’s no longer about ego for her.

“I started out with the mindset of ‘I’m going to change the world,’” she says. “And then I slowly realized that there are millions more people who are doing this work. And I’d rather help them. That’s where activism and advocacy come in—seeing where my skills can help and how I can be of service to other people.”

Since returning from Chile, she has put these skills and desire to serve to use. She traveled to San Diego just this spring as part of the UCI Alternative Spring Break Program, where she participated in community service and learned about the struggle of undocumented immigrant communities. She’s attended the 31st Annual Empowering Women of Color Conference and the UCSA's Student Lobby Conference; been chosen as the anthropology department’s Outstanding Undergraduate Student; and was awarded the Order of Merit for Social Sciences and the Chancellor’s Award for Excellence in Undergraduate Research.

So what are her plans moving forward? In true Asthana fashion, it’s still not set in stone. If she is awarded the Fulbright Scholarship (she is currently an alternate) she will travel to Uruguay next year to continue her education and research. She is also applying to jobs in various community organizations, so whatever she ends up doing, it will be in the interest of the greater good.