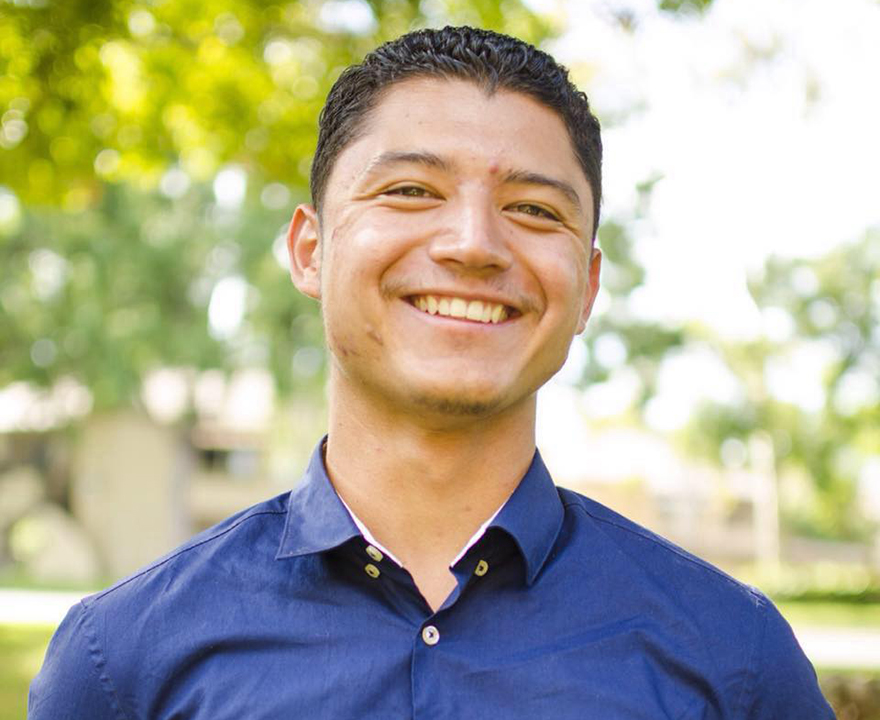 
It’s always refreshing to see a student who is not only passionate about their own education, but about ensuring education for others. Daniel Cano, a soon-to-be '16 alumnus from social policy and public service, is one such individual.

The California native understands the struggles many young people face getting access to education—as a first generation student himself, he hadn’t even considered going to college until his junior year in high school when he heard two other students discussing the campus tours they had taken. He draws on those experiences, and those of his friends and peers, to motivate him to help others.

“Everyone is born into different circumstances and everyone starts at a different point in the same race,” he says. “Some people have setbacks, and I want to help break down these barriers and elevate people to a more equitable space so everyone can have that access and that opportunity to achieve their potential.”

Through his double major in SPPS and psychology and social behavior, Cano has spent most of his time at UCI finding ways to assist underserved communities with resources and access to higher education. He is particularly passionate about helping Latino and first generation students, and conducted his field study work (a part of his SPPS curriculum) at the Save Our Youth (SOY) Center in Costa Mesa.

The nonprofit agency serves low-income and at-risk youth and offers a healthy environment for them to access mentoring, tutoring, and college preparedness resources. Since Cano received help from after school programs himself in high school, he was drawn to the thought of mentoring youth and helping them take advantage of educational opportunities. The center’s creative arts program was also a draw for the music-lover.

“In high school, I would produce music,” he says. “That was one of my hobbies. And, I never showcased that to the world. I just kept it to myself, instead of a diary. So for me to be able to tutor and instruct but also teach them about music composition or writing songs or poems—it let me put two passions together.”

Cano was able to channel that passion into a research paper, in which he examined the declining high school graduation rates of Latino males. In fact, that same paper earned him the SPPS Research Award last year, which recognizes SPPS majors who have done outstanding original research that addresses a social issue within education, health or governance.

Just this past fall, he was able to take his research interests across the country as a part of the UCDC program where he interned at the White House Initiative on Educational Excellence for Hispanics. As a student and intern, he was able to work hands-on with educational policy related to the Latino community, including writing policy memos. That part of the job, while difficult, offered invaluable writing skills and allowed him to experience the work that goes on behind policy changes.

“I definitely gained a lot of skills that I didn’t have previously,” he says. “I attended networking events and met a great people through the UCDC dorms—both from other UC schools and schools outside the UC system.”

While doing so much work on a larger scale, Cano has been just as active helping his fellow UCI students. He co-founded the Social Policy and Public Service Advocates, an on-campus club that holds weekly meetings on topics such as protest culture, resume building, public speaking and more. The aim of the group is to form a community where various topics can be discussed and help can be offered in a comfortable environment. All students—both in and out of the SPPS major—are encouraged to join.

Cano has also been involved with the Student Outreach and Retention Center (SOAR) and was a major player in the recently opened SOAR food pantry on campus. Though not a cause directly related to education, food insecurity is a very real issue for many college students.

“When I started looking at data, one in four students reported being food insecure,” he says. “That’s a big issue and I think it speaks to the larger issues of increased tuition and housing costs.”

These bigger issues are what he hopes his peers will tackle as they all set off for their future careers. For his part, he will begin a yearlong fellowship with the Greenlining Institute this August. The nonprofit institute focused on research advocacy and policy reform, specifically within communities of color and low-income communities in the bay area.

“It’s going to get me outside of my comfort zone in terms of public speaking—that’s what they heavily emphasize,” he says. “I’ll be doing research on the side but I’ll also be speaking to audiences and trying to get folks to implement policies and talk about certain issues that we see in the community.”

Following his fellowship, the road is still open. His plans now includes going back for a master’s degree with an emphasis on policy and education, and while he isn’t sure what form his career will take, he knows the impact he wants to make.

“I want to make sure what I do is tied to empowering communities from disadvantaged backgrounds to really seek opportunities to help change their trajectories and their future generation’s trajectories,” he says. “I do truly believe that people have the potential for greatness. Different factors will tap into that potential, but from what I’ve seen, I think the biggest one could be education.”

He hopes that his fellow graduates and incoming UCI students will hold onto that same passion for advocacy and educational equality, and continue trying to make the world a more accessible place for people from all backgrounds. And those who have not yet found their voice should know that it isn’t too late. Cano was not always vocal about his opinions, though he always felt like an advocate in his own mind. It was his time at UCI and his experiences both on and off campus that he says gave him the tools and the confidence to publicly share his opinions.

“To my fellow graduates, I would say speak your truth,” he says. “Advocate for yourself, advocate for equality, and don’t hide your challenges and struggles. They can unify and unite people. Take the activism with you.”