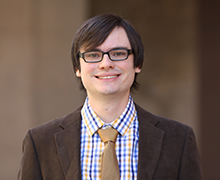 
Jeffrey Schatz, a third year PhD student in Logic and Philosophy of Science, recently had a paper accepted by the highly regarded Notre Dame Journal of Formal Logic.  The paper, entitled "On the Status of Reflection and Conservativity in Replacement Theories of Truth," takes up a theory of truth recently articulated and defended by Kevin Scharp (Ohio State).  Scharp's theory, known as "ascending and descending truth" (ADT), is meant to provide a solution to certain well-known paradoxes, such as the liar paradox (i.e., the statement "This sentence is false," the truth of which seems impossible to assess).  In his paper, Schatz offers a new proof of the consistency of ADT, and also shows that ADT has a property known as "conservativity".  He goes on to argue that, because of this property, ADT faces previously unrecognized problems in accounting for the use of truth in mathematics.  Schatz was sole author on this paper.  Congratulations!