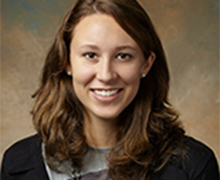 
Marian Gilton, a third year graduate student in LPS, delivered a paper entitled "Whence the Eigenstate-Eigenvalue Link?" at the Fourth IPP Conference on the Conceptual and Mathematical Foundations of Physics.  The conference was hosted by the Center for Philosophy of Science at the University of Pittsburgh, from March 31 - April 1, 2016.  Gilton's paper explored the history of a central interpretive principle of quantum mechanics, known as the eigenstate-eigenvalue link, which allows one to characterize when a physical system has a definite value for some property.  The status of the principle has been a matter of controversy in the recent literature; Gilton shows that, whatever else is the case, the principle has been a core part of quantum theory since its conception in the late 1920s.  Also speaking at the conference was Ben Feintzeig, a fifth year LPS student, who delivered a paper called "Topological Considerations in the Construction of Quantum Theories".  Feintzeig's paper explored how one should use information from classical physics in developing quantum theories.