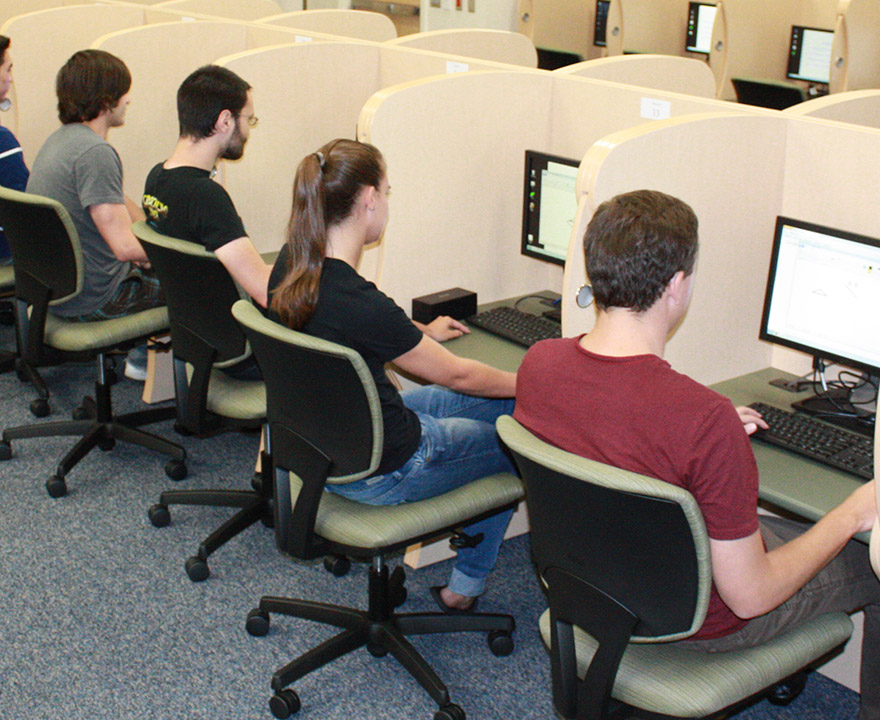 Part of the fun of being a chemistry student is experimenting with different elements in a lab to see how they react with one another. The experience isn’t something you’d expect to find in an economics department, but that’s essentially what’s happening in the Experimental Social Sciences Laboratory, says John Duffy, UCI economist and lab codirector.

“Our variables don’t cause explosions – but when you’re talking money and the economy, they definitely matter in the grand scheme of our daily lives,” says Duffy.

Launched in 2011 by UCI economist Michael McBride, the ESSL is a community facility utilized by UCI researchers from logic and philosophy of science, psychology, social ecology, business, sociology, anthropology, economics and others.

More than $1.2 million in grant funding has moved through the computer-based space, supporting experiments on everything from understanding how drivers respond to freeway sign messaging to how different genders identify and understand human emotion. The lab just secured another $68,000 grant from the Army Research Office to update technology.

“The ESSL really provides a service for a lot of people,” says codirector McBride. Graduate and undergraduate economics courses are taught directly in the lab, utilizing the 40 computer-based workstations. “Our next generation of economists – undergrad and grad – are learning hands on how to create experimental software and how to implement projects while learning in action about supply and demand.”

Undergrads working on independent studies with McBride and Duffy assist with experiments, and some go on to get additional funding to run their own projects. Graduate students also help run the lab while also securing funding and doing their own research.

McBride is working with one such student – Garret Ridinger – on the gender and human emotion study. Their findings were recently published in PLOS One.

“Our work has relevance in the gender wage gap debate, helping policy makers understand how men and women can differ when dealing with monetary incentives,” says Ridinger. “It’s really cool to show undergrads directly how economic studies like these have such wide reach in society.”

Duffy is currently running an experimental study aimed at finding the best monetary policy the Federal Reserve should be implementing.

“Think of it like wind tunnel testing of an airplane engine before it flies - you don’t put people on the airplane without testing the engine first. We’re doing the same thing with economic policies before they hit the market,” he says.

Specifically, he’s studying an approach to counter monetary depreciation due to inflation.

“To counter this effect, you can decrease the money supply at a rate that offsets inflation or you could pay interest on money holdings,” he explains. “But those types of policies would be difficult for the market to accept without proper testing first.”

“By studying this in the lab, we can learn about the economic consequences of such policies and whether changes to monetary policies are warranted.

Learn more about work being done in the ESSL online: http://www.essl.socsci.uci.edu/.