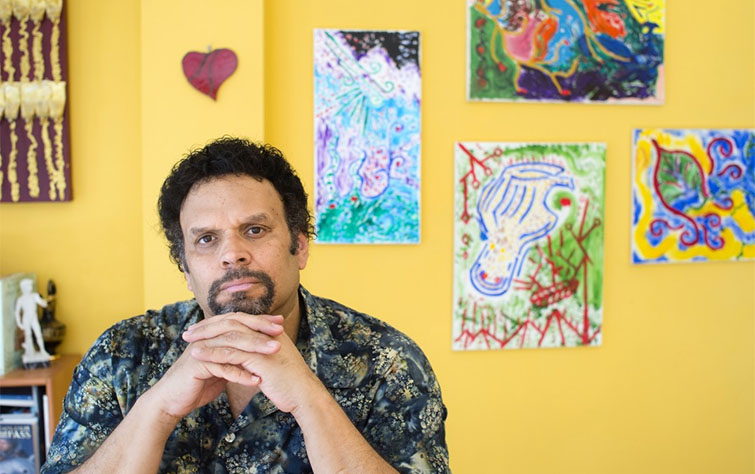 
A purple pool table, a stained-glass shark, a runaway dog and a live newt. Stepping into Neal Shusterman’s Laguna Hills home is a little like entering one of his best-selling young adult novels, where quirky creatures and imagery flourish.

On a recent Monday, the curly-haired author took a break from his busy writing schedule – which currently includes a graphic novel about the Holocaust and movie scripts for Challenger Deep and Tesla’s Attic – to discuss his eccentric work habits, the emotional roller coaster he faced basing a book on his child’s struggles and how a UCI humor column helped shape his career.

Born and raised in Brooklyn, Shusterman came to UCI in 1980 from Mexico City, where his family had moved when he was 16. He joined the Anteater swim team, double-majored in psychology and theater and, as a sophomore, approached the school newspaper about penning satirical essays.

“I brought three samples and was going to do a big dog and pony show to present the idea,” he recalls. Instead, because a trio of New University editors had resigned earlier that day, Shusterman wound up being invited to become features editor.

“My first act as features editor was giving myself a humor column,” he says.

Playfully titled “The Anonymous Column by Neal Shusterman,” the weekly report poked fun at everything from parking woes to politics. Today, Shusterman traces part of his success to the discipline of churning out copy every week during his four years at the paper.

Another formative experience arose during summer breaks, when he returned to New York and worked as a camp counselor. There, Shusterman began spinning yarns so popular that his young audiences persuaded him to write the best ones down. The first two “will never be published,” he says. “They were awful.” But the third eventually morphed into The Eyes of Kid Midas, a teenage fable deemed “hypnotically readable” by critics.

Shusterman’s preferred writing method is in longhand aboard a cruise ship, where he typically holes up in his cabin for 12 hours a day while composing a draft. “I’ve taken other writers with me, and they’re now hooked on the technique,” he says.

When not on the high seas, Shusterman tries to write at the library, Starbucks or – as a last resort – home, where he’s surrounded by assorted reptiles, chessboards and even a set of old movie theater seats.

All told, the 53-year-old father of four’s credits include nearly 50 books (Unwind, The Dark Side of Nowhere and The Schwa Was Here are among his most popular titles), 10 murder mystery games, a Disney Channel movie called “Pixel Perfect,” and episodes for the “Goosebumps” and “Animorphs” television series.

The work closest to his heart is Challenger Deep, a haunting, hallucinatory ride into the mind of a teenage boy slipping into psychosis. Populated by a one-eyed pirate captain, a terrifying serpent and a wisecracking parrot, the novel draws on the real-life experiences of Shusterman’s son Brendan, who began suffering delusions in high school. “He thought street signs were talking to him,” Shusterman recalls.

The psychotic episodes, which Brendan analogized to being “at the bottom of the ocean screaming and no one can hear me,” were accompanied by wild creative jags, Shusterman says. Some of the artwork his son produced now hangs in the family’s home.

About four years ago, after Brendan had regained control and began attending college, Shusterman broached the idea of a fictional work that would be grounded in what actually happened and incorporate several of the psychosis-fueled drawings. Brendan agreed, but once the book came out, he had second thoughts.

“He got a little scared because a lot of people didn’t know about his past,” the author says. “He was basically being outed as mentally ill.”

Nevertheless, when Shusterman was invited to speak about the novel at a conference, Brendan decided to join him onstage. “He was quite eloquent,” Shusterman says, and audience members later stood in line for 90 minutes to meet the pair.

Heading home after the appearance, Brendan turned to his dad and asked, “When can we do this again?”

For Shusterman, it was a cathartic, triumphant experience – “taking something negative and finding a way to use it as a positive influence in the world, shedding light on mental illness.”

-photo by Steve Zylius: UCI alumnus Neal Shusterman's most recent novel, Challenger Deep, won a 2015 National Book Award for Young People's Literature. Some of the artwork behind him was created by his son Brendan during psychotic episodes.