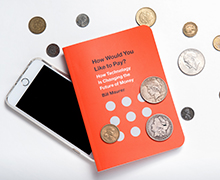 
From Barbie cash registers to bitcoin, Bill Maurer is a gold mine of stories about money.

Sitting in a sunlit office decorated with Mr. Monopoly artwork and a Plexiglas cube full of shredded greenbacks, the University of California, Irvine anthropologist recently discussed various financial facts, many from his new book, How Would You Like to Pay?, a pocket-size guide to money’s past, present and future.

Maurer, who also serves as dean of UCI’s School of Social Sciences, says technology is reshaping what’s in people’s wallets and, in turn, everyday life. Here are 10 things you might not know about money.