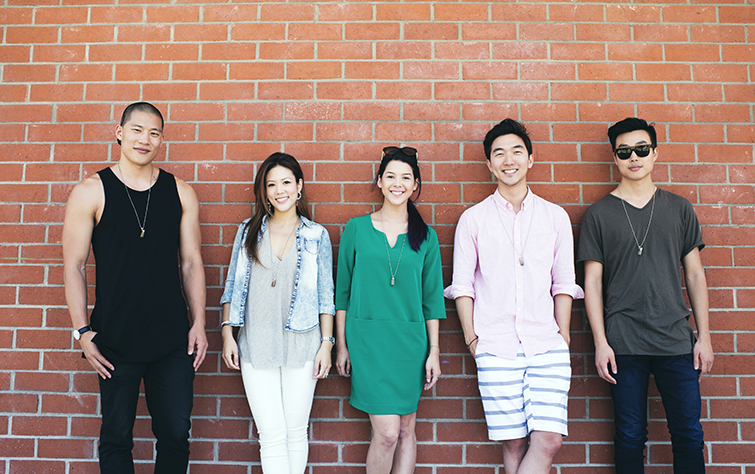 
How many people do you know who would literally give a stranger the shirt off their back? Would you?

It’s a tough question to answer, but Sonsern Lin—an alumnus of the School of Social Sciences business economics program and founder of clothing company Generosity Gang—wants to change that.

“I wanted to do something that allowed people to experience the feeling of giving,” he explains. “Our brand has always been, not so much focused on a specific cause, but focused on how to inspire the person consuming our product to make generosity a part of their lifestyle.”

The one-man show behind the newly rebranded company—they used to be called P1124—hopes to help people appreciate the resources they have access to while encouraging them to live generously in every aspect of their lives. Their unique model allows customers to choose a product based on a cause that is meaningful to them and offers wearable reminders to practice giving in everyday life. The company’s current initiatives—Choose Hunger, Choose Water, and the Sweatshirt Off Your Back campaign—each boast a unique cause and products to appeal to different people and types of giving.

For Lin, the taste for giving was instilled in him when he was young, though he didn’t realize it at the time. Looking back, he can see how his father’s selfless acts of generosity—donating his car to a family in need instead of trading it in, and taking Lin’s old computer and buying his son a new one for example—inspired his future actions.

“I didn’t think anything of it when I was a kid, but now I realize that my dad, and my mom too, were setting this example of radical generosity,” he says.

With this legacy of giving in place, Lin arrived at UCI and soon joined The Edge, the college-aged group from Irvine’s Newsong Church. There he was able to meet fellow UCI students and even see how his peers incorporated giving into their daily lives. Then, during his sophomore year, he had the idea to give away half of his belongings.

“Because of my faith I was really trying to understand what it means to love others as much as I love myself,” he remembers. “So my sophomore year I decided that I was going to try to live this out in a practical way by sharing half of my possessions and half my money with other people. So it started this crazy experiment of giving things away.”

Lin started by giving away duplicates of things he already had; a skateboard, extra clothing, even his spare laptop. Sometimes he would post the items on Facebook, other times he would offer them to people he knew, and it didn’t take long for him to realize how good giving feels.

“I started buying clothing just so I could give it away because it was so fun,” he says.

One t-shirt he purchased was particularly popular among his friends, but he couldn’t afford to buy one for each person that requested one. Instead, he went online and figured out how to design and make his own. After the second batch he had even more requests, and that is when the idea of making and selling clothing to support giving first came to his mind.

“Instead of just losing money, I realized I could sell the shirts to fund giving other things away,” he says. “So that’s when the idea of a clothing company started. In the beginning I gave people two shirts so they could have one and give one away, and then we transitioned into the new model.”

This new model became what is now the ‘Sweatshirt Off Your Back’ campaign. Once a sweatshirt from that campaign is purchased, the customer is encouraged to give it away to someone who may need it more. If the original customer writes in with their story, Generosity Gang will replace their item free of charge.

These stories are truly motivating for Lin, and they show just how far his movement has traveled. In fact, one of the first stories he received was all the way from the east coast. A young woman wrote to him about how she was standing in the cold, waiting for her after-school ride. A stranger walking by noticed and took off his sweatshirt and handed it to her. After explaining the meaning behind the movement, she was very touched. After a few weeks of wearing the sweatshirt, she passed it on to a homeless man in the park near her home. She believes that he eventually passed it along as well.

“That was one of the first stories we received and it was really inspiring,” Lin says.

Though some could argue that by replacing the item, the act of giving is tainted—it’s not much of a sacrifice if you know you will get another item for free—Lin hopes that by offering people the opportunity to try giving risk-free, they will realize how rewarding it is and be encouraged to make it a part of their every day life.

“If we are honest, a very small minority of us would be selfless enough to give away the sweatshirt we just paid $50 for,” he says. “This is because we have not yet experienced the joy of giving.  We want to create that first taste because we know that once people understand it, generosity will become a lifestyle.”

Generosity Gang’s other initiatives, ‘Choose Hunger’ and ‘Choose Water,’ offer equally stylish products for purchase, but ask that the wearer use the products as a daily reminder to make conscious choices regarding what they eat and drink. The wearer can then reallocate any money saved to a related cause.

Customer’s who Choose Hunger, for instance, purchase a specially designed street-style sweatshirt. They are then encouraged to mark their names and a number on one of the spaces on the shirtsleeve. This number represents the number of times that the wearer pledges to “choose hunger”—meaning reallocating funds from a meal to donate to those in need.

“For instance, this past week I went to McDonald’s,” Lin shares. “Instead of getting a whole meal—which I didn’t need—I skipped the French fries and soft drink. It saved me about three dollars that I then reallocated to donating food.”

The Choose Water initiative utilizes the same concept, but offers a necklace instead (offered in multiple lengths) and asks wearers to ‘choose water’ when dining out. Soda or iced tea typically runs for around three dollars in a restaurant, so one person could raise more than $20 in a single week just by choosing water for one meal per day.  Lin’s goal is to raise approximately $10,000 to build a well through Charity Water.

“We’re not telling people they should stop spending money on clothes for a year,” he says. “And you’re not spending any more money than you would normally, you’re just making a choice to give up something small to start helping people. Those little things, if we get a lot of people doing them, can add up to have a great impact.”

Lin hopes that in time, he will be able to make an even greater impact with Generosity Gang. He plans to keep evolving the company, offering new products and new initiatives to keep customers intrigued and also to keep his creative mind working.

“I’m all over the place—always having new ideas or new inspirations. So I think the heart of Generosity Gang, to inspire generosity, will always stay the same, but the initiatives we’re running will always be changing with the season.”

We’re anxious to see what he comes up with next.