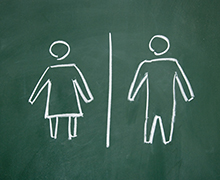 
Since the early 1960s, the percentage of women in the workforce has grown from 38 percent to 58 percent. During this time, women have made considerable contributions: they are to thank for discovering the BRCA1 “breast cancer gene,” for isolating the human immunodeficiency virus responsible for AIDS, and for making breakthroughs in embryonic stem cell research in mice that led to its use in humans. Nationally, women account for more than half of the U.S. population, lead men in educational attainment after high school, and are growing in career participation in every industry tracked by the Bureau of Labor Statistics. Yet women continue to lag behind men in key areas, one of which includes higher education tenure-track faculty positions – college professors.

“We still see considerable gender segregation in occupations: women continue to be employed in different occupations than men, and men tend to be more prevalent in many of the top positions within occupations,” says Judith Stepan-Norris, UCI sociology professor and expert on the sociology of work. As UCI’s Vice Provost for Academic Planning, she has been a key proponent of campuswide efforts to make inclusive excellence a priority.

Beginning in the early 2000s, UCI made gender inequity a priority by securing an Institutional Transformation grant from the National Science Foundation to create the ADVANCE program. Aimed at increasing women’s representation among tenure-track faculty in the STEM – sciences, technology, engineering and math – disciplines, UCI supplemented the grant to extend its coverage campuswide.

“The Irvine model of institutional transformation features peer-to-peer engagement led by trained faculty equity advisors and robust attention to removing the hurdles and barriers to gender equity in the search and advancement processes,” she says.

Since 2006, Douglas Haynes, Vice Provost for Academic Equity, Diversity, and Inclusion, has directed the ADVANCE program with the aim of closing the gender gap and promoting faculty diversity, especially among under-represented minorities.

“In the early ‘90s, women represented only 20 percent of the faculty at UCI. By 2009, that percentage rose to over 30 percent, and by 2014 to 34 percent,” says Stepan-Norris. “Much of the accelerated increase is attributable to the 2001 establishment of the ADVANCE program.”

An analysis of the program, co-authored by Stepan-Norris and Jasmine Kerrissey, assistant professor of sociology at the University of Massachusetts, Amherst, is published in Sociological Perspectives. The researchers compared women’s representation in faculty positions at UC campuses from 1993-2009 using descriptive statistics and regression analysis.

“Comparing UCI to 8 sister UC campuses gave us an excellent group against which we could measure the program’s success,” says Kerrissey. “And by beginning our analysis in 1993, we could relate the percent of women present on campus and newly hired in the years before ADVANCE was implemented to those numbers post program implementation at UCI.“

In terms of overall women’s representation, all UCs showed an increase with UCI reporting the largest, most notably in the years following implementation of the program.

“The peer review process in faculty hiring lends itself especially vulnerable to implicit bias and it’s an area where the equity advisors have made a great impact,” she says.

Research suggests that female candidates may be disadvantaged in work environments that are dominated by males. Culturally dominant gendered beliefs may come into play in the application process, the interview process, and in hiring decisions.

“Challenging peers with charges of bias in the hiring process risks damage to collegiality, advancement, and possible collaborations. But when an equity advisor of senior stature has considerable authority over the process, biases are more likely to be addressed.”

“When equity advisors who have knowledge, influence and credibility put their energies into systematically overseeing and, when necessary, challenging recruitment committee deliberations, they made an impact,” she adds.

The program has led to development of a graduate student-focused program, Diverse Educational Community and Doctoral Experience (DECADE), similarly aimed at increasing the number of women as well as underrepresented minorities receiving doctoral degrees at UCI.

Of note, says Stepan-Norris, is that the program does not systematically involve equity advisors in the retention process. As such, UCI fared more like other UCs in retaining female faculty.

“This is an area where equity advisors could be utilized and perhaps impact retention rates,” she says.

“We have a ways to go in closing the gender gap and fully realizing inclusive excellence, but programs like this can be utilized as an effective road map for moving us toward that goal.”