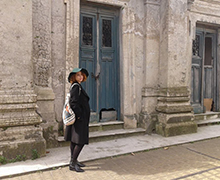 
As she approaches her third year in UCI’s anthropology program, graduate student Megan Neal is celebrating what she considers her biggest accomplishment since arriving at UCI—her receipt of a National Science Foundation Graduate Research Fellowship.

The fellowship, which awards Neal a total of $44,000 over the course of three years, will allow her to delve into her research topic that combines two interests: her love of other cultures and her passion for understanding disability. Specifically, she plans to examine the way people in Bolivia understand and treat disability. The award is a tremendous honor, and it’s made even sweeter by the fact that Neal earned it while managing a disability of her own.

Though she had kept her Attention Deficit Disorder diagnosis fairly under wraps until now—she didn’t even mention it in her application for the NSF fellowship—Neal has decided to open up about her diagnosis and her time spent in the foster care system, both to help explain her personal interest in her research and in the hope of bringing awareness and support to other students with disabilities. She notes that ADD in particular is widely considered overly diagnosed, which can impact the way outsiders view those affected by it.

“While I can only speak from my experiences, I do feel that there has been a kind of general diminishing of this diagnosis,” she says.

Whether or not the condition has become overly diagnosed, its severity is very real for Neal, who wasn’t diagnosed until the age of 15. She recalls struggling with concentration and following directions as a child, but the older she got, the bigger the challenges became.

For instance, Neal remembers a high school writing exam that she failed three years in a row. “I never understood why I couldn’t get a passing score,” she says. “Then in my senior year, my A.P. English teacher had us do a practice essay where we wrote an argument and a counter argument. I realized I’d never read the directions on the exam correctly and thus never wrote a counter argument.”

The next time she took the exam, she received a perfect score.

Situations like this made school challenging for Neal, but she says she never felt truly debilitated until it came time for college. Her ADD, coupled with her time spent in the foster care system, presented her with challenges that most teenagers who are in stable living situations don’t have to face.

Though she got herself admitted to college with almost no assistance—an amazing feat for any high school student—she sent her FAFSA to the wrong location and was therefore denied financial aid. She had to decline her college acceptance due to lack of funding.

While she was devastated at the time, instead of giving up on her dreams, Neal found a new way to achieve them. While living in transitional housing, she chose to put college on hold and save money to travel the world. After crisscrossing the globe and living in China and Germany for three years, she returned to the U.S. to attend community college before heading to UC Berkeley for her undergraduate career. And though she made it to college after living in foster care, she knows that very few others do.

According to Neal, only half of foster care children will graduate high school, and only two to six percent of those who do will go on to get a college degree.

“Numbers like this make me think about the complexity of something like disability,” she says. “While you may have certain experiences that make it feel like it’s impossible to fit in, your experiences with systems—social, educational, economic, etc.—can also be incredibly disabling. In reality, it’s often difficult to see where one source of disability ends and another begins and, more importantly, how to access sources of enablement.”

This lack of transparency is why she wants to speak out regarding some of her experiences within the system. She never had a role model who had gone on to academic success after foster care, and she hopes to show other students in the system that going on to higher education is possible.

That’s not to say it was an easy road, however. Even having made it past the trials of living in the foster care system, Neal’s ADD made certain tasks that were simple for others very time-consuming for her. She eventually accepted that extra time for test taking was a necessity, and she gathered the courage to request disability assistance from Berkeley. This helped with her courses, but moving on to graduate school at UCI and the faster-paced quarter system brought it’s own challenges.

“In my first year of graduate school, I had to make so many drafts of my essays because the disorganization of my thoughts was so pervasive that by the time a majority of my papers made any sense, they were late,” she explains. “I’m still incredibly slow but, little by little, I’m getting faster.”

She credits UCI’s grad students, faulty, and staff for giving her the support she needed to succeed—even without knowing her diagnosis or personal struggles. In fact, that support system was one of the reasons she chose to attend the campus in the first place.

“As someone who experiences disability, I really don’t think I could have lasted in another school,” she says. “The level of mentorship you receive and give within my department is, I think, unparalleled by any other department in the nation.”

Now that Neal has found a nurturing educational environment, she is able to turn more of her attention to her research. After falling in love with Bolivia during a 2011 trip, she decided to make it the focus of her research. She is now examining the legal mandates that require Bolivians with disabilities to participate in therapy so that they can better contribute to the country’s economic development. By looking at how people practice therapy and interpret laws for people with disabilities, she hopes to see how Bolivians are expanding on what it means to be a national and global citizen.

Neal notes that it is her greatest hope to draw attention to the many actual and possible meanings of development and, ultimately, contribute to ongoing global efforts to reduce the stigmatization of people with disabilities. For example, Bolivia is in the process of expanding its social services programs to account for unique individual progress instead of treating each citizen, regardless of disability, the same. Though changes like this are happening slowly, they illustrate a shift in the public’s understanding of disability.

As part of her research, Neal hopes to observe a specific therapeutic center to see how these modifications are being applied, and how these shifting medical practices are connected to new legal and public definitions of disability.

“Disability theorists have shown us that ‘ability’ is a definition that not only changes across time and geographical location, but that anyone can become ‘disabled’ due to illness or aging,” she explains. “The idea that some people bear that often stigmatized marker explicitly in everyday life sheds a bright light on how ideas we have about normalcy and ability may actually be inhibiting people’s potential.”

She is also placing heavy focus on South America’s “vivir bien” or “good living” movement, a concept adapted from the Quechua people of the Andes. Simply put, vivir bien stresses the importance of a balance between people and nature and calls on South Americans to work collectively to preserve both ecological and cultural diversity. It promotes an alternative model for development that, when put into conversation with Bolivian disability rights activists, might offer new ways to think about diversity, empowerment, and body-environment relationships.

In addition to the potential implications of her research, Neal is passionate about directly mentoring other students with disabilities or those within the foster care system who hope to attend college. And though she still experiences moments of frustration, she has learned to appreciate the way her mind works and her time in the system—even if they’re not the norm.

“On my personal road to improvement, a lot of my own work now comes down to me having a greater sense of confidence in the way I am instead of always aspiring to be otherwise,” she says. “This task is both a struggle and a privilege. The thing I really love about anthropology is that you have to really push yourself to become sensitive to people’s unique experiences. It’s a kind of rigorous empathy that has the potential to show you that everyone is a teacher.”

It’s this kind of mindset that she hopes to pass on to other students who may be struggling with disabilities, ADD-related or otherwise. She will be mentoring new students through UCI’s Student Support Services in the upcoming year, and she encourages anyone who has had similar experiences to reach out to her, whether to seek advice or just to talk.

“There’s a tremendous amount of talent and insight in these populations,” she says. “They need to be actively included in questioning and improving the systems in which they participate.”

And undoubtedly with her research and dedication, Neal will play a part in improving these systems as well.

Neal can be reached at mdneal@uci.edu.