Order of the Laurel 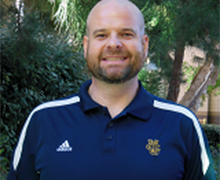 Order of the Laurel


Kurt Hessinger, academic counselor in the School of Social Sciences Undergraduate Student Affairs Office, is the 2015 recipient of UCI’s Order of the Laurel award. Awarded by UCI’s Greek honor society, Order of Omega, the recognition annually highlights a campus individual for their outstanding commitment to the students affiliated with UCI’s Greek system.

Hessinger graduated from UCI in 1997 with degrees in political science and sociology. While a student, he was a peer advisor in the Social Sciences Counseling Office. After receiving his bachelor’s, he stayed on for a year as an associate counselor. From 1998-2005, he worked as an academic counselor in the Donald Bren School of Information and Computer Sciences. He left UCI in 2005 to work as the associate director of transfer programs in Cal State’s Chancellor’s Office, a position he held until 2007 when he returned back home to UCI and the School of Social Sciences. He has since received his master’s in counseling from Long Beach State with a specialization in student development in higher education. He currently serves as supervisor of social sciences’ academic peer advisors and as the primary advisor for student athletes within the School of Social Sciences, a student population which social sciences boasts the largest among all schools on campus.