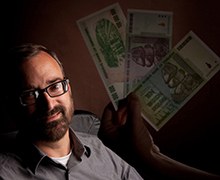 
Helen Keller, Sacagawea and Susan B. Anthony – sounds like pretty great company to keep. The Department of the Treasury is getting ready to add another female face to U.S. currency, and will be making history with its move to put a woman on the new $10 bill – the first U.S. paper note that will feature a female. To help in the bill redesign, Treasury is tapping the expertise of social sciences dean and anthropology professor Bill Maurer.

Maurer is an internationally recognized expert on the anthropology of money, finance and law, and has written on everything having to do with money and its technologies, from ancient coins to credit card imprinters. He’s the author of four books, including Mutual Life, Limited: Islamic Banking, Alternative Currencies, Lateral Reason, which won the Victor Turner Prize in Ethnographic Writing in 2005, and the soon to be released How Would You Like To Pay? How Technology is Changing the Future of Money. He is also the editor of six collections serves on a number of editorial boards, and is a member of the National Academy of Sciences’ Board on Behavioral, Cognitive and Sensory Sciences. In 2013, he helped The British Museum develop its Money Gallery which puts the history of money around the world on display. Maurer has served in a number of administrative roles at UC Irvine while founding two major research centers – the Bill & Melinda Gates Foundation-funded Institute for Money, Technology & Financial Inclusion and Intel-supported Intel Science & Technology Center for Social Computing – and collaborating across campus, with the business community and with the nonprofit sector. He joined UC Irvine in 1996 as an assistant professor of anthropology and served as chair from 2006 to 2010. In July 2011, he became the school’s associate dean of research and graduate studies and in 2013, he was named dean. His research has been consistently supported by the National Science Foundation. His most recent funded projects examine how new digital payment systems work with or against existing social relationships, the shifting regulatory and legal debate over mobile phone-based payment services, and the use of the technology underlying the cryptographic currency, bitcoin, to build alternative financial and legal infrastructures. He earned a master’s degree and a doctorate at Stanford University and a bachelor’s from Vassar College. He holds courtesy appointments in the UC Irvine School of Law and the School of Social Ecology’s Department of Criminology, Law & Society.

Maurer and a group of academics, curators and other experts on currency will be meeting with Secretary of the Treasury Jacob J. Lew on August 5th at the National Museum of American History of the Smithsonian Institution.