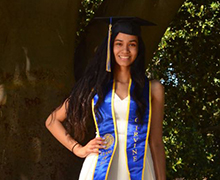 
For Alejandra Sanchez, choosing her educational path required more than asking what she wanted to study or where she wanted to study it. The sociology and education sciences major’s journey at UCI—and her path being granted the Outstanding Undergraduate Thesis Award—was shaped by another, much more complex question: Why?

Sanchez took on her first year at UCI with as much enthusiasm as any college freshman. She lived in the campus dorms, attended classes, participated in volunteer opportunities and made new friends. But toward the end of that first year, she began to wonder why she was fortunate enough to be working on a college degree when her parents, family members and friends from her hometown had such different experiences.

“Why was it that despite having the same blood and being raised with the same values I was attending a university, and yet had relatives around my age imprisoned and pregnant?” she asks. “How was it that I was able to live on a beautiful college campus, get fed by the cafeteria chefs and have my living quarters cleaned by staff when my mother at my age was working at Kmart and living in a one-bedroom apartment with her eight siblings and two parents?”

Instead of brushing these thoughts aside, Sanchez strayed from engineering—the major she originally planned to pursue—to explore possible answers. She began taking social sciences courses where she found that other researchers had the very same questions that she did. So, after deciding to officially make the switch to sociology, she started studying the different factors that affect individual opportunities.

To further her involvement in the School of Social Sciences, she applied—and was accepted into—the honors program headed by Sam Gilmore, sociology lecturer. The program encouraged her to think in new ways, and guidance from Gilmore as well as Sanchez’s mentor, sociology associate professor Susan Brown, eventually led her to her undergraduate thesis topic, which addressed the effect that a mother’s citizenship status has on her children’s political engagement—specifically in Mexican-Americans.

Her paper, which was honored with the undergraduate thesis award based on its originality and the quality of Sanchez’s research and writing, found that individuals whose mothers were undocumented displayed significantly lower levels of political engagement. However, she suspects that these levels may be affected by education, as those whose mothers were undocumented also reported lower levels of educational attainment, which has been shown to significantly effect political engagement in past studies.